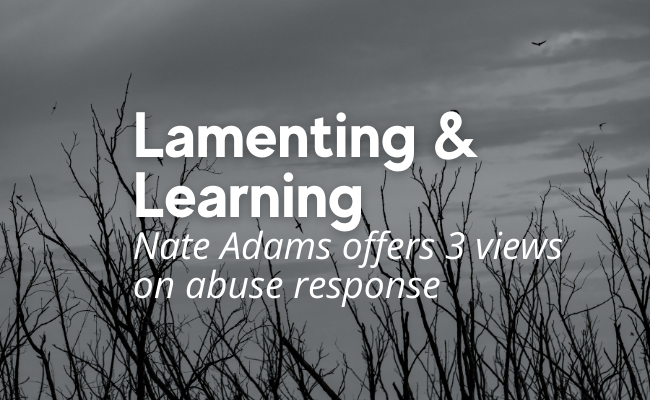 In the period between release of the third-party investigation of the SBC Executive Committee’s handling of sexual abuse claims in the denomination and the SBC Annual Meeting where messengers will act on recommendations for reform, several things became clear.

Everyone has an opinion on the report and its findings. Not everyone who has commented has read the report. More than one response is needed because of the various people and groups affected by abuse and responsible for action. I will offer three.

The report said in part, “Our investigation revealed that, for many years, a few senior EC leaders, along with outside counsel, largely controlled the EC’s response to these reports of abuse. They closely guarded information about abuse allegations and lawsuits, which were not shared with EC Trustees, and were singularly focused on avoiding liability for the SBC to the exclusion of other considerations.”

The report ordered by messengers to the 2021 Southern Baptist Convention in Nashville was produced after considerable investigation by Guidepost Solutions of claims of sexual abuse made to the EC between January 1, 2000 and June 14, 2021. At 288 pages, it’s not a quick read. But I would urge Baptist pastors, church members, and other concerned parties to read at least the primary sources of information, in order to fully understand the facts and consider relevant actions that all of us can take to prevent sexual abuse and to minister to survivors and their families.

As a leader in a Baptist network, I want to speak a brief word to three specific groups:

First, let me speak to survivors of sexual abuse. While only God can heal the deep hurt you have experienced, please know that many more of us have now entered into your ongoing pain. I hope you can read in the report and in the many responses since then the grief and the lament over sexual abuse, and the angry outcry of God’s people when it is exposed in the context of a trusting church relationship.

You may well have felt alone and abandoned during the abuse you experienced, and perhaps doubly so when some you trusted with the information did not really help. But the call for this investigation and the demands for change since then demonstrate that God’s faithful people desire transparency, and justice, and defense of the powerless.

Second, let me speak to pastors and church leaders. This report urges each and every church to compassionately listen and minister to abuse survivors, and to proactively ensure that its leaders and ministries are safeguarded. Frankly, when abuse is reported in a church setting, churches often need to be quicker to rely on law enforcement and other professionals and not assume their own competence in this area.

Though the instances of abuse as a percentage of the number of churches and years may not seem large, they are also undoubtedly underreported. No church should assume “it can’t happen here.” Each church should have vigilant policies and practices that protect the vulnerable from predators, and that protect its leaders from even the appearance of impropriety.

Finally, let me speak to networks of churches and their leaders, and in doing so I am speaking to myself. While the church may be on the front line of abuse prevention, and while Baptist church autonomy may sometimes limit network influence or even awareness, church networks still bear responsibilities in this area.

Training and consulting in prevention is certainly an important role. Helping churches identify qualified counselors may increasingly be another. And we must somehow find more effective and comprehensive ways for churches to share information about offenders who may seek to move from one church setting to another, or one network to another.

Here in Illinois, our network leaders and staff are prayerfully studying the task force report and its recommendations, and also reexamining our training and systems, and the prevalent practices in churches, to ensure we are doing everything we can to make sure that churches remain the safe haven of trust, healing, and hope that our broken world needs.

A hotline has been established to allow those affected by sexual abuse within Southern Baptist churches. The number is (202) 864-5578.