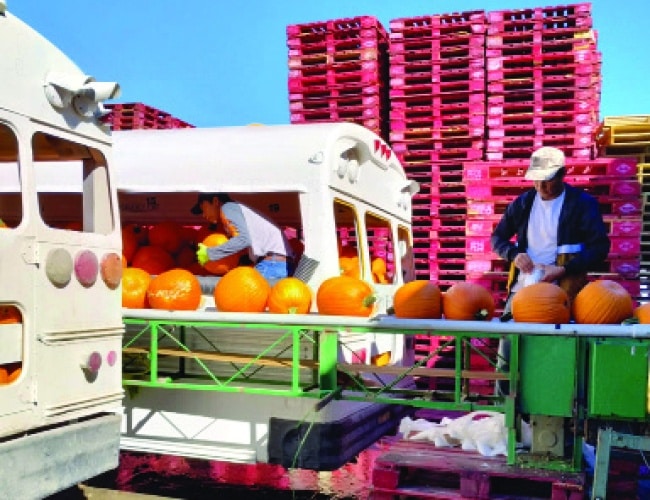 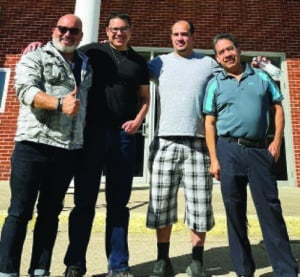 Pastors Tony Muñoz, Jonathan de la O, Ricky Alcala, and Rene Corona teamed up with leaders from Ten Mile Baptist Church in McLeansboro to share the gospel with about 100 workers in Southern Illinois for the pumpkin harvest.

One of the migrant workers lingered for a few minutes after the meal. Juan Carlos wanted to talk with a pastor.

“My hometown was attacked,” he said, holding out a cell phone. “My parents escaped,” the young man said in Spanish, “but my wife and children are trapped there, and my brothers are missing.”

The pastor was stunned by the photos. Everything was destroyed, and the man talking to him was distressed. “When did this happen?” Pastor de la O asked.

“Yesterday. I don’t know what to do.”

With his family 2,000 miles away, Juan Carlos was stuck in Illinois, harvesting pumpkins. The pastor searched for a few comforting words and offered to pray. When the team planned a weeklong outreach to migrant workers in Southern Illinois, the pastor from Chicago didn’t expect to see such obvious spiritual need. Nor did he see in the moment that this was the machinery turning for an unexpected harvest of soul

At a family lunch one a year earlier, Hunter DeJournett mentioned that he wanted to learn Spanish. The teenager from McLeansboro had recently started working at a pumpkin farm. “I want to talk to the migrant workers about Jesus,” he said.

Migrant workers from Mexico and Central America come to Illinois every fall to harvest pumpkins. Illinois is the nation’s leading pumpkin producing state. The workers begin in Florida picking tomatoes and strawberries in early Spring, move eventually to Indiana for watermelon season, and come to Illinois in late September. Some of them are away from home for six months or more. 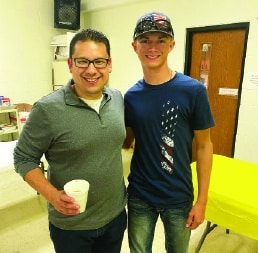 Hunter’s comment to his family might seem incidental to this story, if it weren’t followed by several other events that clearly are not coincidence.

Jared Pryer, a member of Ten Mile Baptist Church in downstate McLeansboro, served in the delivery. Talking with Pastor de la O, he remembered the comment made by his nephew, Hunter.

“Does your church do any mission work outside the city?” Pryer asked. The pastor responded no. “Would you consider bringing people to Southern Illinois to work with migrant workers?” His response was an enthusiastic yes.

A short time later, Pryer was talking to a local farmer who had recently begun attending Ten Mile church. Fairly new to pumpkin farming, Leon Adams and his wife were praying about how they could minister to migrant workers who harvested their crop.

“As a farmer, it’s hard for me to go to the nations, but they’ve been coming to me,” he said. Adams joined Pryer on his next trip to Chicago to deliver vegetables to de la O’s church. The farmer and the pastor quickly connected over their concern for lost people. The Chicago pastor shared how his father-in-law in El Salvador worked as a migrant, traveling to California to follow the harvests and to feed his family back home. 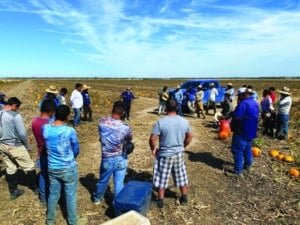 “We didn’t know how this was going to come together,” he said. “At some points, it looked like it might not.” But when de la O contacted two Latino pastors in Chicagoland, he found eager partners. Rene Corona of Iglesia Bautista Alfa y Omega and Ricardo Alcala of Iglesia Camino Al Cielo brought unique teaching and evangelism gifts to the mix. And Tony Muñoz of Iglesia Bautista Latina in Effingham would plan worship.

Hunter, youth from Ten Mile Church, and others volunteered to cook, deliver, and serve the food. Immanuel Church in Benton provided toiletries and work gloves. Sugar Camp Church in Mt. Vernon would host the traveling pastors. First Baptist Church of Centralia (a non-IBSA partner) graciously offered use of their fellowship hall. The church is located adjacent to the hotel where the workers were staying. IBSA supported the work with an evangelism event grant.

What developed over the course of a week was daily visits by the pastors to the fields. At lunch or during a short break, the pastors shared briefly and prayed for safety, in anticipation of three evening events that might provide times for sharing the gospel.

“The first night everyone was kind of quiet,” de la O said, “mostly wondering what this was and why we were doing this.” 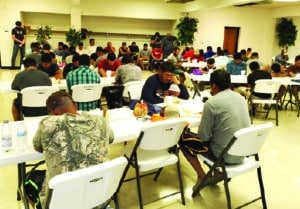 “We didn’t know ‘anglos’ actually cared for us,” one man said. “That’s not how we are usually treated.” But hot home cooked meals, worship and testimony, and gifts were well received, and even more so on the second night. Two men stayed afterward to talk with one of the pastors. Both prayed to receive Christ.

That’s the night Juan Carlos told de la O about his missing family. The next night, Juan Carlos found the pastor again. “My family is ok,” he said in Spanish. “My wife and children escaped, and my brothers are all alive. Thank you for praying!”

“I saw him standing over by the table with the gloves,” de la O said. “We asked the men who were interested in praying to stay a few minutes. I thought they all wanted work gloves, but they wanted to know Jesus.”

In all, 18 men prayed to receive Christ during the week. Before they left for the next harvest, Pastor Muñoz baptized two of them. “Pastor Tony kept telling us, ‘We have to disciple these men,’” de la O said. His excitement for God’s movement spills out as he tells the story. The team is making plans for next season.

And Hunter? After the dinner, he was collecting leftover gospel literature in Spanish to take to migrants on the farm where he works.

Their dedication to sharing the gospel—that’s no coincidence.