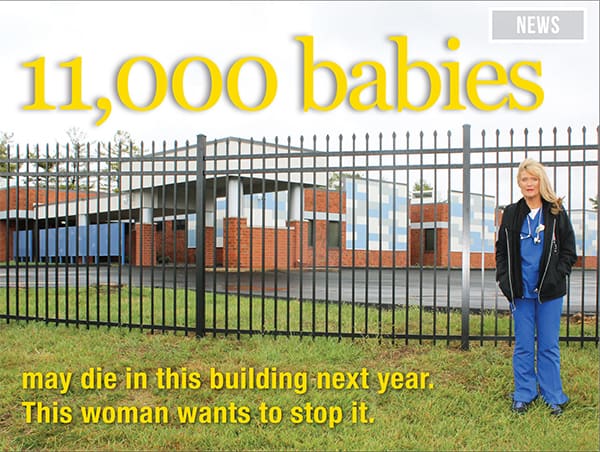 Fairview Heights | A massive new abortion clinic built in secret in Metro East Illinois is expected to open October 23 and draw more than 11,000 clients annually from a multi-state region.

The Fairview Heights clinic is just 13 miles from St. Louis, where officials have threatened to close the last remaining abortion clinic in their state. While Missouri and other Midwestern states have tightened abortion regulations, Illinois lawmakers have virtually deregulated the
industry, making the state a destination for women seeking to terminate pregnancies.

Planned Parenthood confirmed in early October it had built the 18,000-square-foot clinic, after a report by CBS News revealed the purpose of the rehabbed medical facility across from the St. Clair Square Mall. Local officials were uninformed of the specific nature of the center and expressed dismay when it became public. A representative also admitted Planned Parenthood created a shell company to obtain building permits, in order to avoid protests and possible construction delays.

Announcing the new clinic, Yamelsie Rodriguez, president and CEO of Reproductive Health Services of Planned Parenthood of the St. Louis Region, said, “The idea and the goal of opening this particular facility is to expand access across the region and to be able to serve not just the unmet needs for services in Illinois, but also Arkansas, Missouri, Indiana, and Kentucky.”

“Make no mistake: this new mega-facility is not a response to an increased demand, nor is it a gesture of care for women,” Illinois Right to Life Executive Director Mary Kate Knorr said when the center was announced. “This facility was created to fill the gaping hole they’re seeing in their bottom line.”

Knorr concluded, “The increase in pro-life laws across the country coupled with President Trump’s Protect Life Rule has undoubtedly had a devastating impact on Planned Parenthood’s abortion revenue. This is a money-making venture, and Illinois is the most abortion-friendly state in the country.”

“The falling abortion number is partly due to the ceaseless advocacy and ministry of the pro-life community in neighborhoods around this country,” said Russell Moore, president of the Southern Baptist Ethics & Religious Liberty Commission.

On a cloudy mid-October day in Granite City, Angela Michael is standing outside a women’s clinic that mainly provides abortions. Nearby a small clutch of protesters are gathered under umbrellas, praying for the end of abortion in the United States.

Dressed in scrubs, Michael, a former obstetrical nurse, and her husband, Daniel, operate a pro-life ministry called Small Victories Pregnancy Outreach. They have a van equipped with an ultrasound machine which they park outside. The Michaels offer to show pregnant women images of their babies before they enter the clinic.

“It used to be people from all 50 states knew Illinois for its steel industry,” she said. “Now abortion is what Illinois is known for.”

According to the Guttmacher Institute, there were 40 facilities providing abortions in Illinois in 2017, and 25 of those were specifically abortion clinics. Michael expects the Fairview Heights facility will become the largest operator in the nation.

The Michaels have been involved in this ministry for over 25 years. They say nearly 6,000 lives have been saved as a result of the ministry’s efforts. The couple has 13 children; two were adopted from women who chose not to go through with a planned abortion.

She urges others to take a stand for life by standing against the abortion clinics in the state. “You’ve got to come out here,” she said. “Just your presence out here makes a difference.”

The new Planned Parenthood building is fenced, making contact with clients more difficult, but larger protests are predicted once the abortion clinic opens.