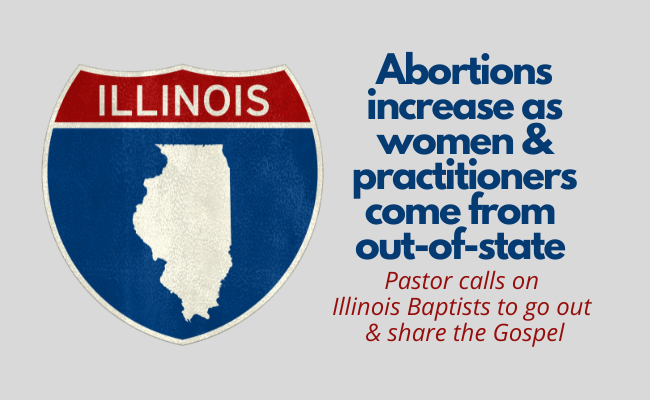 “A land of milk and honey.” In Exodus 3:8 God promised the Israelites He would take them out of Egypt where they were slaves into a land flowing with milk and honey. Since then, the phrase has become synonymous with a place overflowing with abundance or plenty. It’s not how pro-life Christians think of abortion-friendly states as such as Illinois.

But that’s exactly how Jennifer Pepper, the chief executive at Choices, a Memphis-based chain of abortion clinics, referred to the state of Illinois’ welcoming attitude towards those seeking and those performing abortions in an interview view St. Louis Public Radio in July. Choices is setting up a new location in Carbondale, also the location of Southern Illinois University, which is near the state’s southern border.

“Illinois feels a little like the land of milk and honey for us,” Pepper said. “Being surrounded by hostility is not new to us. It’s something we manage and deal with because our patients need access to abortion, and we’re committed to providing that.”

Immediately following the U.S. Supreme Court’s decision to overturn Roe, Governor J.B. Pritzker held a press conference announcing to women, “Illinois will be a safe haven for the exercise of your reproductive rights.” He and other elected officials flung open the floodgates to abortion practitioners and there they have remained.

Abortion advocates continue to point out how easy access to interstates 24, 55, 57, 64, 70 and an Amtrak station make Carbondale and the entire southern Illinois region ideal for women and their partners coming from southern and midwestern states where abortions are banned or more heavily restricted.

Some Illinois Baptists are joining with fellow Christians and pushing back. “Abortion is not a natural thing to do. It’s against the nature of humans to take another human life” said Phil Nelson, pastor of Lakeland Baptist Church in Carbondale. He’s pastored in the Carbondale area for nearly 47 years aside for some served in campus ministry at the University of Illinois at Champaign-Urbana.

Nelson believes to swing shut those floodgates Christians need to “pray to see awakening in their churches” to “get out into their communities and share the gospel.” He sees it as the only way to turn from the “loss of respect for [human] life we’re becoming hardened to. If we don’t have awakening, abortion will die as an issue. We must spend as much effort sharing the Gospel.”

Choices isn’t the only clinic moving to Carbondale which offers easy access to women from southern states where abortion is banned. Alan Braid, a Texas-based abortion doctor announced in July he would be closing his San Antonio Alamo Women’s Clinic to reopen it in Carbondale. He also closed a clinic in Oklahoma and will relocate it to New Mexico.

Nelson along with church and other pastors went to city council meetings where they spoke out against the abortion clinics being zoned and licensed in the city. Unsuccessful in that effort, they now attend the meetings but sit and pray silently. He and a coalition of pastors along with lay leaders also sent letters appealing to local businesses to not assist in the construction and setup of the new abortion clinics which have temporarily slowed their progress.

Clinics in the Metro East St. Louis area have already seen an increase in out of state abortion traffic. According to a report from KMOV-TV, the Fairview Heights Planned Parenthood Clinic saw an increase of 38% of out-of-state patients coming from Tennessee, Arkansas, Oklahoma, Texas, Mississippi, Louisiana, and Florida in July alone. The clinic also announced it expanded its hours from 8- to 10-hour days except for Saturdays. Plus, officials said if demand increases, they could go to 12-hour days and open on Sundays. Hope Clinic in Granite City also reported performing a higher number of abortions.

Quad Cities media outlets reported an abortion doctor from Milwaukee would be moving his practice to Rockford where he’s purchased two buildings – an old veterinary clinic and an acupuncturist office – to set up practice.

Meanwhile, the Indiana General Assembly voted in August to put a law in place to ban most abortions in the state, Jennifer Welch, president and CEO of Planned Parenthood Illinois Action, expressed outrage in a media release and reminded women about the strategically placed Planned Parenthood Clinic in Flossmoor, Illinois. Welch stated the clinic, which opened in 2018 near the Indiana border, was placed there “in anticipation that our neighbors would likely lose abortion access after the fall of Roe.” She said the clinic had already “seen its out-of-state abortion patients triple in the weeks following the Supreme Court’s ruling in June.” Indiana’s ban takes effect September 15.

The situation in our society is a “spiritual issue,” said Nelson. “God has put us all here now to live in this point in history for His purposes to bring the Gospel to people.”

“People are afraid of dying. The only hope they have is Jesus,” he said his voice growing with urgency. “People need to be out on the streets praying and sharing the gospel.”