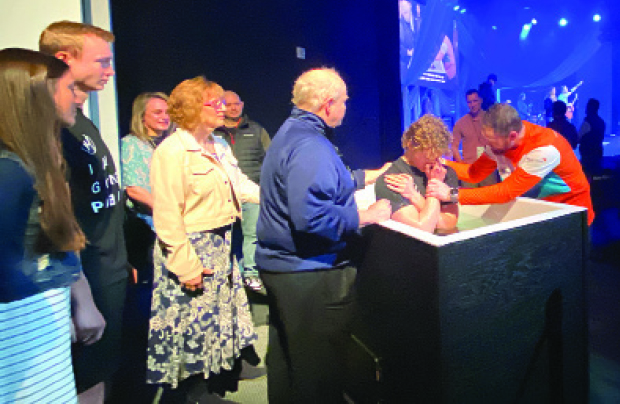 Recently I had the privilege of seeing two of my nephews baptized. Similar to our own three sons, brothers Joe and Elijah received Jesus as their Savior at different times, but then were ready to be baptized on the same day.

The church their family attends is fairly large, and its current building was once a sizeable retail store. So the baptistry was not front and center or behind the stage. It was a portable tank down front and off to one side. And the baptisms occurred during one of the worship songs.

But don’t let the location of the tank or the timing of the ordinance give you the idea that this baptism was a minor part of the service. In his opening welcome, the pastor beamed that “baptism is a big deal around here.” He then invested several minutes explaining immersion as a biblical picture of salvation and life transformation. He shared pictures of Joe and Elijah on the screen, along with statements of testimony from each of them. He encouraged everyone to join in and celebrate with these two young men and their families, and also to engage the baptisms as their own act of worship.

As the next song began, Joe’s and Elijah’s family and friends were invited to gather around the tank. As each of the boys entered the water, the pastor spoke quietly with them. A live video feed on the big screen allowed the entire congregation to witness the baptism and sing the words of the song. Then, as the pastor immersed each young man and helped lift him out of the water, the worship center erupted into prolonged cheering and applause by the hundreds who were present. It was a big deal!

The brothers embraced, the family gathered around them with smiles and hugs, and the congregation continued to cheer them on. In that very public, yet very personal moment, a powerful witness was delivered to anyone present who had not yet experienced baptism—or salvation. An invitation to learn more about what had just happened was offered, complete with an online registration option.

Though our cups were already pretty full, the morning was not over. Following the singing, the pastor delivered a thoughtful, biblical message on what it means, as a believer in Jesus, both to receive and to be filled with the Holy Spirit. It was a convicting challenge to those who had just been baptized, and to those of us baptized a long time ago, that believers are “raised to walk in newness of life.”

No matter how or where it is observed, baptism needs to be a big deal in every one of our churches. It deserves preparation, and explanation, and celebration. Maybe most of all it deserves invitation, not just to be baptized, but also for long-baptized believers to surrender afresh to the Lord and to be filled daily with the life-changing power of God the Holy Spirit.

Yes, baptism needs to be a big deal, and far more frequent, in every one of our churches. It celebrates the spiritual transformation of those being baptized. And it can also inspire new, spiritual motivation, even to those who don’t get wet.