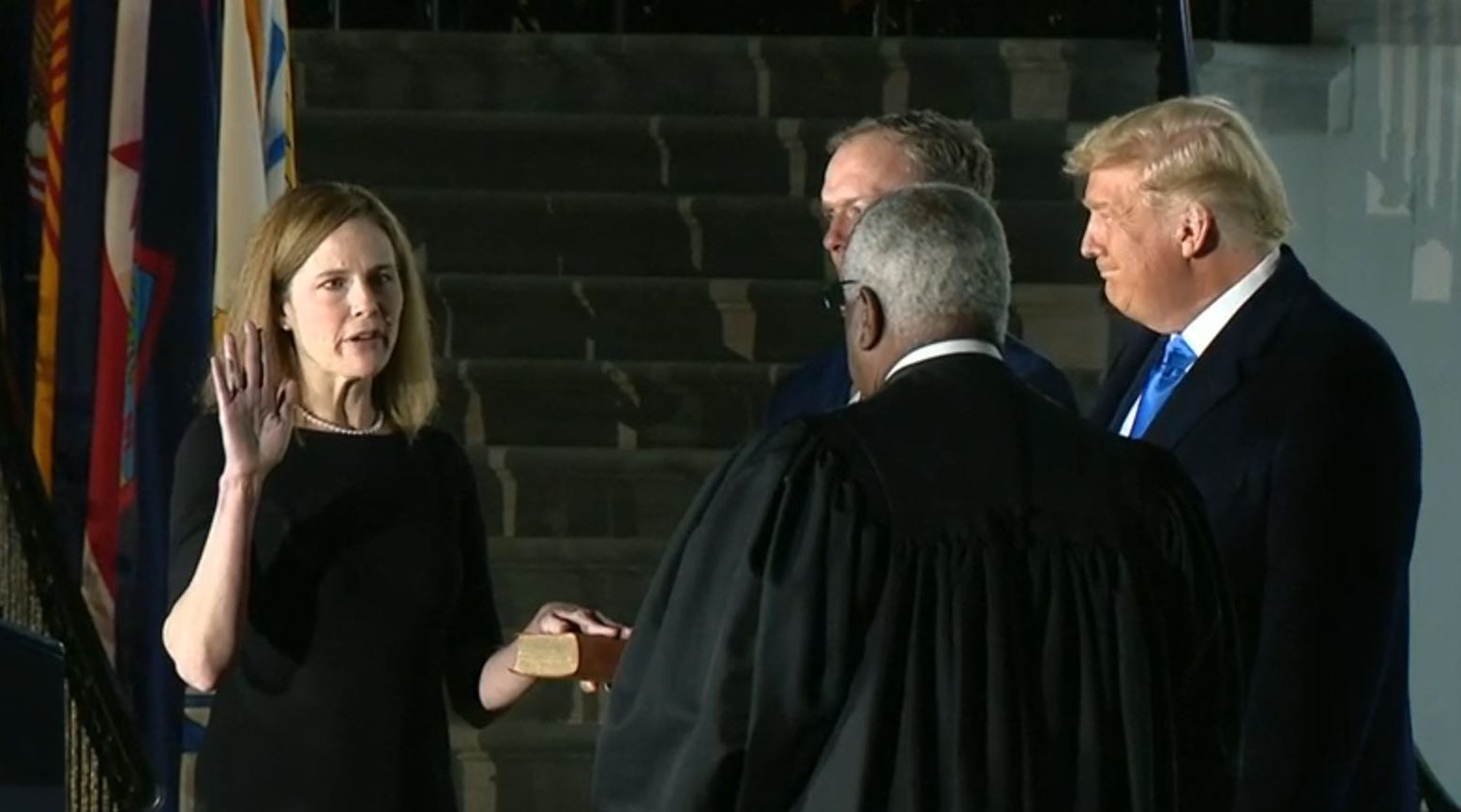 At a swearing-in ceremony outside the White House Monday night, new Supreme Court Associate Justice Amy Coney Barrett exhibited the same measured manner she showed during her confirmation. She also reemphasized her commitment to fulfill her duties to the court and the country independent of her own preferences. Christian leaders, including Southern Baptists, cheered her confirmation and urged prayer for Barrett and the court.

Barrett was sworn in by Associate Justice Clarence Thomas soon after the U.S. Senate voted to confirm her by a margin of 52-48. The vote was largely partisan—only one Senator, Republican Susan Collins of Maine, broke with her party to vote against Barrett.

The new justice is President Donald Trump’s third nominee to the high court, following Associate Justices Neil Gorsuch and Neil Kavanaugh. Barrett’s presence is believed to bring the court to a 6-3 conservative majority. Pundits have mulled how she will influence the court on matters of the sanctity of life and religious liberty, but Barrett spoke at her swearing-in about the crucial nature of judicial independence.

“A judge declares independence, not only from Congress and the president, but also from the private beliefs that might otherwise move her,” she said. “The oath that I have solemnly taken tonight means at its core that I will do my job without any fear or favor, and that I will do so independently of both the political branches and of my own preferences.”

Barrett’s Catholic faith was fodder for commentary during the nomination process, although it didn’t play the role in her confirmation hearings some had expected. She is the sixth Roman Catholic currently on the court, and the seventh who was raised Catholic (Gorsuch is now Episcopalian). She is also the fifth woman to serve, Trump noted, and the first mother of school-aged children.

“It is unqualified good news that Justice Amy Coney Barrett is now on the Supreme Court,” tweeted Illinois native Andrew Walker, an associate professor at Southern Seminary who formerly served on the senior staff of the Ethics and Religious Liberty Commission. “A jurist of her convictions and caliber is almost too good to be true. Put not your trust in SCOTUS justices (they do fail us), but this is reason for optimism.”

Walker’s tweet serves as a reminder of recent surprise opinions by conservative justices. Associate Justice Gorsuch and Chief Justice John Roberts sided with liberal justices in Bostock v. Clayton County, a ruling that extended the Civil Rights Act to include LGBT employees. Roberts also broke with conservative justices in June Medical Services v. Russo, which overturned a Louisiana requiring people who perform abortions to have admitting privileges at a nearby hospital.

Religious liberty is at the center of an upcoming case before the court. Fulton v. City of Philadelphia concerns whether the city violated the First Amendment by excluding Catholic Social Services from the foster care system.

Russell Moore, president of the Ethics and Religious Liberty Commission, urged prayer for Barrett and her fellow justices.

“Easy questions do not come before the Supreme Court of the United States; those cases are settled long before ever getting there. Therefore, all of us should pray for Justice Barrett, and for all eight of her now colleagues on the bench, that they would have wisdom and prudence and conviction as they make decisions on big questions that often affect the lives of generations of Americans to come.”