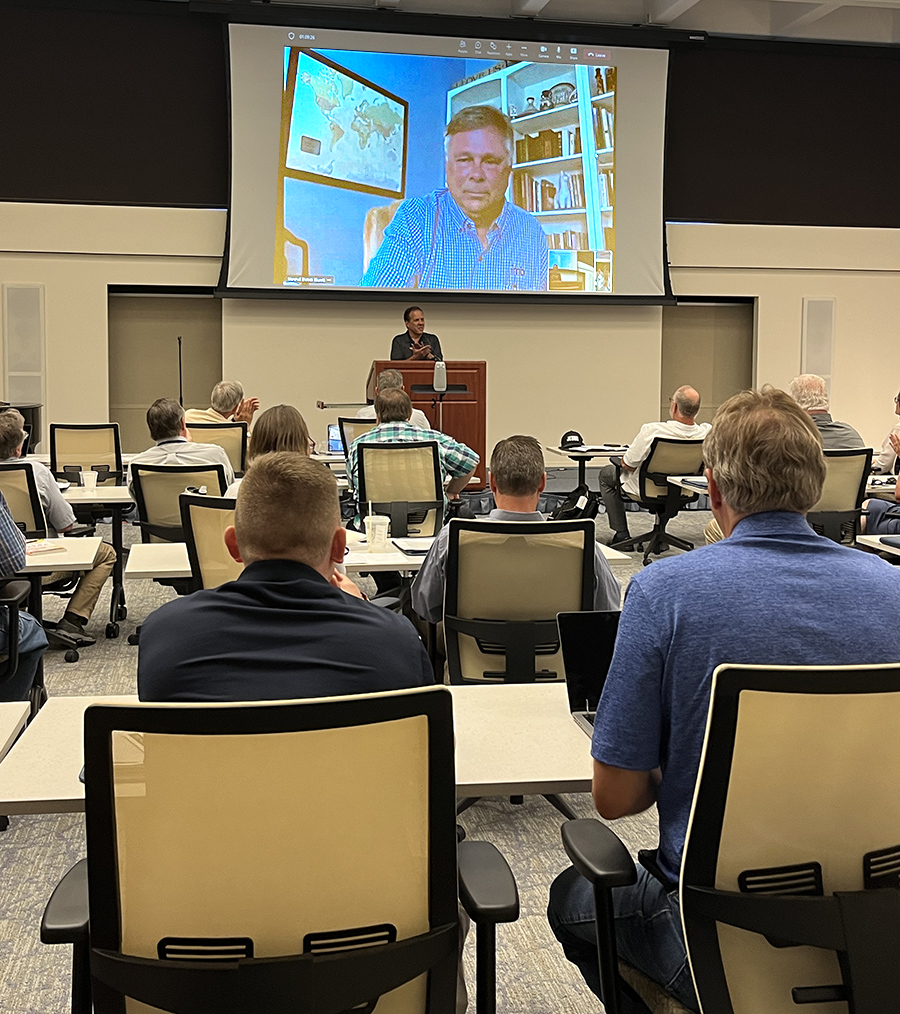 The South Carolina pastor who will head up the next round of sexual abuse reform implementation in the SBC spoke to Illinois Baptist associational leaders via livestream on the topic while they met in Springfield for their annual two-day gathering in Springfield. Marshall Blalock, pastor of First Baptist Church in Charleston, S.C., co-chaired the SBC Sexual Abuse Task Force (SATF) that presented its ground-breaking report on abuse in the Convention’s church which was accepted by messengers to the South Baptist Convention Annual Meeting in Anaheim in June.

Blalock said members of the Task Force had the opportunity to visit with abuse survivors and hear their stories. One thing he learned and shared with the leaders is that Christians “may have good intentions but can say the worst thing possible.” He said pastors may think they are asking helpful questions, but those questions can inadvertently cast blame on the person who has already been victimized.

“Very few folks are trained in how to talk to a trauma trained sexual abused person,” he said to the leaders on August 1. “You don’t ever blame them, even in inference by question. Having trauma trained counselors who can help you is important.” The Illinois Baptist State Association is in the process of identifying trauma-informed Baptist counselors in the state and a list will be made available soon as part of the IBSA Sexual Abuse Task Force’s report.

When putting the SATF’s report together, Blalock said they felt it was important to help states and churches see the role they would have at the local level, “not because we know everything.” He said it was “because we care about seeing the culture change, so we won’t have this happen in our churches.”

Blalock noted that while no one wants abuse to happen, “God forbid it does, we [the SBC Task Force] want to make sure you are able to help church abuse survivors and do it well.”

At his church, in addition to background checks, Blalock said before a person can volunteer, he or she must be known by the church for at least six months. Even then, volunteers are required to provide references and sit for interviews. For the safety of your children and grandchildren he said, “You need to go as far back as you can.”

According to Blalock, one-fourth of all women and one-sixth of all men in sitting in SBC congregations are survivors of sexual abuse. “Ministry to broken men and women is never a distraction,” he said. “If we began to be known as a church were involved in ministry to the abused, we would be blessed. There’s an opportunity to bring the gospel.”

He briefly discussed the new Ministry Check database that will be implemented by the SBC. Once the database is in place, ideally “someone won’t get convicted in Georgia and move to Illinois without people knowing.” However, participation by churches will be voluntary. Blalock is “hoping churches will care enough about their sister churches” to participate.

Blalock also announced to the associational leaders he had accepted SBC President Bart Barber’s invitation to chair the new Abuse Response Implementation Task Force (ARITF) that was decided on at the SBC Annual Meeting at Anaheim. He said Barber would be making more announcements regarding Task Force members later in the week.

That same day, Baptist Press reported Mike Keahbone, pastor of First Baptist Church in Lawton, Okla., would serve as the Task Force’s vice chair. Keahbone, a member of the SBC Executive Committee, also served on the 2022 Committee on Resolutions that proposed the resolution “On Lament and Repentance for Sexual Abuse.”

“Both of these pastors are well-respected by Southern Baptists, by survivors of sexual abuse, by state-convention leadership and by their peers,” Barber told Baptist Press. “I’m delighted at their willingness to serve and optimistic about the solutions that they will lead the Implementation Task Force to propose.”