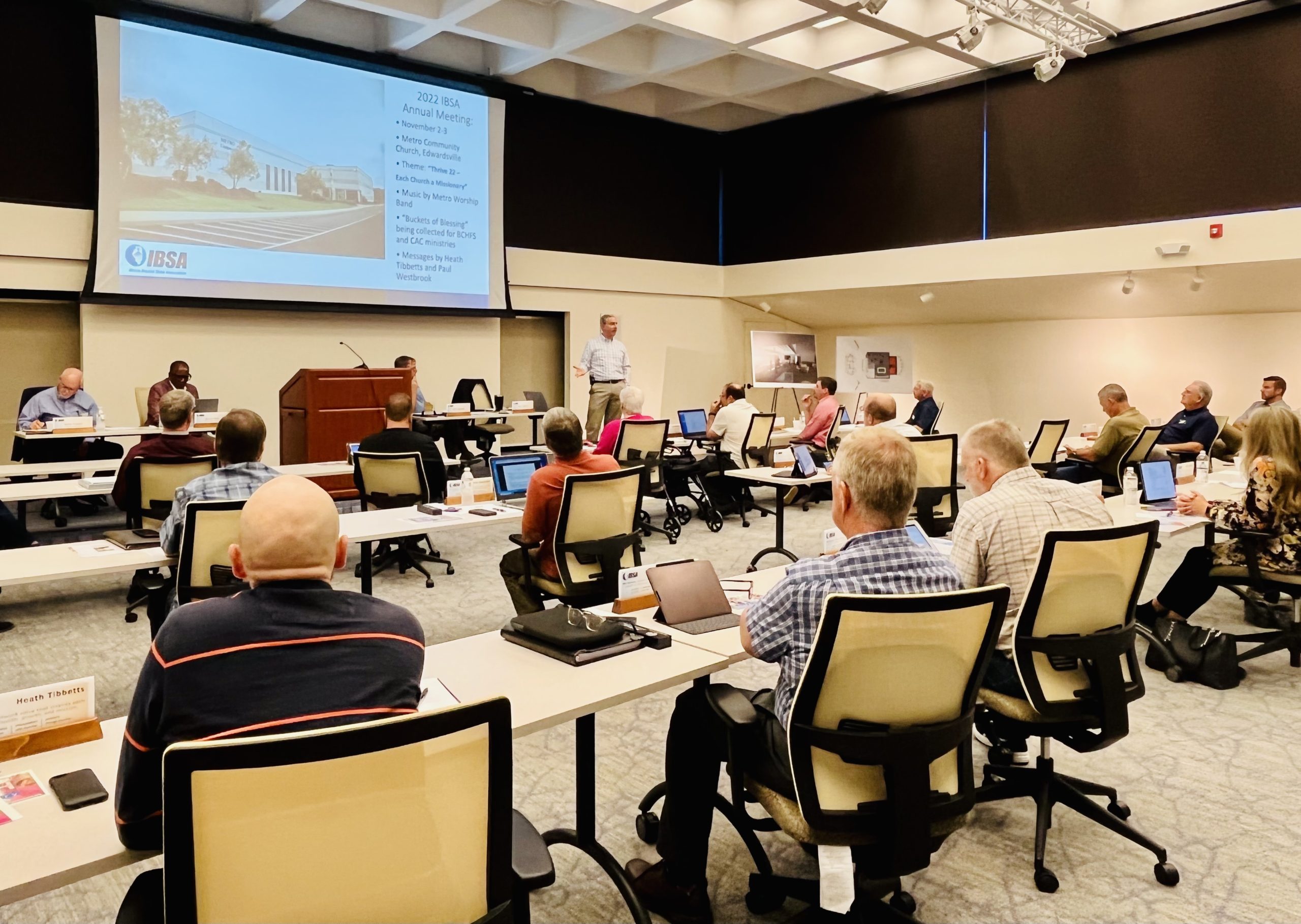 The IBSA Board of Directors met September 13, 2022 in Springfield.

The key word for 2023 is “shift,” IBSA Executive Director Nate Adams told the Board of Directors in their fall meeting Sept. 13—shifts in posture, processes, platforming, and a leadership pipeline. Adams also reviewed new recommendations for sexual abuse prevention and for the 2023 budget year.

“We’re not changing the main focus of IBSA’s work or the priority of the gospel,” Adams said, “but we recognize that programmatic answers alone are not as strong as they once were. Our teams need to listen and offer diagnostic tools to help bring answers.”

IBSA is completing a three-year analysis of its work with strategic planning for the future. “We certainly had some opportunities for improvement,” Adams said, “and this was money well spent.”

Central to the plan is a shift from plug-and-play ministry programs for Illinois churches to offering new process solutions more customizable to specific churches and communities. The “next step” consultation process unveiled at last year’s Annual Meeting will be expanded from 100 to at least 150 churches in 2023.

The long-range planning study started just before the Covid pandemic hit with its effects on church attendance and giving. Covid accelerated the trends already in place in churches: declining numbers that extrapolated over another ten years would leave Baptist work in Illinois significantly weaker.

“We are in a ‘climate change’ that I would describe as both cultural and generational,” Adams said. “We are in a shifting culture that demands shifts in how we do ministry” both at the state level and in local congregations. From a posture of humility, listening to the needs of churches, IBSA seeks to multiply its ministry by “platforming” more of the network’s leaders.

That will be required if approximately 900 churches have any hope of reaching more than 9 million lost people in Illinois. “We are seeking to define and model what it means to be an effective state network of churches for the future,” Adams said.

He pointed to recent successes, including more than 100 salvations at packed summer camps, and the Mission Illinois Offering that urges “each church” to see itself as a missionary. That will also be the theme of the upcoming Annual Meeting.

“We’re not going to be caught being irrelevant,” Adams said. “We’re going to be as ready for the changing times and changing climate as we possibly can.”

A state plan for sex abuse prevention in IBSA churches and ministry to survivors will be reported to messengers at the Annual Meeting. The SBC’s Sexual Abuse Task Force (SATF) made five recommendations to messengers at the national SBC Annual Meeting that included proposed actions by state conventions. IBSA, which already had a task force at work, quickly pivoted to address the national convention’s concerns.

“I want to reassure you that IBSA has studied abuse prevention and is being proactive,” Adams said.

Included in the IBSA proposal, which was developed by a staff team of six with input from outside professionals, are recommendations for training, identifying trauma-informed counselors, development of a self-assessment mechanism for churches to evaluate their abuse ministry, and actions the network can consider should a member church not deal responsibly with credibly accused perpetrators.

IBSA President Heath Tibbetts previewed for Board members his plans to appoint an ad hoc committee consisting of members from the IBSA’s Board, Credentials Committee, and Constitution Committee that would give the Credentials Committee more specific guidance on “good standing as a cooperating church” when it comes to effectively preventing and handling claims of abuse. Biblical expectations are already present and agreed upon in Article XV of the Baptist Faith and Message 2000. This approach would allow action much sooner and more flexibly than a constitutional change.

The Board agreed. The quicker alternative will be presented to messengers in November. The full report is posted on IBSA.org.

The Board approved a proposed 2023 budget and Cooperative Program ratio to be presented to messengers. The budget sets a CP goal of $6 million and maintains a CP ratio of 56.5% for use in Illinois and 43.5% to be forwarded to the national SBC, excluding shared expenses not to exceed 10% of the CP goal. CP monies received beyond the budget goal would be distributed at a ratio of 50-50. The percentage that Illinois currently sends to the national SBC for missions is 13th highest among 41 state conventions.

Board members re-elected Jeff Logsdon of Wilmington to serve as Board Chair and Bruce Kirk of Bolingbrook as Vice Chair. Current Board Secretary Terry Foster rotated off the Board with Paul Cooper of Marshall elected to take his place. Members rotating off the Board were Jeanette Cloyd, Bob Dickerson, Terry Foster, Don Hannel, Luke Henry, Mike Jameson, John Mancha, and Darryl Williams. Nominees to replace them will be presented at the Annual Meeting, Nov. 2-3, at Metro Community Church in Edwardsville.