One week after newspapers revealed hundreds of cases of sexual abuse by Southern Baptist ministers and volunteers, Southern Baptist Convention President J.D. Greear said churches that have turned a blind eye to abuse have no place in the denomination.

“We must take bold and decisive steps to send an unequivocal message: Churches that have a wanton disregard for sexual abuse and for caring for the survivors are not in good fellowship with this convention,” said Greear, pastor of The Summit Church in Raleigh-Durham, during a Feb. 18 address before the SBC Executive Committee.

Greear’s speech was scheduled prior to a multi-part report by the Houston Chronicle and San Antonio Express-News detailing sexual abuse perpetuated by Southern Baptist ministers, staff, and volunteers over the past 20 years. The newspapers found around 380 SBC leaders have been credibly accused of sex crimes since 1998, and about 220 of those were convicted or received deferred prosecutions in plea deals.

Meeting the day after Greear’s address, the Executive Committee recommended the SBC’s bylaws be changed to define a cooperating church as one that “has not been determined by the Executive Committee to have evidenced indifference in addressing sexual abuse that targets minors and other vulnerable persons and in caring for persons who have suffered because of sexual abuse.”

Indifference, Baptist Press reported, could be evidenced by several circumstances according to the amendment, including employing a convicted sex offender or willfully disregarding compliance with mandatory reporting laws. In order for the amendment to pass, messengers must approve it by a two-thirds majority at the 2019 and 2020 SBC annual meetings.

During his report in Nashville, Greear named 10 Southern Baptist churches mentioned in the papers’ investigation and asked the Executive Committee’s bylaws workgroup to determine whether the churches meet the standards of having a faith and practice which closely identifies with the SBC’s adopted statement of faith as outlined in the SBC Constitution. The workgroup responded Feb. 23, reporting three of the churches warrant further inquiry, six do not, and one is not a Southern Baptist congregation.

The group said their next step is to send letters of inquiry to the churches where additional inquiry is warranted.

The group’s February meeting was different, Carty said. There was a sense of uneasiness in the room, and an urgency. “Let’s get going so we can get things moving,” she said, describing the atmosphere. “We’ve got to make it right.”

In their first plenary session, the committee heard the initial recommendations of a study group tasked with advising Greear on sexual abuse and misconduct in the denomination. He appointed the group shortly after his election last summer, as the SBC struggled to respond to several high-profile allegations of abuse and alleged cover-ups, and as the American culture was considering similar allegations against well-known figures as part of the #metoo movement.

During his report to the Executive Committee, Greear called for a season of prayer, lament, and repentance, echoing what he told Baptist newspaper editors just days after the Chronicle report was published.

“I do not believe you can in any way push this aside as an agenda-driven thing put out by the secular media to try to destroy us,” Greear said of the investigation. Now is not the time for sermonizing, virtue-signaling, or posturing, he said, but a time to recognize the problem and demonstrate humility.

“The safety of victims is more important than the reputation of Southern Baptists,” Greear said. 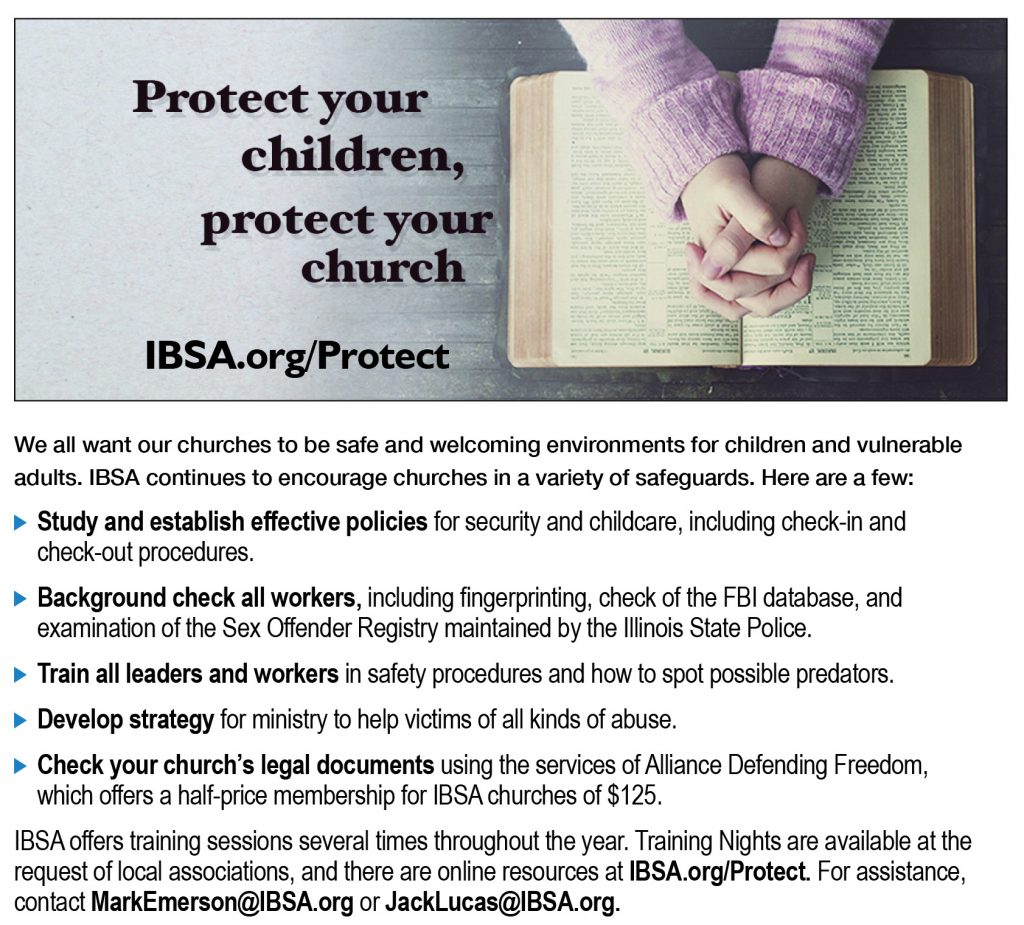 IBSA Executive Director Nate Adams said he is grateful Baptist leaders have responded with grief, repentance, and resolve to battle the evil of sexual abuse. “Even in contexts where the reported offenses have been relatively few,” Adams said, “the attitude has been that even one offense is too many, and that churches must be continually trained and equipped to safeguard their members and guests, and especially vulnerable children.”

All 41 Baptist state conventions were also asked to commit to a Statement of Principles on Abuse, affirming their care for abuse survivors, and how they will equip and support leaders and churches as they engage the issue of abuse. The SBC’s six seminaries and the Southern Baptist Conference of Associational Leaders signed on to similar statements.

“Churches of all sizes, but especially small churches, rely on their state conventions and local associations to provide training and resources in areas ranging from teacher training to tax preparation,” Adams said. “Safety is now emerging as a new, acutely needed category of training, that can include hiring practices, background checks, volunteer training, facilities security, reporting processes, victim recovery and care, and more.

“Clearly we need to look for ways to invest more in training, and to use technology to make resources more readily available to all churches,” Adams said.

Training churches to respond to abuse and care for survivors was a key theme of Greear’s report, one that Adams said will find a receptive audience among Baptist leaders.

“Pastors and leaders must be serious, sacrificial shepherds who guard their flocks, just as Jesus described himself. I believe these recent reports of abuse are serving to heighten the awareness and resolve of church leaders, and that good shepherds everywhere are now declaring a new level of warfare on wolves.”

‘Ongoing vigilance’
Carty said it was clear from the Executive Committee’s meeting that the convention’s response to sexual abuse is “a work in progress.” Greear himself has reiterated that the Sexual Abuse Presidential Study Group isn’t a task force, because their task “will require constant learning, continual introspection, and ongoing vigilance.” The group of pastors, counselors, and victims’ advocates includes Rachael Denhollander, an attorney who was the first woman to accuse former Michigan State University and USA Gymnastics doctor Larry Nassar of sexual assault.

One question they’re evaluating is an old issue that resurfaced following the newspapers’ investigation: Should the SBC have a database of offenders so that those who abuse are less readily able to move from church to church?

The database could be a solution to a question raised by media reports and by Greear’s study group: How could offenders move from one SBC church to another without the accusations of offense, or in some cases their convictions and prison time, being reported to or known by the next church?

The Chronicle report specifically mentioned the charges against Mason, and the case’s connection to the Illinois Baptist. Then-editor Michael Leathers told the Chronicle his decision to publish the charges against Mason angered some readers and Baptist leaders, including then-interim Executive Director Glenn Akins. Leathers said he resigned after IBSA leaders told him he might be fired and lose his severance pay.
Adams responded to questions posed by WORLD magazine about Illinois’ part in the Chronicle report.

“This matter took place more than 16 years ago and long precedes my service with IBSA, so I have no first-hand knowledge of what may have been said between these two men (Leathers and Akins),” Adams said. “I can say that our organization takes claims and especially admissions and convictions of sexual abuse very seriously, and continually seeks to train and resource churches on creating safe environments and preventing opportunities for abuse, and also to care for past victims of abuse.”

In 2008, as part of a study on sexual abuse, the SBC Executive Committee declined to pursue development of a database of Southern Baptist offenders. As reasons for their decision, they cited the difficulty of making it an effective resource, and the SBC’s lack of authority to require local churches to report instances of alleged abuse to their local association, state convention, or the national SBC. Baptist churches are still autonomous, making their own decisions.

But autonomy as a governing doctrine has come into question with the Chronicle report’s revelations.

“This somewhat rare action has historically been used in cases of significant theological difference, but I think more and more groups may now use it to separate themselves from churches that show disregard for the evil of abuse in their midst.”

If many SBC leaders on national and state levels agree with Greear’s study group that the possibility of withdrawing fellowship from offending churches is a viable means of requiring compliance, operating a database of offenders, much like the sex offenders registry maintained by the U.S. Department of Justice in partnership with state governments, is another matter.

“The subject of a database is complicated and will take time to evaluate,” Greear said in Nashville, acknowledging that the group is listening to a wide range of survivors, advocates, and experts on the options. He didn’t announce plans for a database during his report, but said the omission “does not mean that we are not doing everything we can to evaluate it as an option.”

“Brothers and sisters, it is time for change,” Greear said. “The world is watching. People are waiting. And God is going to hold us accountable for how we respond to this moment.”