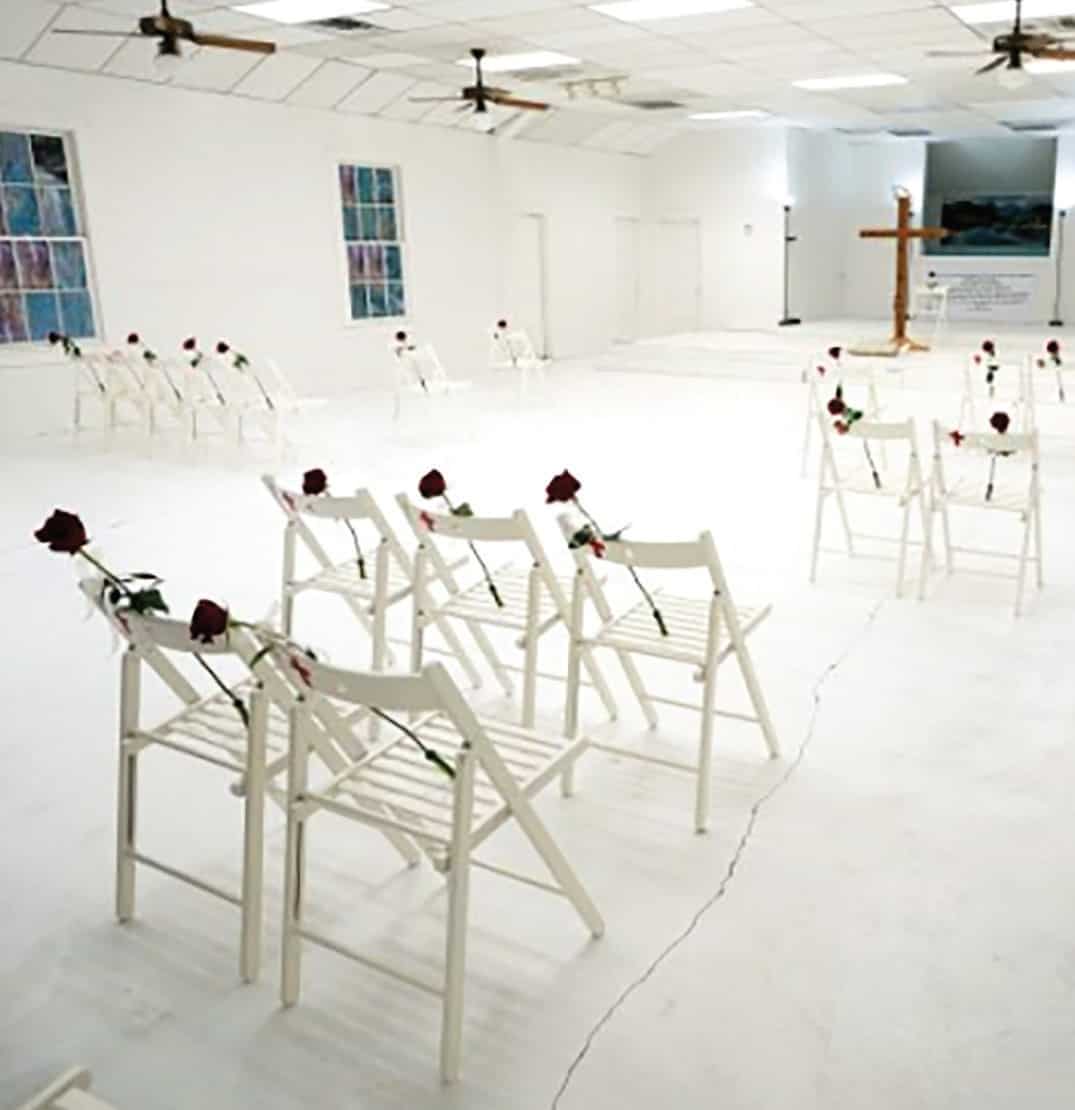 IT HAPPENED HERE – The sanctuary of First Baptist Church in Sutherland Springs, Texas, was reopened Nov. 12 as a memorial to the 26 people killed there the previous Sunday. The shooting has caused many churches to re-evaluate how they handle the issue of church security.

The Nov. 5 massacre at a small Southern Baptist church in Sutherland Springs, Texas, was the deadliest mass shooting at a church in U.S. history. Sadly, though, it wasn’t the first.

It was just two years ago that nine people were killed during a prayer meeting at a South Carolina church. It was less than 20 years ago that a gunman entered Wedgwood Baptist Church in Ft. Worth and killed eight people.

Still, though, many church members can’t believe it could ever happen “here.”

It could. It already has. In March 2009, Pastor Fred Winters was shot and killed while preaching at First Baptist Church, Maryville. Rich Cochran, director of leadership development at IBSA, was serving as minister of education and children at FBC Maryville at the time.

“We ignore reality because we don’t want to face it and don’t know what to do,” Cochran told the Illinois Baptist. But in the aftermath of the shooting at FBC Sutherland Springs, churches around the country are re-evaluating their security plans.

Pastor Dick Sisk commended church security training events but said small churches can take action even as they wait for the next convenient training event. His church, Tarpley Baptist, is, like FBC Sutherland Springs, small, rural and in the San Antonio area. The day after the Sutherland Springs attack, Sisk met with two law enforcement officers in the congregation to hammer out a security plan “that was adapted to our particular situation,” Sisk said.

Tarpley’s plan includes proactive measures to prevent crimes at the church, procedures to employ in the event of an active threat, and protocol to follow after a security threat has passed.

During worship services—which generally are attended by 80-95 people—the congregation always has a marked law enforcement vehicle parked near the parking lot entrance, Sisk said, and the two law enforcement officers in the church are armed and seated strategically in the auditorium. Greeters, workers in the sound booth, and a team of security volunteers also have been assigned security duties.

Pastors should “sit down with people in law enforcement,” Sisk said, “even if they go to another church.”

When asked what advice he would give to pastors and staff thinking about putting a church safety plan together, Cochran said it’s important that pastors and staff mentally and verbally process what they would do were such a thing to happen.

He also noted, “It’s important congregations be extremely friendly, engaging everyone. Then, you can notice when something isn’t right. Then, it doesn’t seem like you have the National Guard in your lobby. The best way is to train people to be nice and to welcome everyone.”

There is a danger in letting fear take hold, he cautioned. “If we pat our heads and build mega-forts around ourselves, we do a disservice to missionaries. If we protect ourselves so much it disrupts our mission, we’re out of whack. There is a constant tension.”

Prayer does play a role. “We need to pray, yes, we need to prepare,” Cochran said, nodding. “Yes, we need to live by faith. We live in a world where evil is present. Even Jesus said there would be troubles.”

In the simplest of terms, Cochran urged, “Prepare, prepare, prepare. Then you have to walk by faith. We’re called to illuminate the darkness.”