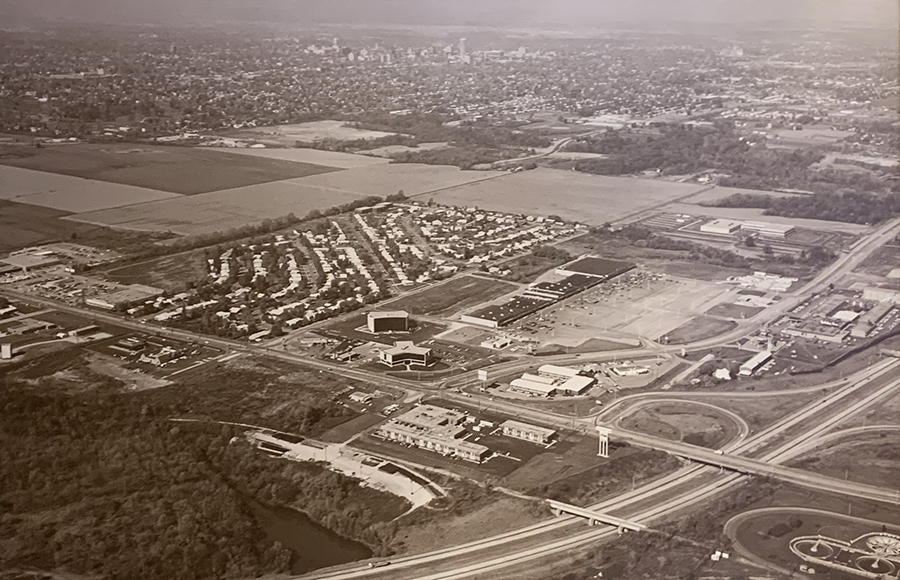 Arial view of the IBSA Building in Springfield, IL circa 1971.

Right after World War Two, as GIs returned to build homes and establish families, Southern Baptists witnessed a terrific wave of growth. Quoting the KJV, “A Great Door and Effectual is Open” was the theme for a post-war IBSA Annual meeting, but as historian Myron Dillow wrote, few realized just how open it would be. The growth in churches and population through the administration of IBSA Executive Director Noel Taylor (1946-1965) caused Illinois Baptists to ask on many occasions if the offices were strategically located. 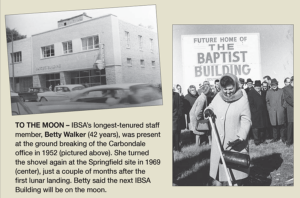 “You had Southern Baptists who moved to northern Illinois to work in industrial manufacturing. They couldn’t find Southern Baptist churches there,” said Janet Crayon, who retired from IBSA in 2000. “It was even true in the Springfield area, where people…went to churches in different, but similar denominations. Most of the staff saw the need to move closer to where the population was.”

Placing IBSA’s ministries closer to vast and unchurched populations became a topic in many annual meetings. Motions to relocate to a central location were brought several times—and failed. Mt.Vernon, Decatur, Bloomington, Champaign, and Peoria were all considered.

With Executive Director James Smith at the helm (1965-1975), messengers at the 1967 Annual Meeting approved a motion to relocate. A year later Springfield was chosen as the city. By 1969 a site was purchased next U.S. 66, as that section of the new I-55 was still called at that time. A contemporary four-story building was envisioned, with a floor for IBSA staff, a floor for business tenants to help cover operating costs, and a Baptist Book Store. (The store was eventually located in Carterville instead.) The projected budget was $1.5 million.

“I remember Dr. Smith saying they had found a wonderful piece of property near the interstate,” Craynon said. “It was next to the Holiday Inn East. He said people wouldn’t even have to drive into Springfield to get to the building.”

A location by the interstate was important.

Before the move “we had board members who had to drive hours and hours to get to meetings,” Craynon said. At the time, the drive could be over eight hours to get to Carbondale from the north. The new location placed IBSA’s offices no more than four hours’ drive from either end of the state, both for staff and leaders attending events.

Craynon was one of many IBSA staff who sold their homes in Carbondale and relocated to Springfield by November 1971. She assisted the Executive Director at the time, and handled bookkeeping, data processing, and facilities during her career. Her mother, Helen Williams, also made the move, serving as WMU associate until Evelyn Tully joined IBSA from national WMU.

The relocation took 25 years, as Illinois Baptist editor Robert Hastings reckoned it, to build support for a bold move of 160 miles. The concern was losing support from the strong base of churches. “The move signals no less interest in Southern Illinois,” he wrote at the time of the building dedication. “It merely signals interest in every nook and cranny of this great state.”