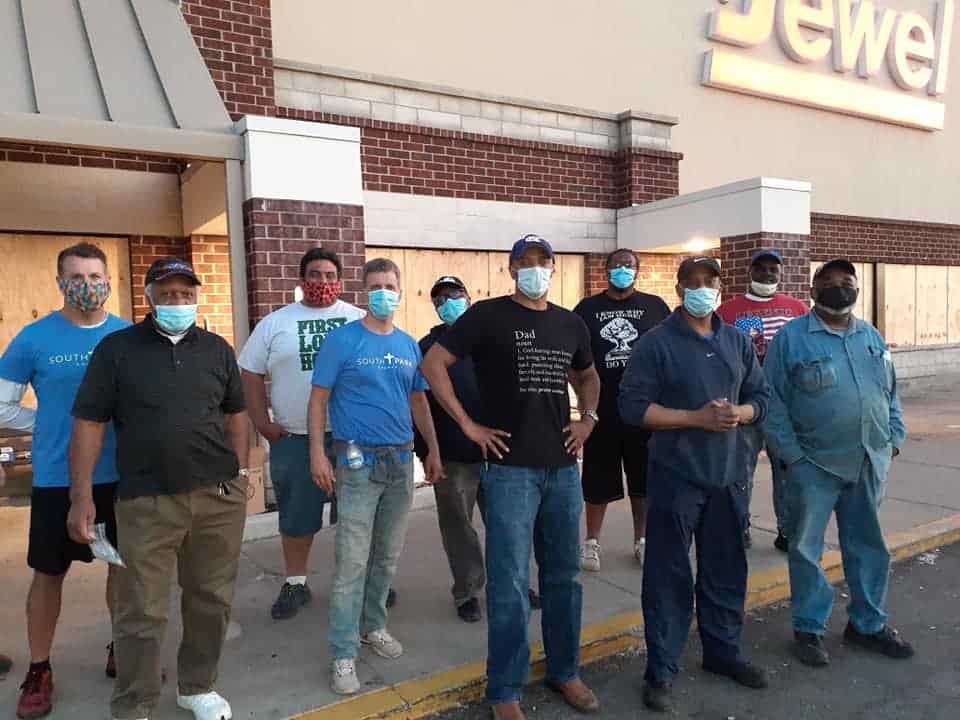 After a weekend of unrest in his city, Ron Gray stood on Monday morning with a group of fellow pastors in front of the only grocery store in their neighborhood. The Jewel Osco had survived the worst of the looting, with some groceries stolen and the windows broken out. The local pastors were there to support police officers and make sure the store didn’t see any further damage.

“Everything where I am in general is devastated,” said Gray, who pastors Connection Community Church in Calumet Heights on the city’s southeast side. “Most businesses were either looted or damaged in some way.” The unrest, which followed mass protests sparked by the death of George Floyd, swept across the country, affecting large cities and many smaller communities. In Illinois, some cities set curfews to try to curb the violence.

Floyd, an African American, died May 25 in Minneapolis after a white police officer knelt on his neck for more than eight minutes. The officer, Derek Chauvin, was fired, along with three others. Chauvin has been charged with third-degree murder and second-degree manslaughter.

Some of the ensuing protests have been peaceful, like a “solidarity procession” that drew 3,000 cars in Springfield. Leading national headlines, though, was what Gray called “self-destructive, passion-filled opportunism fueled by  powerlessness and hopelessness.”

Across the country, city leaders have questioned who is actually leading the violence, with many noting that outsiders seem to be more responsible than residents. Nevertheless, Gray said the grief and anger over Floyd’s death and systemic injustice has resulted in quickfire reactions, and left neighborhoods devastated.

“Because of these emotion-led outbursts, there is going to be less where there was little,” he said. “These short-term reactions will have a long-term effect in our community.”

“I understand the frustration, I understand the disappointment, I understand the agonizing pain of seeing someone brutalized,” Brooks said on Fox & Friends June 2. “I also understand that we have the right to protest according to the First Amendment. But at no time should we ever start looting and rioting and tearing up property, and dismantling possessions that people own.”

Brooks said Project HOOD is attempting to share love and peace in Chicago, and point people to better alternatives. “We have to take a stand and say this is not going to work in our neighborhood.”

North of Chicago, church planter Ray Choi is helping his young congregation process what’s happening nearby, while also leading a church that is largely remote due to the COVID-19 pandemic.

Choi leads Gracepoint Church in Evanston, a congregation focused on Northwestern University and campus ministry. Most of his church attenders aren’t on campus due to the pandemic, but Choi said three students who are Chicago natives sent urgent text messages over the weekend, asking for prayer.

They’ve been praying, Choi said, and also held an online Bible study to help students process current events in a biblical way and recognize that vengeance is the Lord’s (Romans 12:19).

That education component is something that has been lacking, Gray said. “These young people are running around like sheep without a shepherd,” he said. “You should not be surprised they act lost, because they are lost.”

There’s a whole generation on which the gospel has not had an impact, Gray said. They’re angry, and they don’t have the mechanics or maturity to channel that emotion well. And in large part, he said, the church isn’t seen as an ally.