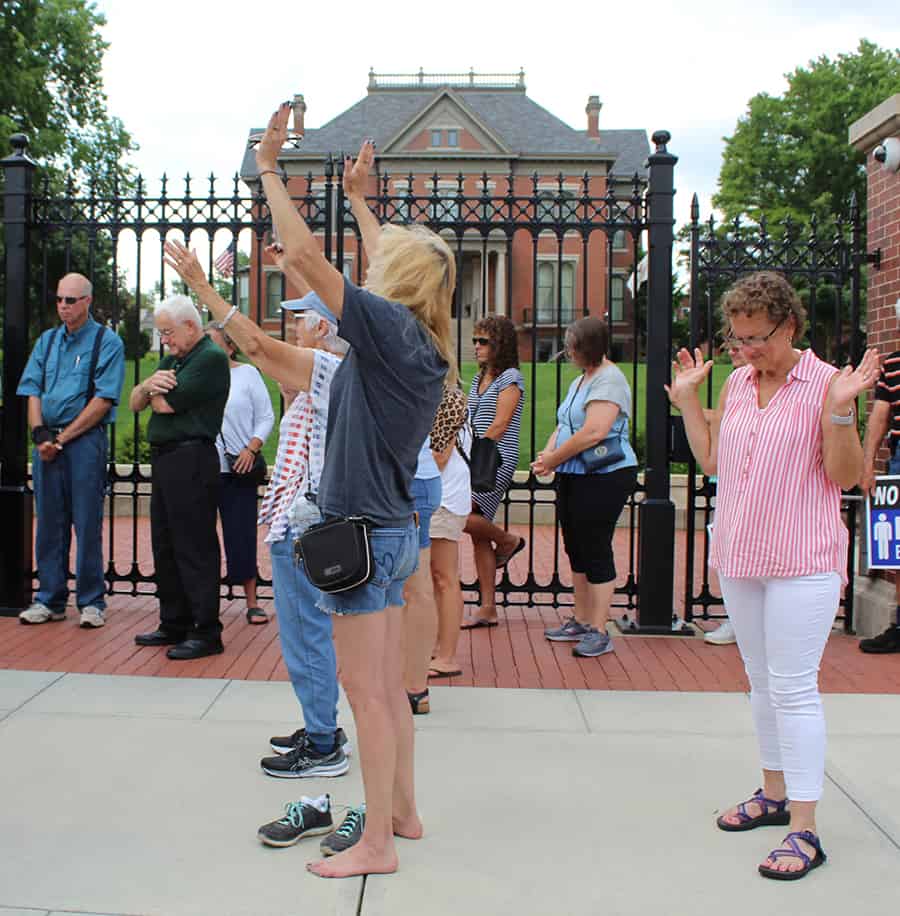 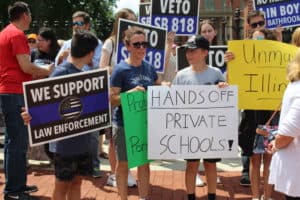 Concerned Christians hold signs in front of the gates to the Illinois Governor’s Mansion at the Jericho Prayer March July 1 in Springfield, IL.

In the Bible, Joshua and the Israelites marched around the walls of Jericho once a day for six days. On the seventh day, they marched around the city’s walls seven times before letting out a great shout. Then the walls fell. In Springfield, a few hundred concerned Christians turned out July 1 for their own Jericho march, this time around the Illinois governor’s mansion to urge Governor Pritzker to veto two bills affecting children in public schools. Passed in May, SB 818, is a sex education bill with controversial curriculum, and HB 156, mandates public schools place feminine hygiene products in boys’ bathrooms.

The Jericho Prayer March, sponsored by the Illinois Family Institute (IFI), began with a prayer led by IFI President David E. Smith. He prayed the governor would veto the bills which he described as “antithetical to the values of the Bible and most parents” in Illinois. Participants shared his view voicing similar prayers as they marched expressing concern for their children and grandchildren, and students in Illinois.

Smith described the curriculum as “not age appropriate, medically accurate, or culturally appropriate.” He shared it teaches children how to have sex including to experiment sexually on themselves and others. Smith asked God for “forgiveness for what we’re teaching our children.”

While the bill allows schools to opt out of teaching sex education, the only sex education curriculum public schools would be allowed to teach is the one approved by National Sex Education Standards by the Future of Sex Education, a non-governmental organization. The curriculum includes a book, which some state legislators have described as “pornographic,” is titled, “It’s Perfectly Normal: Changing Bodies, Growing Up, Sex, Gender, and Sexual Health.” Originally published in 1994, it has been banned in some schools and libraries, and features cartoon drawings depicting nude people in sexual positions.

Others object to SB 818 because they feel the information would be better shared at home in private by parents, not by teachers in a classroom setting surrounded by other students.

HB 156 requires public schools to provide free feminine hygiene products in both girls’ and boys’ bathrooms for students in grades 4 through 12.

Gay Lynne Ledley brought a shofar made from a ram’s horn, she blew before the march began just as the priests did before Joshua and his men began their march around Jericho.

Ledley, a director at Choices Pregnancy & Health in Casey, IL, said it was important to her to attend to take a stand for her grandchildren, particularly a grandson attending public school. She shared her concerns about the curriculum. “I don’t want my grandson to go to school to learn what they’re going to teach him,” she said.

Tanya Miller, a resident of the Marion area, came with church members to the march. She said she feels “burdened for our kids and their future. My grandfather always told me you have to stand firm. And, we have to stand in front of God and answer for what we do.”

It’s not just Christians who are concerned about SB 818. Smith told participants, “We’re here today because we love our neighbors… This bill violates the conscience of faithful orthodox Jews, Christians and Muslims.”

He lamented the bill takes away rights from “local school districts who should have control of what to teach according to values of those communities.”

“We appeal to heaven and ask you to intervene,” Smith prayed.