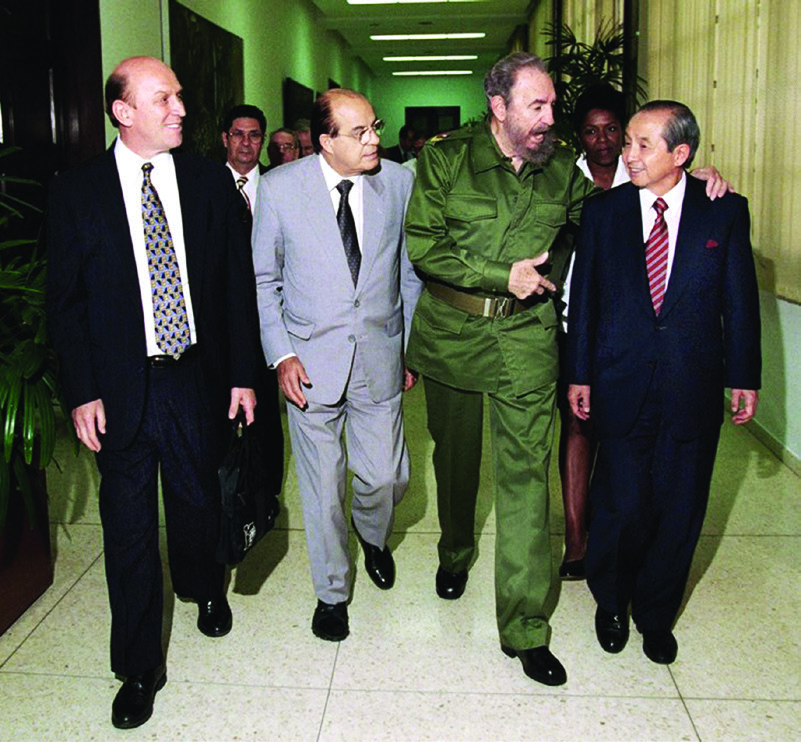 STRAINED RELATIONSHIP – Cuban President Fidel Castro’s government was notorious for its suppression of religion, but the leader met with Baptist World Alliance leaders in Havana in 2000. BP photo

Havana | Cuban dictator Fidel Castro, who died Nov. 25 at age 90, is being remembered as both an unwitting catalyst of revival and an opponent of religious liberty.

Castro’s death, said Southern Baptists with ties to Cuba, is unlikely to yield significant increases in religious liberty for the island nation until the fall of the communist government he inaugurated 57 years ago.

When Castro led a revolt that overthrew then-Cuban dictator Fulgencio Batista in 1959, he instituted a communist regime that viewed Christians as “anti-revolutionaries.” And he barred them from attending universities or entering certain professional fields, according to the persecution watchdog group World Watch Monitor. But the global decline of communism in the early 1990s yielded decreased oppression of believers in Cuba.

Castro’s government was “really hard on the churches during the ‘60s, ‘70s and ‘80s,” said Cesar Perez, a Cuban-born American who directs Hispanic ministries at First Baptist Church in Richmond, Ky. “Then because of the economic situation” when the Soviet Union fell and could no longer support Cuba, Castro “just let the churches go a little bit.”

Cuba’s communist party “is still in control,” Perez told Baptist Press, but the easing of restrictions “helped the churches.”

The more moderate pressure on churches continued after Castro ceded power to his brother Raul in 2008. Last month, for instance, a Cuban court sentenced the pastor of a 550-member house church to a year of house arrest for holding loud worship services, according to Morning Star News, a news service focusing on Christian persecution worldwide.

Among ongoing restrictions, construction of church buildings requires government permission, Perez said, as do large gatherings. Yet those restrictions have driven Cuban believers to launch a house church movement that has spurred “a revival for the whole island” for the past 20 years.

In late 2014, U.S. President Barack Obama announced the United States would restore its diplomatic relationship with Cuba. Following that announcement, Lakeland Baptist Church Pastor Phil Nelson spoke to the Illinois Baptist about his extensive missions experience in Cuba. The Cuban Christians he worked with on multiple trips, Nelson said, are “passionate about the gospel, unashamed about anything. They had a boldness that we just don’t know anything about here in the United States.”

Mark Warnock was associate pastor at First Baptist Church in Columbia, for 11 years and Hillcrest in Country Club Hills for five years prior to that. On a mission trip to Cuba, he saw how the political system prevented people from flourishing, he told the IB.

“Their cities were crumbling and their living conditions were meager,” Warnock said. “At the same time, under those conditions, the Cuban Christians were thriving and multiplying with a vigor I’d never seen in the U.S.

“Part of me hopes that political relations between the U.S. and Cuba will continue to warm, so that we can resource the Cuban church and fuel the gospel movement there, and so the Cuban people can have some relief from the long economic slump of socialism. At the same time, I fear what consumerism and materialism might do to blunt their spiritual fervor, and I honestly think that the American church needs to learn from the Cuban church more than they need resourcing from us.”

In the post-Fidel Castro era, a Florida Baptist Convention leader who has been coordinating missions in Cuba for 18 years says Baptists will continue to be salt and light among their neighbors in the Caribbean, though they expect little immediate change in the Cuban government.

“Things aren’t going to change a whole lot [in Cuba] until the last name [of its leaders] changes,” Craig Culbreth, the Florida Baptist Convention’s lead catalyst for misisons and ministries, told BP. “And it’s still Castro. I think there will be some changes. How fast or how many I don’t know.”

In the meantime, Florida Baptists plan to continue sending an average of one mission team to Cuba every eight days, Culbreth said.

In a Facebook post he wrote, “What truly moves those of us who lived the communist experience in and outside of Cuba is the hope of a better future.”

– From Baptist Press, with additional reporting

by the Illinois Baptist