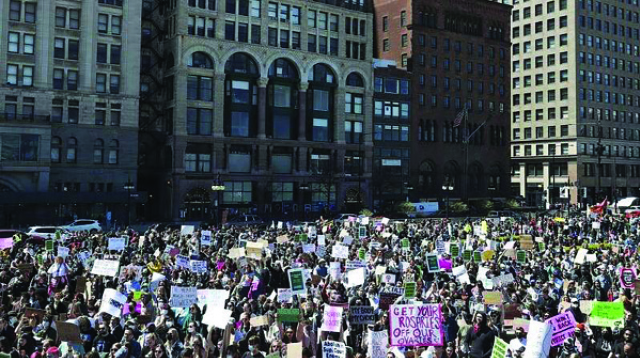 Abortion advocates staged demonstrations in major U.S. cities including Chicago on May 14, 2022.

Abortion is a difficult subject to discuss with a friend or family member who is pro-choice, when as a pro-life Christian you perceive that choice as ending the life of another. Here are a few strategies for having a productive conversation:

Pray. Ask God to give you wisdom as you speak. Jesus said we are to love our neighbor as we love ourselves (Matt. 22:39).

Stay calm. Fear and anger often surround discussion that includes abortion. As Christians we know God does not bring fear (2 Timothy 1:7). Don’t allow yourself to be swept into those feelings. Meet strong emotions with love. You may not change anyone’s mind, but you may clear up some misconceptions.

Be tactful. One Lifeway study found 4-in-10 women were regular church attenders when they had abortion. Just 7% felt comfortable enough speaking with anyone in the church about it at the time. Many women are still dealing with the emotional and even physical effects years later. Once, a woman tearfully confessed to our Sunday school class she’d had an abortion as a teen. She still carried that hurt and grief with her.

Remember the men. Abortion is a woman’s issue, but it’s more than a woman’s issue. Another Lifeway Research study found half of men whose partners had an abortion were church attenders when it took place. Have consideration for their feelings as well.

Stay on topic. If someone tries to divert the discussion, tell them they have a good point and you’re willing to discuss it later, but continue as you were. The issue isn’t if the Court will next overturn the Obergefell v. Hodges decision on same-sex marriage as some contend. Justice Alito stated in the leaked Dobbs opinion that no other cases were included in the reasoning behind the purported decision.

Emphasize all life is important. Pro-choice people often express the belief that the “other side” only cares about abortion and nothing about the child who is abandoned or neglected. If you’re pro-life then you care about all life—from newborns to the elderly. That means helping women and children in need whether it be through crisis pregnancy centers, adoption, food ministries, or other outreach. It also means caring for the elderly or those with health issues.

Our society thrives on keeping people afraid of what is going to happen next. But we can’t witness based on fearful speculation.

For all the branding and sloganeering, love does win. The love of Christ.

Recently I had the privilege of seeing two of my nephews baptized. Similar to our own three sons, brothers Joe and Elijah received Jesus as their Savior at different times, but then were ready to be baptized on the same day. The church their family attends is fairly large, and its current building was once […]