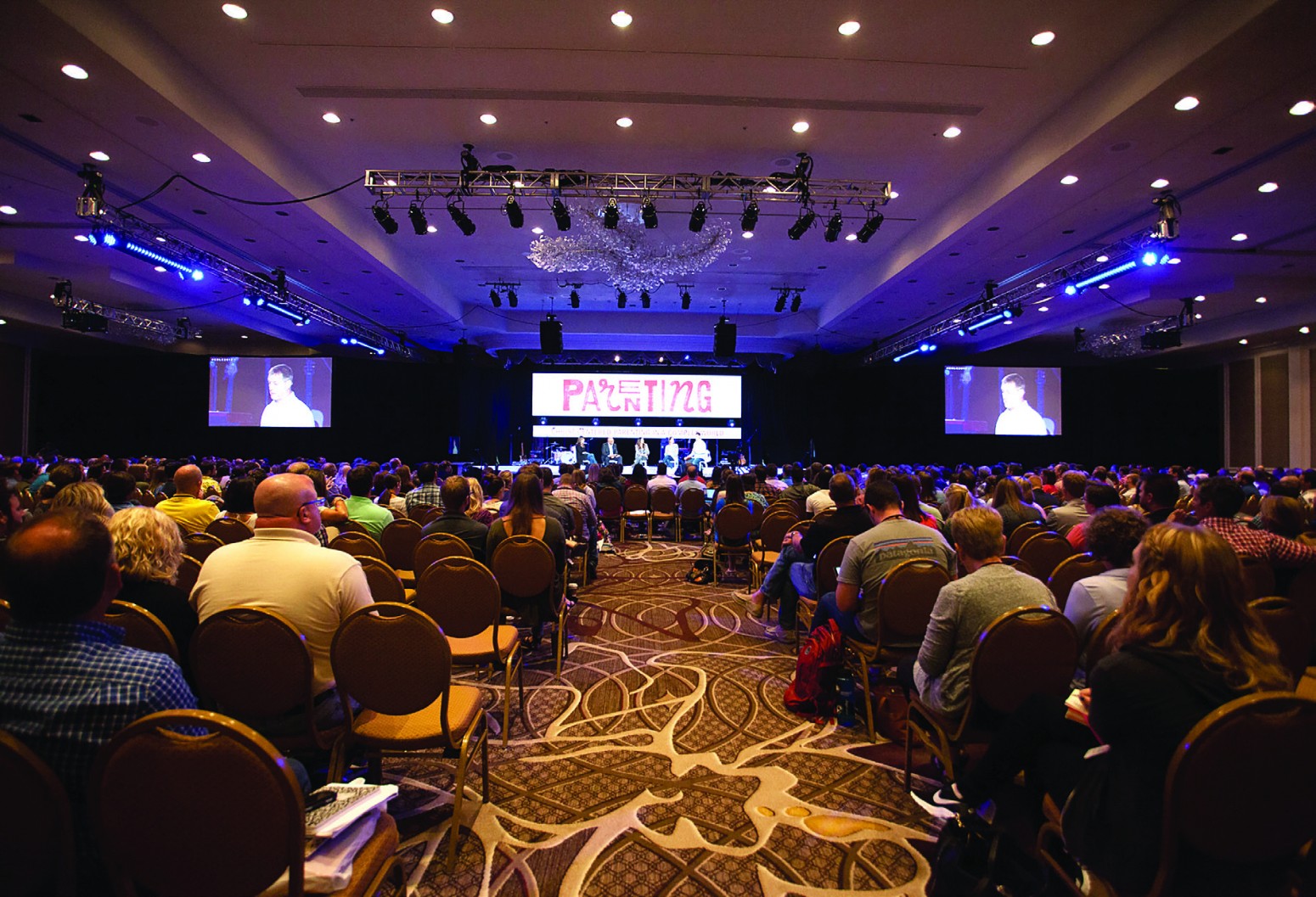 FOR ALL AGES – Strollers and babies in laps were common at the ERLC’s conference Aug. 24-26, where families were encouraged toward a Christ-centered view of parenting.

The word “family” conjures up feelings of warmth, sentimentality, peace, and tranquility—the kinds of things we put on Christmas cards, said Russell Moore, president of the Ethics and Religious Liberty Commission.

Often, though, our families aren’t really like that. We’re not lying, Moore said, but there are so many things we leave unsaid. Those things—the challenges of parenting, the hard conversations, the fears that children won’t turn out like we want them to—were at the heart of the ERLC’s conference on “Christ-Centered Parenting in a Complex World.”

The podium at the Aug. 24-26 meeting was filled by family experts, church leaders, storytellers, and even a U.S. Senator (Ben Sasse of Nebraska). But the audience looked a lot like real parents. Strollers lined the walls of the auditorium as parents and children listened together. One speaker in a breakout for moms tweeted that it was highly appropriate to hear several crying babies in the session.

Over three days at Nashville’s Opryland Hotel, conference speakers drew on their experiences ministering and equipping families—and raising their own—to guide parents toward a gospel-centered view of the family. Along the way, they touched on some specific issues of our day—gender identity, racial division, sexuality, pornography, and the overwhelming influence of technology.

They also called Christian parents to an ideal that grows more and more radical as the culture around them changes. “Those who grow to know and serve God with everything they have do not blend in,” said author and speaker Jen Wilkin. “The goal of a Christian parent is to prepare their child to live in a world that is not their home.”

At the meeting, several characteristics of gospel-centered families emerged. Three of those are overviewed in this issue of the Illinois Baptist and will be discussed in more detail in an upcoming series on parenting: (1) Gospel-centered families are willing to be counter-cultural; (2) They’re built in the context of a community of Christ-followers, the local church; and (3) They’re based on the principle that children can be actively engaged right now in the mission of Christ.

In his opening address, Moore said the unspoken challenges of parenting are part of the reason it can be so difficult. “…In our culture, parenting so often is about winning and displaying.” If something goes wrong in our family, he continued, we worry people are going to think something’s wrong with us. He quoted a friend who said he knew parenting would be humbling, but had no idea it would also be humiliating.

The antidote to drowning in all the potential failures? A Christ-centered perspective, one that acknowledges parents are called to follow Christ’s example and take up a cross, Moore said.

It’s easy to blame kids for peer pressure—for exerting it on one another and for feeling it themselves. But it’s generally not children who fall victim to it, said Jen Wilkin. It’s parents who feel a strong pull to soothe their own memories of not fitting in by helping their kids fit in.

But Christian parents need to be looking instead for opportunities to help their children get comfortable with being different—even “alien” in our culture, Wilkin said. She gave five areas where Christian families and kids will look different, beginning with their activities.

“We have to be running these things through a different filter than other people,” she said. A filter that places a higher priority on the dynamic at home than allowing children to run themselves—and their parents—into the ground with an ever-increasing list of activities.

She read Deuteronomy 6:6-7: “And these words that I command you today shall be on your heart. You shall teach them diligently to your children, and shall talk of them when you sit in your house, and when you walk by the way, and when you lie down, and when you rise.”

Jim Kerr is pastor of First Baptist Church in Fairview Heights. Wilkin’s talk on family activities resonated with him because he sees families in his church struggling to balance all the things they think they have to do. Churches can fall victim to the same kind of thinking, he said.

“The guilt of doing ministry sometimes overrides the benefit of the right amount of ministry and the right amount of time,” Kerr said. “Because we just wear ourselves out.” That’s why his church plans intentional seasons of break in certain activities and ministries, he said, “realizing that there’s so much going with our families and our children, we’re going to wear ourselves out from doing, while not really gaining the purposes we need.”

Wilkin talked about four other areas in which Christian families should be alien and strange: speech, possessions, entertainment, and friends. Look for more on counter-cultural families and how parents in Illinois are raising “alien” children in upcoming issues of the Illinois Baptist.

The role of the church

At least two speakers in Nashville quoted a study that found children are more likely to stick to their faith after high school if they’ve been invested in by adults other than their parents. Christ-centered parenting can’t be done in a vacuum. It calls parents to rely on others in their faith community, Russell Moore said. Christians are to bear one another’s burdens, including in parenting, he said.

“That is what is so dangerous about the church turning, in many cases, into silos filled with individual minivans full of families, coming to receive instruction and then to return home to their self-contained units.” Even more so in our rootless, hyper-mobile culture, Moore said, where children don’t see their extended families often and mothers and fathers fight feelings of isolation, parenting can be a lonely endeavor.

“We need each other, and we cannot be godly parents to our children if we are not brothers and sisters to each other.”

Moore recalled a woman who approached him after he preached at her church and leaned close to whisper a prayer request for her daughter, who was away at college and had decided she was an atheist. When Moore asked why she was whispering, she said, “I don’t want anybody to think, ‘There’s that lady with the atheist daughter.’”

Something’s terribly wrong with that picture, Moore said. “Here we are when every family in Scripture has prodigals, including God the Father. And we are scared to cry out to one another and say, ‘I feel like in my parenting I am drowning and I need help.’ That is what the church is for.”

If parenting in community means bearing one another’s burdens, it also involves having the courage to turn children loose to engage in God’s mission. In fact, that should be the goal of parenting, said North Carolina pastor J.D. Greear. Children are designed by God to be arrows, Greear said, referencing Psalm 127, not accessories.

Quoting family ministry expert Reggie Joiner, Greear said in our safety-obsessed culture, we forget the ultimate goal of parenting is to let go.

“The ultimate mission of the family is not to protect your children from all harm, but to mobilize them for the mission of God,” said Greear, pastor of The Summit Church in Raleigh-Durham.

And as they go, they’re sure to look different, having been shaped in a community in which the goal of the family is to glorify God and, through their example, to bring others to a saving knowledge of Christ.

“As Christian parents, the most hopeful thing we can do is lift up our own eyes and train the eyes of our children to behold our Savior, alien and strange,” Wilkin said. “He is coming on the clouds, and when he comes, may he find the family of God, and your family and my family, desperately hoping and yearning to look like him.”