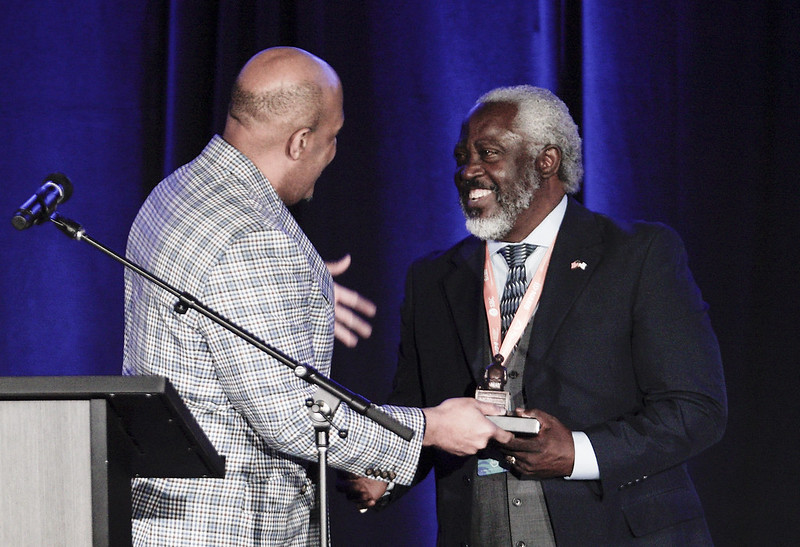 Rolland Slade, right, outgoing chairman of the SBC Executive Committee, is thanked by Willie McLaurin, interim president and CEO of the EC, during a meeting June 13 in Anaheim. Slade completed a two-year term as chair. Photo by Adam Covington

Rolland Slade smiled broadly as he was handed a crystal gavel marking the end of his tenure as chairman of the SBC Executive Committee. The EC, currently comprised of 68 members, met June 13 in Anaheim and online, one-day before the SBC’s Annual Meeting, to elect new officers make budget adjustments prior to its presentation. After a meeting two weeks earlier to add funding for sexual abuse response, the EC rescinded two recommendations which would have asked messengers increase to the EC’s budget dollars to fund the sexual abuse response. The extra funds were no longer needed because they will now be offered from another source.

Slade has chaired the group through a period he called “chaotic” at one point, that included pandemic-related lockdown and more importantly the investigation into the EC’s handling of sex abuse claims within the denomination and the resignation of EC CEO Ronnie Floyd and 17 trustees last fall.

A California pastor, Slade seemed genuinely relieved that his eight years as an EC trustee, including two as chair, were coming to a close. He will be officially off the panel at Wednesday’s conclusion of the convention. He was also given a small statue of Jesus washing the disciples’ feet, a present to all EC members who are rotating off this year.

The pre-convention meeting was a bit of an opportunity for members to catch their breath after another challenging month. Among the recommendations the SBC Sexual Abuse Task Force (SATF) requested after submitting its report was that a minimum of $3 million be contributed to sexual abuse reforms with the EC serving as stewards of those funds. Another $1 million would be used to “further assess, establish, develop and implement a comprehensive framework” for the SBC to improve its response to abuse allegations and legal matters. After the Committee approved the reallocation of dollars at its June 2 meeting, some expressed concern the move could affect funding of missions.

On June 8, the North American Mission Board’s Send Relief announced it would give $3 million to fund the proposed SATF recommendations along with an additional $1 million to setup a survivor care fund to provide trauma care for survivors and trauma training for pastors. Thus, negating the need for the EC to budget monies for those expenses.

Illinois Baptist Pastor Adron Robinson, Country Hills, Hillcrest, was elected to serve as chair of the Committee on Convention Relations.