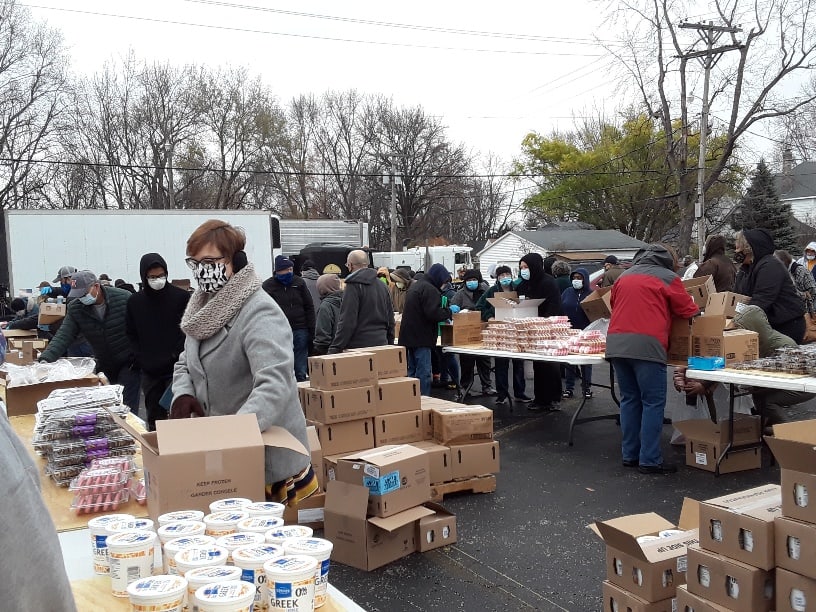 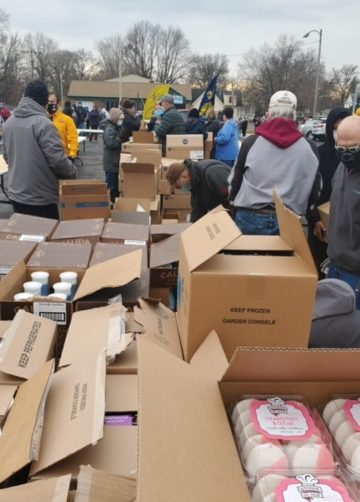 Editor’s note: This story was updated Feb. 2 with additional information and statistics from 2020.

Across Illinois | Just as the semi-truck full of food pulled into the parking lot at Second Baptist Church, the skies opened up, said Pastor Chris Sedabres. Even as the rain poured down, people came to the church to receive free groceries and supplies. And many of them stayed to help, he said.

“We had a lot of people from the neighborhood come to get food, but a lot of them stayed to help and unload the trucks,” Sedabres said. “To see the people come out and stand in the rain and help us, it was unbelievable. It was nothing short of a miracle of God.”

His church was one of six central and southern IBSA congregations that participated in massive food distributions just before Thanksgiving. In Springfield (pictured above), around 1,000 people were served at Springfield Southern Baptist Church, where volunteers and others gave away 40,000 pounds of food. The food, donated by the Dot Foods company, was delivered by Illinois Baptist Disaster Relief (IBDR).

The distributions were part of a 2020-specific strategy employed by volunteers to keep on serving, despite an unusual and challenging year. State coordinator Butch Porter has worked with the Federal Emergency Management Agency (FEMA), ministry partners, and companies like Dot Foods to procure needed items to distribute for free across the state.

In the final two months of 2020 alone, IBDR distributed more than $1.5 million in food, PPE (personal protective equipment), and other supplies. “That’s just awesome,” Porter reported in December, as even more supplies were en route. By the middle of the month, Disaster Relief had received 21 semi-trailer loads to distribute across Illinois.

Along with various agencies and ministries, DR also received help from a Mt. Vernon refrigeration company that loaned the ministry a walk-in cooler. Two warehouses have been donated to store supplies. And Porter and IBDR leaders are still working to distribute more.

“It’s kind of like the fish and loaves,” said Sharon Carty, a Disaster Relief leader and volunteer from Emmanuel Baptist in Carlinville. “God just kept making it multiply.”

The Thanksgiving food giveaway included items not always provided through food pantries and other distribution sites, including milk, yogurt, and cookies. Another three semi-loads went to Proviso Missionary Baptist Church in Chicago to be distributed in the city. DR also prepared 96 pallets of personal protective equipment (PPE) and distributed them across Illinois.

In Carlinville, Peggy Brown was working at Emmanuel Baptist Church as volunteers began to prepare for the food distribution there. The administrative assistant is a trained Disaster Relief volunteer, but the distribution at her church was her first callout.

In Illinois, Carty said volunteers have also stepped up to transport items where they’re needed. In a season where normal activities are on pause, she said, DR has found another avenue to serve. “People have just stepped up and said, ‘Hey, we can do that.’”