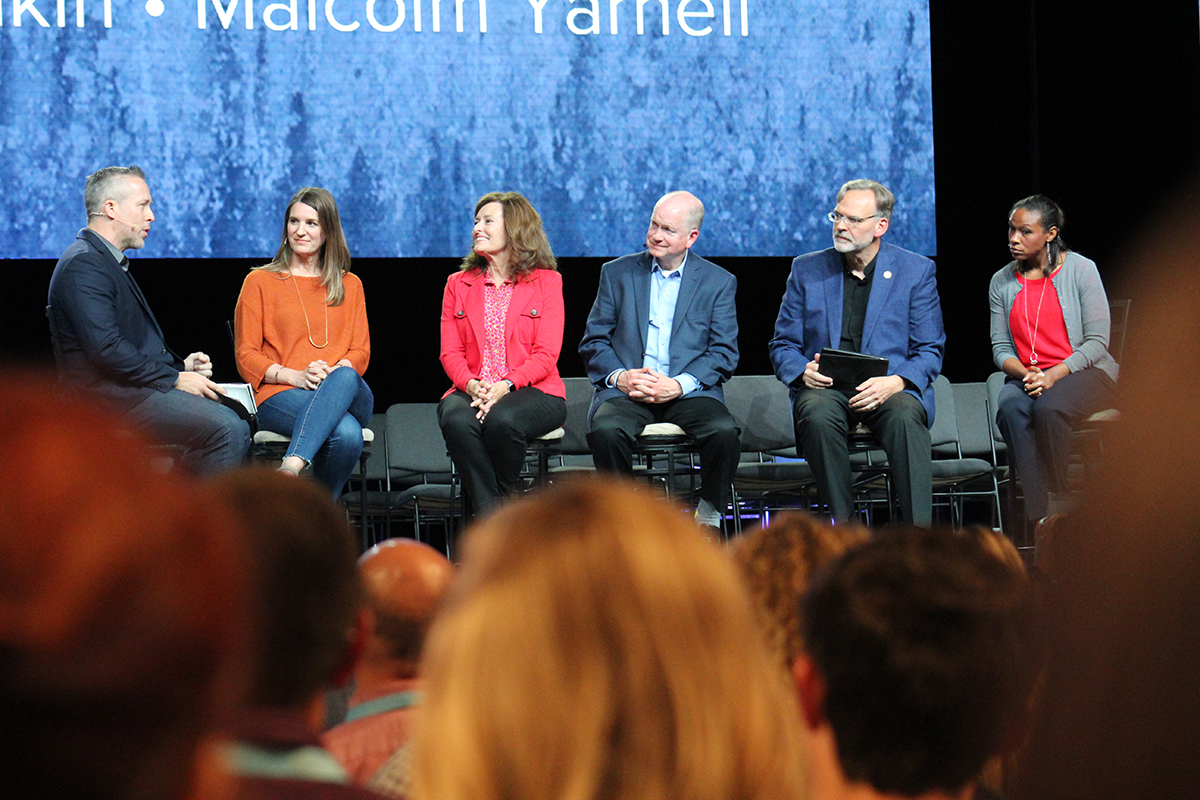 A panel discussion near the end of the SBC’s annual meeting in Birmingham might have flown under the radar because of its place on the schedule. But not its subject matter.

The Wednesday afternoon conversation on “Indispensable partners: The value of women in God’s mission” brought together women and men to discuss the doctrine of complementarianism, its role in the SBC, and a way forward that honors God and serves the church. Panelists also touched on a topic that inspired heated conversation recently online: Is it appropriate for a woman to preach during a Sunday morning worship service?

The discussion came toward the end of a convention that saw women take on new roles in SBC life (see column at left). Continuing a trend from the last several years, there were more gatherings focused specifically on leadership development for women, including the launch of the SBC Women’s Leadership Network.

On Wednesday afternoon, J.D. Greear opened the conversation by asking the panelists to define complementarianism, and whether there’s room for disagreement within the SBC on the much-debated doctrine. Southeastern Seminary President Danny Akin said basic complementarianism affirms that men and women equally bear the image of God, and God has established distinctive assignments for both.

]Regarding the preaching debate, Malcolm Yarnell, professor of systematic theology at Southwestern Seminary, noted two distinct groups within the SBC, both well respected, he said. One group would say the office of pastor is limited to men, as affirmed by The Baptist Faith and Message (2000). This group, Yarnell said, would go beyond the Southern Baptist statement of faith to say the function of pastor is also limited to men, and that only qualified men should teach in the church.

The other group, Yarnell said, would say a woman can address a church in a teaching role, but not in an authoritative or doctrine-defining teaching role.

Even within that disagreement and others, there is a better way to talk about differences than how we often do, panelists said. When Greear asked about their biggest concerns regarding complementarianism, author and Bible teacher Jen Wilkin cited the tone of the conversation. It should be one we have as brothers and sisters, said the director of classes and curriculum at The Village Church in Texas.

“This is a theology we can use with the primary goal of building fences or building tables,” Wilkin said, quoting a trusted pastor. Families gather around tables, she noted. The panel offered several ways church leaders can help their congregations navigate the conversation about gender roles.

First, make sure there are women in the church visible enough for people to know to go to them for counsel and wisdom. In the book of Romans, Wilkin said, Paul mentions 11 women by name. Her prayer for SBC churches, she said, would be that they too would have women Paul would know by name for their faithfulness and leadership.

And third, involve them in sermon preparation. Greear said a group of women at his church receive an early draft of his message so they can advise him during the writing process.

Remember how Scripture describes your relationships with one another, the panelists urged church members. “My hope would be that we would function as the family of God,” Wilkin said, “even as we discuss these differences that we have.”