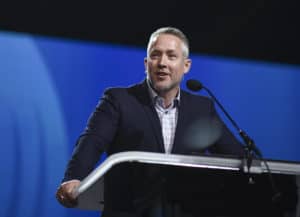 J.D. Greear’s unexpected three-year presidency was marked by significant challenges, including reports of sexual abuse in the SBC and tensions over race within the convention. Greear spoke about those issues in his final sermon to the Convention, but he was also able to point to some accomplishments. He charged that messengers not drop the ball as he passed the gavel to incoming president Ed Litton, and he repeatedly urged the record crowd to be “Great Commission Baptists.” It was more than a theme for Greear; it was a clear declaration of identity.

Greear tapped the meeting open with a gavel made from pioneering missionary Adoniram Judson’s bedpost. Greear and others advocated retiring the Broadus gavel, used since 1872,  after reports that Baptist forebear John A. Broadus was a slave holder. The change marked several memorable moves by Greear.

Messengers stood and applauded when Greear addressed racial tension within the SBC. “To our pastors of color, many of whom think we don’t care about you: We need you…(prolonged applause). I need you. We can’t reach our nation without you. We cannot be who God has called us to be without your leadership.”

More than half of Greear’s appointments to 2020-21 committees are non-Anglo, as is 37% of the Committee on Nominations elected by messengers at the 2019 SBC Annual Meeting. Overall, the SBC averaged 12.4% ethnic diversity per trustee board for 2020-21, according to the Executive Committee. Individual boards range from a low of 3.9% ethnic diversity to a high of 21.65%.

“There has been an increase in upper-level” ethnic participation, said California pastor and EC chairman Rolland Slade, who is African American. “Doors have just been opened.”

“I made diversity a goal not because it’s cool, ‘woke,’ or trendy,” Greear said. “The largest growth we’ve seen in the SBC has been among Black, Latino, and Asian congregations…. Last year 60% of our new church plants were either ethnic churches, multiethnic churches, or non-Anglo churches.”

More than 10,000 of 48,000 SBC churches are ethnic congregations, he said. “If we’re going to reach a changing society, our leadership needs to reflect that.”

Greear addressed politics in his farewell message. “Whenever the church gets in bed with politics, the church gets pregnant, and the offspring does not look like our Father in heaven,” Greear quipped. “God has not called us primarily to save America politically; he has called us to make the gospel known to all.

“We are not the party of the elephant or the donkey, we are the people of the lamb.”

Greear continued pushing the concept Great Commission Baptists. Referencing the SBC’s Conservative Resurgence in the 1970s and 80s, Greear said, “Our defining moment is about whether we will let the gospel that our forefathers preserved for us define the identity and determine the mission of our Convention.

“Gospel maturity means knowing which things should divide and which should not.”