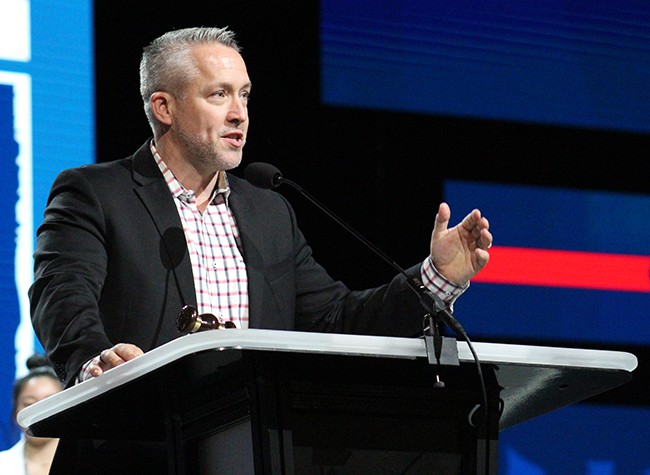 Saying they faced the “most important crossroads” in a generation, departing SBC President J.D. Greear challenged Southern Baptists to hear the concerns of the entire body while unifying around the one true gospel and the Great Commission. Greear addressed the issues that dominated discussion ahead of the convention, but pointed to the centrality of the gospel.

During the Conservative Resurgence of the 1970s and 80s, Greear said, God raised up a generation that called the SBC to hold true to the authority of the Bible. “Their courage God used to save our future.” That was their defining moment, he said.

“Our defining moment,” Greear said, “is about whether we will let the gospel that our forefathers preserved for us define the identity and determine the mission of our Convention.”

In his final sermon as president of the denomination, Greear joked that he was looking forward to his new office, “past president.” Because of Covid limitations that prevented meeting in 2020, Greear served three years that included the sex abuse allegations within the SBC, debate over Critical Race Theory and its impact on race relations within the denomination, and Covid itself.

Greear approached the message with zeal and some humor, and clarity over serious issues. The last year “revealed fault lines in our convention. Covid did not create them, it just brought them to the surface.”

Greear urged clear repudiation of racism and sexual abuse while avoiding phariseeism. “I’m not saying that anyone who disagrees with me on something is a Pharisee. No, for sure, I see some of these qualities present in me also,” Greear said. But he challenged Southern Baptists to search their own hearts, drawing several ovations.

Messengers stood and applauded when Greear addressed racial tension within the SBC. “To our pastors of color, many of whom think we don’t care about you: We need you…(applause). I need you. We can’t reach our nation without you. We cannot be who God has called us to be without your leadership.”

Greear pointed to divergent views on social justice. “Justice is a major theme in our Bibles, and so of course Satan, the angel of light, is going to produce counterfeits for it, and on this we need to ensure that we are more shaped by the Scriptures than we are by the world.”

Most Southern Baptist laity and leaders – both Black and white – consider CRT at odds with the gospel, Greear said, but he encouraged Southern Baptists to clarify and strengthen their position on the theory while listening to Blacks among the congregation.

“We should heed the counsel of our leaders of color who tell us that our denunciations of justice movements fall on deaf ears when we remain silent on the suffering of our neighbors,” he said. “And we must make certain that our zeal to clarify what we think about CRT is accompanied by a pledge to fight with [Black Southern Baptists] against all forms of discrimination against our neighbors; to make clear that we stand with our brothers and sisters of color in their suffering, lamenting the pain of their past and pledging to work tirelessly for justice in our present.”

Things that divide, unite
Greear pointed to politics as a dividing element in the SBC today. “Whenever the church gets in bed with politics, the church gets pregnant, and the offspring does not look like our Father in heaven,” Greear quipped.

“We have to decide if we want our convention primarily to be a political voting bloc or if we want it to be a Great Commission people, because the rules of engagement for each are different.…I recognize that the blessings that God has bestowed on our country should never for one second be taken for granted.

“But…God has not called us primarily to save America politically; he has called us to make the gospel known to all.”

With his frequent use of the term, Greear pushed “Great Commission Baptists” as their identity and purpose. “Gospel maturity means knowing which things should divide and which should not.

“We are not the party of the elephant or the donkey, we are the people of the lamb.”

-With reporting from Baptist Press