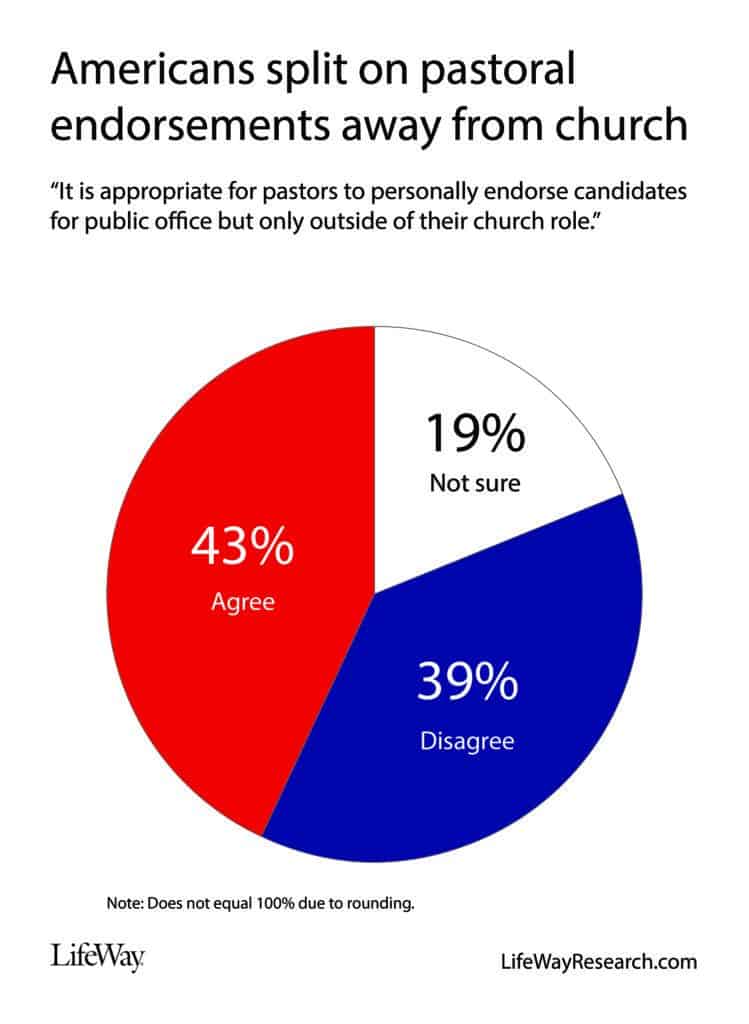 Few pastors make political endorsements from the pulpit, but a growing number publicly back candidates when they step away from their church role.

Among U.S. Protestant pastors, 1% say they have publicly endorsed a candidate for public office during a church service this year, while 98% have not, according to a new study from Nashville-based LifeWay Research. Those numbers are unchanged from a 2016 LifeWay Research study.

Around a third of pastors (32%), however, say they have personally endorsed political candidates this year outside of their church role. That marks a 10-point jump from 2016 when 22% of Protestant pastors made an endorsement.

While the percentage of pastors endorsing politicians has increased in the last four years, most still avoid publicly backing specific candidates, even apart from their role in church. In 2020, 65% say they have not endorsed a politician. Three-quarters (77%) said the same in 2016.

“Pastors are more decided on who they are voting for in 2020, so it’s not surprising that more pastors have shared their opinions with others personally,” said Scott McConnell executive director of LifeWay Research. “The candidates endorsed by pastors may be local, state or national. But those who do so in an official church capacity are a rare exception.”

While the endorsements could have been for a candidate of any political office, pastors who say they are voting for Donald Trump are more likely to say they have made a political endorsement outside of church (45%).

Pastors voting for Joe Biden (34%) and those undecided (10%) are less likely to have personally endorsed a politician away from their church role.

In one area of political activism, Biden-voting pastors are more likely to participate—registering voters.

Around a quarter of Protestant pastors (26%) say their church has worked to get people registered to vote in this year’s election. Pastors voting for Biden are more likely to say they have done this than pastors voting for Trump (34% to 22%).

American views on church and pastor endorsements
Few want churches making official political endorsements or pastors doing so during a church service, but Americans are split on the appropriateness of pastors endorsing a candidate outside of their congregational duties.

Around 3 in 10 American adults (29%) say they are fine with churches making public endorsements of politicians. More than half (57%) are opposed.

Close to half (45%) believe churches that publicly endorse candidates for public office should lose their tax exemption. Three in 10 (32%) disagree.

A quarter of Americans (24%) believe it is appropriate for churches to use their resources to campaign for candidates. Almost two-thirds (63%) are opposed.

Support for churches using their resources during campaigns has grown slightly in the past 12 years. In 2008, 13% saw it as appropriate, while 17% did so in 2015, according to two previous LifeWay Research surveys conducted by phone.

“Americans prefer for churches to remain religious sanctuaries rather than political rallies,” said McConnell. “While church support for politicians is seen as improper by most, Americans are less supportive of legal ramifications for such acts.”

One in 4 American adults (24%) believe it is appropriate for a pastor to publicly endorse candidates for public office during a church service. Six in 10 (61%) disagree, with 47% saying they strongly disagree.

Yet opposition to pastoral endorsements during services has steadily declined since 2008. Twelve years ago, 86% expressed opposition, while 79% did so in 2015, according to the previous LifeWay Research studies.

The public is more divided over the appropriateness of pastors endorsing politicians away from their church role.

More than 2 in 5 Americans (43%) see no problems with pastoral endorsements as long as they are outside their church role, while slightly fewer (39%) say such a move is inappropriate. One in 5 (19%) aren’t sure.

“It may be hard for some Americans to ever see a pastor as being outside of their church role,” said McConnell. “While every American is entitled to their political opinion, some people struggle to separate such personal comments from a pastor’s religious office. Opposition to politically inclined pastors is not surprising considering 24% of Americans say all Christians should be silent on politics.”

Americans with evangelical beliefs and those who regularly attend church tend to be among those more supportive of mixing church and politics.

When asked about churches endorsing candidates, those with evangelical beliefs are more likely to be supportive (41%) than those without such beliefs (26%). Catholics (36%) are also more likely to allow church endorsements than Protestants (29%) and those who are religiously unaffiliated (19%).

Christians who attend a church worship service once a month or more are also more likely to see such endorsements as appropriate (38%) than all other Americans (24%).

Regular Christian churchgoers and those with evangelical beliefs are also more likely than their counterparts to see nothing wrong with pastors endorsing a candidate during a church service, pastors making an endorsement outside their church role, and churches using their resources to campaign for candidates.

African Americans are more likely to believe it is appropriate for churches to publicly endorse candidates (38%) than whites (28%) or other ethnicities (24%).

Party divides
As with pastors supporting the president’s reelection, Americans voting for Trump are more likely than others to see nothing wrong with pastoral and church involvement in political races. The same is true for Republicans compared to Democrats.

Two in 5 Trump voters (39%) believe churches who publicly endorse candidates are acting appropriately, compared to 27% of those planning to vote for Biden and 18% of undecided voters.

Half of Americans voting for Trump (52%) see no problem with pastors endorsing candidates away from the church. Two in 5 Biden voters (40%) and 36% of undecided voters agree.

Meanwhile, those supporting Biden are more likely to believe churches who publicly endorse candidates should lose their tax-exempt status (58%) than Trump voters (39%) or undecided voters (32%).

“When it comes to churches and clergy, the political activities that most concern Americans are also the least practiced,” said McConnell. “But there is not complete agreement across different groups about what is right.”

Aaron Earls is a writer for LifeWay Christian Resources.