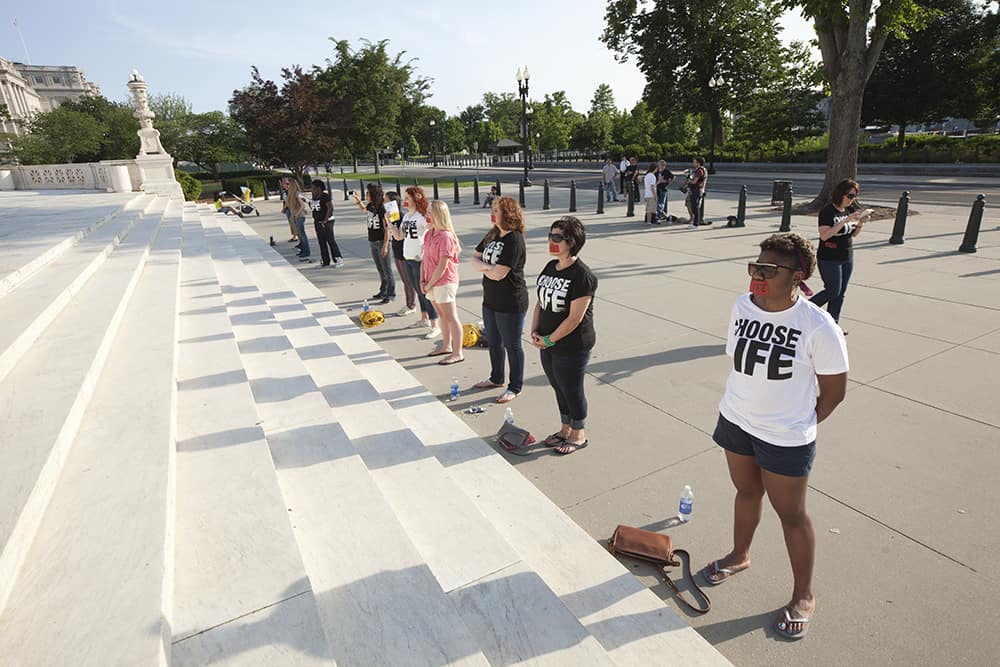 (Undated photo) Pro-life advocates in front of the Supreme Court building in Washington DC, with mouths taped to symbolize the inablility of an unborn baby to speak for itself.

Supreme Court Chief Justice John Roberts was the swing vote once again in a 5-4 decision that struck down a Louisiana law requiring doctors and others who perform abortions to have admitting privileges at a hospital within a 30-mile radius.

The majority of the Court found the law to be unconstitutional by placing an undue burden on a woman’s right to choose, in making it more difficult for her to obtain an abortion. Roberts was joined in his finding by Justices Stephen Breyer, Ruth Bader Ginsburg, Elena Kagan, and Anthony Kennedy on June 29.

Pro-life advocates had hoped the Louisiana law would be upheld, providing a crack in the wall that other rulings have erected around the Court’s 1972 ruling in Roe v. Wade.

Breyer wrote in the majority opinion, “We have examined the extensive record carefully and conclude that it supports the District Court’s findings of fact. Those findings mirror those made in Whole Woman’s Health in every relevant respect and require the same result. We consequently hold that the Louisiana statute is unconstitutional.”

The case Beyer referenced is a Texas case, Whole Woman’s Health v. Hellerstedt, brought before the Court in 2016. Breyer references it again in his opinion calling it “almost word-for-word identical” to the current case, June Medical Services LLC v. Russo. Legal scholars have pointed out Roberts voted that case to be constitutional, the  opposite of what he voted in this ruling.

The majority agreed with the district court’s ruling, that hospital admitting privileges provided no significant health benefit. Breyer concluded “conditions on admitting privileges common to hospitals throughout the State have made and will continue to make it impossible for abortion providers to obtain conforming privileges for reasons that have nothing to do with the State’s asserted interests in promoting women’s health and safety.”

Justices Samuel Alito, Neil Gorsuch, Brett Kavanaugh, and Clarence Thomas opposed the ruling. Thomas wrote in the dissent, “Today a majority of the Court perpetuates its ill-founded abortion jurisprudence by enjoining a perfectly legitimate state law and doing so without jurisdiction.”

As abortion providers have been promoting the women’s health aspects of their facilities, states with more conservative abortion laws have been looking towards tightening the safety regulations on those same providers in an effort to further protect their health. This has led to the laws in Louisiana and Texas which the Court addressed. The Missouri Department of Health revoked the license of the state’s last Planned Parenthood Clinic over repeated violations over a year ago. The clinic, located in downtown St. Louis, fought the revocation in court, which was overturned in a decision announced June 9. A few weeks later, Missouri Governor Mike Parson announced the state wouldn’t appeal the ruling.

In states, such as Illinois, where abortion laws have been loosened, regulations have followed suit. The Reproductive Health Act changed Illinois law to allow doctors, advanced practice registered nurses, physicians’ assistants, or a person acting under the supervision of one of those to perform surgical abortions, according to Illinois Right to Life. A physician’s prescription is not needed to obtain an abortion pill. The Act also removed all licensing and inspection requirements of abortion clinics.