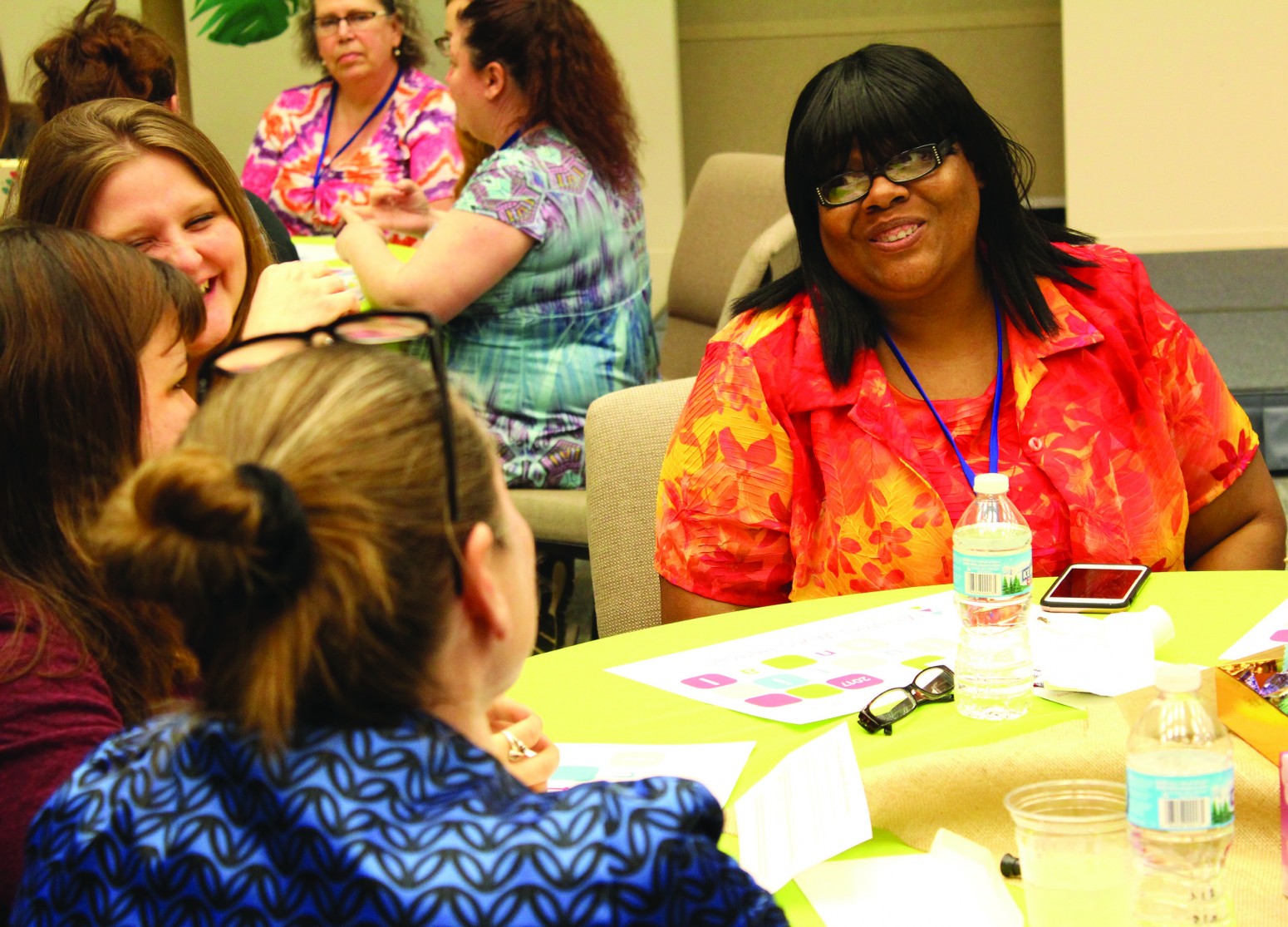 FRIENDS – Mattie Randle (below, right) of Resurrection House Baptist Church in Chicago gets to know other ministry wives during the retreat’s opening session. Photos by Lindsay McDonald and Meredith Flynn

Springfield | At their annual retreat, 75 ministers’ wives from across Illinois studied what it means to operate out of one’s God-given influence, led by a woman who labels herself an “unlikely” minister’s wife.

Diane Nix, founder of the ministry wives network Contagious Joy, spoke on the importance of a woman’s relationship with God as she carries the role of minister’s wife, and warned women about the lies that damage their influence. She also shared personal stories of her life as the wife of Preston Nix, a pastor and now professor at New Orleans Baptist Theological Seminary.

“Diane seemed to connect well by telling multiple stories of her experience being a pastor’s wife,” said Andrea Hammond, a pastor’s wife from Grace Southern Baptist Church in Virden who helped organize the retreat. “She did not want to be a pastor’s wife at first but then felt the call. She has a great story of how God worked in her life.”

1. My identity is rooted and grounded in Christ. Not doing, but being.

2. Everyone is called. Surrender to your specific call as your anchor when hard times come.

3. Your role is specific to you. God created you and made you to be you, not someone else.

4. Without you, your husband will not be able to complete what God has called of him (as it relates to being in fellowship and right standing in your marriage).

5. We are called to serve God, and we serve him by serving other people. Man-pleasing will kill you!

A woman’s spiritual life is foundational to her influence, Nix told the women. “You can only be as influential as your relationship with Christ is strong,” paraphrased IBSA’s Barb Troeger, whose husband is an Illinois Army National Guard chaplain.

The retreat also featured multiple breakout sessions, opportunities for meeting fellow ministry wives, and even a painting class. Artist Libby Morecraft, the wife of Saline Association Director of Missions Rusty Morecraft, led the women to create their own version of a sun-drenched ocean landscape.

“I always hear groans during the painting,” said Morecraft, who has led the painting parties in Illinois churches for outreach, fellowship, and to raise money for missions. “But then everyone turns out their own masterpiece.”

Morecraft said she was encouraged to see so many young, new ministry wives at the retreat. “I really connected with a precious young minister’s wife and we are already e-mailing.” During the retreat’s opening session, women rotated between tables, answering rapid-fire icebreaker questions and getting to know each other.

“It’s always encouraging to reconnect with fellow ministers’ wives that I only get to see once a year,” Morecraft said. “I love these ladies!”

Carmen Halsey, IBSA’s director of women’s ministry and missions, said she heard similar feedback from retreat attenders. One particularly appreciated the time to laugh and talk transparently about their shared experiences. And many wives are following up on upcoming events, Halsey said, including an online study of the book “Strengths-Based Marriage” and a ministers’ wives mission trip to New York City. For more information about these opportunities and others for women, go to IBSA.org/women.