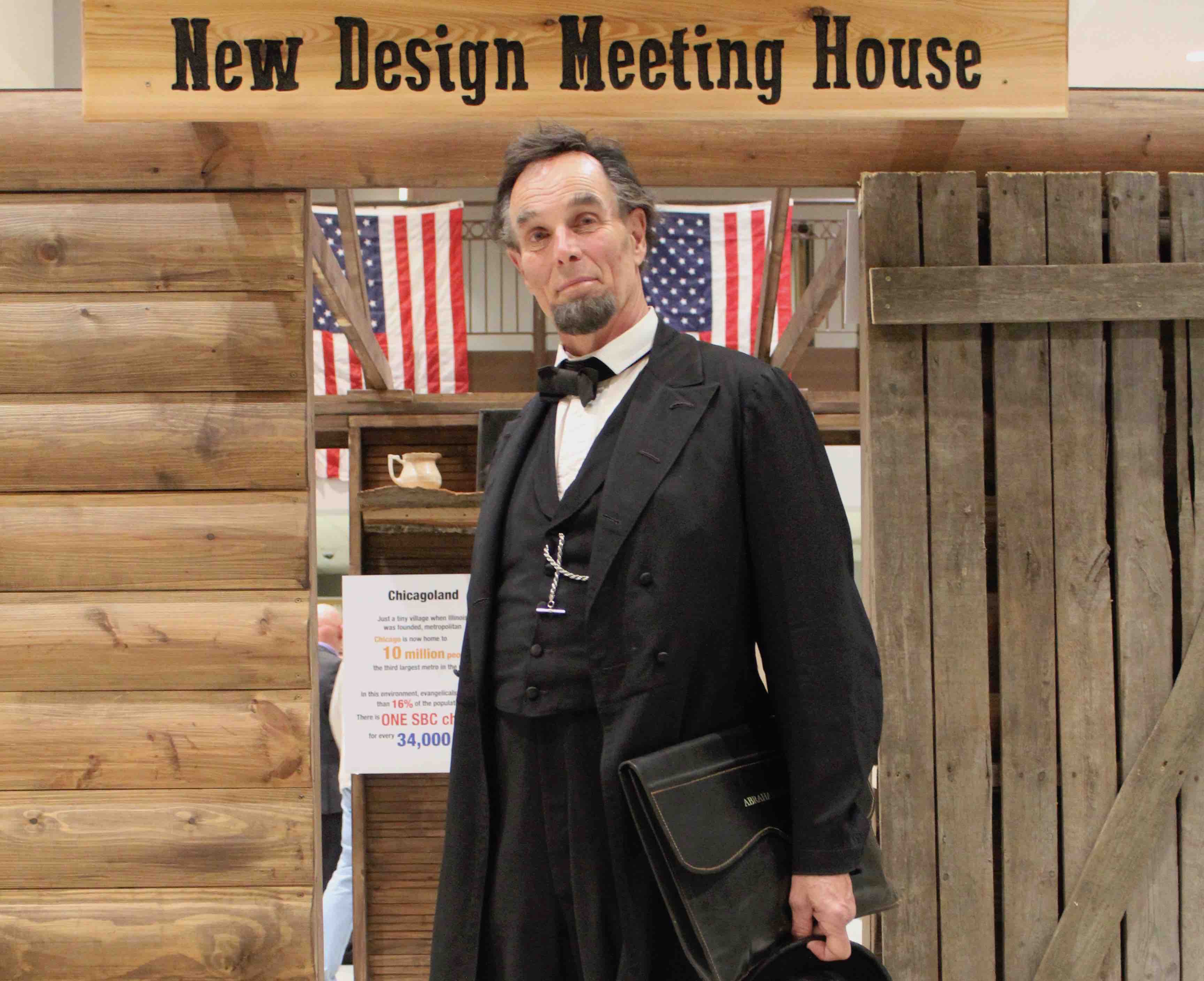 A milestone anniversary for Illinois set the foundation for IBSA’s Annual Meeting Nov. 7-8 at First Baptist Church in Maryville. The state’s bicentennial—and a visit from its most famous resident—highlighted the 112th annual gathering of Southern Baptists in Illinois.

The meeting also focused on four “Pioneering Spirit” challenges churches have embraced over the past year so that the gospel is advanced in a state where more than 8 million people do not know Christ.

Last year, IBSA set a goal for at least 200 churches to embrace one or more of the challenges. At the final tally, 219 churches committed to go new places, engage new people, make new sacrifices, or develop new leaders.

One of those churches, Sugar Camp Baptist near Mt. Vernon, has a big dream. Pastor Jesse Webster and his church want to purchase a large facility in a different part of town and relocate their historic congregation to the new neighborhood. It requires a pioneer’s spirit, one that Webster and his church are embracing as they seek greater effectiveness in sharing the gospel in their community.

When a church pursues that kind of spirit, they often have to make adjustments, said Tom Hufty, pastor of FBC Maryville. Preaching the annual sermon to close the meeting Nov. 8, Hufty used an acrostic to highlight the steps needed to make those adjustments: attitude, decisions, understand, submit, and trust. And in the middle of it all: Jesus.

Weaving family stories into his message, Hufty described how his standard of housekeeping has changed after years of marriage to his wife, Rhonda. His value for her holds him to a higher standard.

“We have someone to value,” Hufty said, closing his message. “His name is Jesus. He’s in the middle of all our adjustments.”

Blazing new trails
Prior to the Annual Meeting, the IBSA Pastors’ Conference gathered church leaders for messages focused on forging new paths in ministry. For leaders, blazing new trails in ministry often means laying aside their own ambitions and resources. It’s a humbling process, said speakers at the conference. But it’s glorious to watch God work through pastors and churches that are committed to his will and his way.

Darryl Gaddy opened the conference by calling leaders to work so that more people can hear and respond to the gospel, even as they navigate difficult circumstances and difficult people. God is in control, said Gaddy, a church planting strategist in South Carolina.

“Oftentimes we as pastors…find ourselves at the precipice of despair because we forget that God has already determined the outcome.” The answer, Gaddy said, is to continue preaching the gospel and trust God to do the work of transforming lives.

Later Pastors’ Conference messages focused on the vital role partnership plays in reaching them. St. Louis pastor Noah Oldham preached on becoming a sending church. Those churches work against the urge to gather and accumulate, said Oldham, pastor of August Gate. Churches that God uses are diverse, unknown, worshipful, hungry, humble, and obedient. They’re like the church at Antioch, which was planted by nameless men who nevertheless established one of the most effective churches in history.

“That church that was launching point for the Gentile mission was planted by nobodies,” Oldham said, asking the audience, “Will you be those people?”

Learn by doing
Mary Mohler spoke Nov. 7 to about 50 women meeting in Maryville for an annual gathering of IBSA ministers’ wives. Mohler, whose husband is president of Southern Baptist Theological Seminary, focused her first session on engaging the privilege of prayer. In the second session, she led ministers’ wives in an extended time of corporate and personal prayer.

Mohler prayed aloud through the book of 2 Timothy, adapting Paul’s words to church leaders into requests for the women’s husbands and families. She also prayed through a section of Colossians, and gave ministers’ wives an easy-to-remember plan to pray through several Psalms: 7, 37, 67, 97, and 127.

Throughout her talk, Mohler, author of the new book “Growing in Gratitude,” shared several resources designed to enhance a person’s prayer life. But, she encouraged ministers’ wives, “The best way to learn to pray is to pray.”

Growing pains, critical moments
“We have arrived at a critical period in our history.”

Abraham Lincoln’s historic words could have been spoken today. And at the meeting in Maryville, they were. Delivered by renowned Lincoln interpreter Fritz Klein, the wisdom of Illinois’ most famous pioneer echoed with new resonance.

That doesn’t mean there won’t be growing pains, Adron Robinson preached in his president’s message Wednesday afternoon. The IBSA president and pastor of Hillcrest Baptist Church in Country Club Hills described the early church’s struggle with division—“growing pains,” he called them.

Acts 15 finds the early church in the middle of a major dispute. Some leaders were teaching that the Old Testament law of circumcision was required for salvation. The line they drew separated Jews from Gentiles, and diluted the new covenant established by Christ’s death on the cross. The leaders were feeling superior, because they had been chosen and used by God. They were the gatekeepers.

These “growing pains” in the early church had to be resolved because of the urgent need to get the gospel to more people, Robinson preached. Growing pains in churches today often result in racism, in division, in one group believing they’re superior over another. Our modern-day growing pains need resolution too, for the sake of the gospel.

“Salvation has never been about race, but it’s always been about grace,” he said. All believers in Jesus Christ has received the same grace—that’s why we should receive one another.

Look for more from the IBSA Annual Meeting and Pastors’ Conference at IllinoisBaptist.org and in the Nov. 19 issue of the Illinois Baptist newspaper.