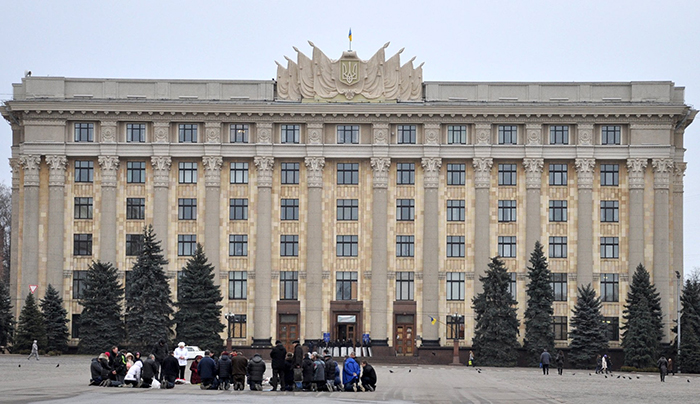 FREEDOM UNDER ATTACK -- IMB missionary Joy* said Christians met for prayer at Freedom Square in Kharkiv in front of the regional state administration building for 2,920 consecutive days, until it was shelled March 1. 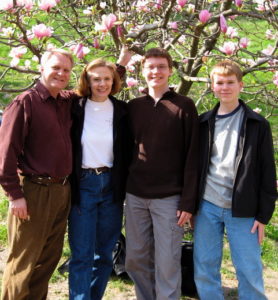 HOME IN UKRAINE – Former IMB missionaries Shannon and Katie Ford, and their sons Cameron and Carson, lived and served in Kyiv 18 years. This photo was taken in 2007. Today the Fords live in Illinois, where Shannon joined the Illinois Baptist State Association as Missions Director on March 1.

Shannon Ford chokes up easily and often as he talks about Ukraine. Ford, his wife, Katie, and their sons Cameron and Carson lived in Kyiv 18 years, while he was catalyzing church plants through the International Mission Board. “Ukraine in many ways is home,” he said. “Our boys grew up there….You see a picture in the news of a place under attack, and you think ‘I know that place, I’ve been there,’” he said.

The Fords concluded their service there in 2016, but friendships with Ukrainian Christians have remained deep and constant. “My phone notifications have been beeping like crazy since the Russian invasion,” Ford said.

“The Baptists in Ukraine are incredibly genuine,” he said. “There is a real sense of unity, of reverence and respect. They don’t tease,” said the missionary, who returned to the United States in March and joined the Illinois Baptist State Association as Missions Director.

Some of the friends he hears from have fled cities that are being bombed, while others have stayed. Most are asking if they have made the right choice.

“There are people who have stayed and are seeking to help anyone they can,” he said. “And there are people who fled led to flee to a place of safety because sheltering in place was not an option. I have written many messages saying, ‘You prayed about it, you sought counsel, and you can have peace about it.’”

Many people are concerned about the opinions of others, especially young men who stayed or returned to fight. Vitaly* is one example. The young father of three was advised by the government to take his family to a place of safety. As in the images filling television screens worldwide, Vitaly and his small children huddled with thousands at the border as he texted Ford. “Be at peace” for taking action, Ford told him.

At one point, Vitaly was stuck in a line of cars 16 miles long, running out of gas and food. People from the region offered to push stalled cars and brought hot donuts and water. And yet, Vitaly felt pressure for his choice to escort his family to safety.

“In IMB life, what we told people in these situations is that no one gets to be a hero because they stayed, or a coward because they left,” Ford said. “What we seek is to be obedient.” 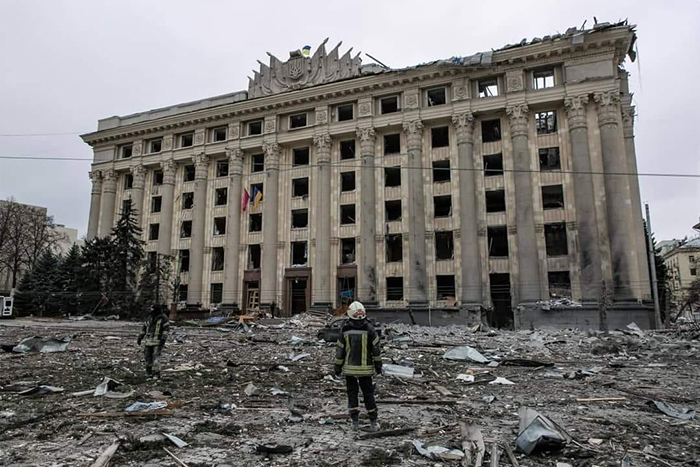 SCENE OF DESTRUCTION – The Kharkiv regional state administration building in Freedom Square after it was bombed March 1.

Yulia* is a woman in her mid-thirties who chose to stay in her western Ukraine town of Lviv. One of the first people who was baptized under the Fords’ ministry, she has since become a strong leader in Baptist work, leading student groups and discipling young adults. Today she is helping refugees inside the country, which Ford calls “internally displaced peoples.”

Yulia welcomed one couple from Kyiv to Lviv, 300 hundred miles away. “They heard there were these people who would help them, give them a place to sleep, give them provisions, and help them move on,” Ford said. “These people” were Baptists, including Yulia. The couple, not believers, insisted repeatedly that they should pay for the assistance. Yulia refused. “The only thing we ask as you leave is that you tell us how we can pray for you,” she told them.

Most people in Ukraine have connections to Orthodox Catholicism with its formal approach to prayer. But the genuine belief of the Baptists was made real, Ford said, when Yulia and the group took their hands to pray for the refugees wellbeing as they left for the Polish border.

The woman promised to keep in touch with Yulia. From Poland she wrote back, “Will you please keep my contact? I want people like you in my life to keep praying for us.”

“The only people who prayed for them on the way were our Ukrainian Baptists,” Ford said. “Who knows how God will use that to lead to their salvations…. So we are thankful.”

Ford said many of the military chaplains posted with Ukrainian troops are from the Baptist churches there. They are endorsed and placed, much like American chaplains service with our military. Ford encouraged prayer for the Baptist chaplains, as they serve in a vital capacity right now.

His own prayer extends to Russian troops as well. “We don’t hate those who are bringing the aggression. We have pity for them, we want them also to know Christ.” There are Russian soldiers who are dying as are Ukrainians. “They are souls, and we are concerned for them.”

Ford urged churches in the United States to support the SBC’s Send Relief, which is working with IMB and Ukrainian Baptists to provide emergency aid for displaced people. Send Relief is operated by the North American Mission Board.