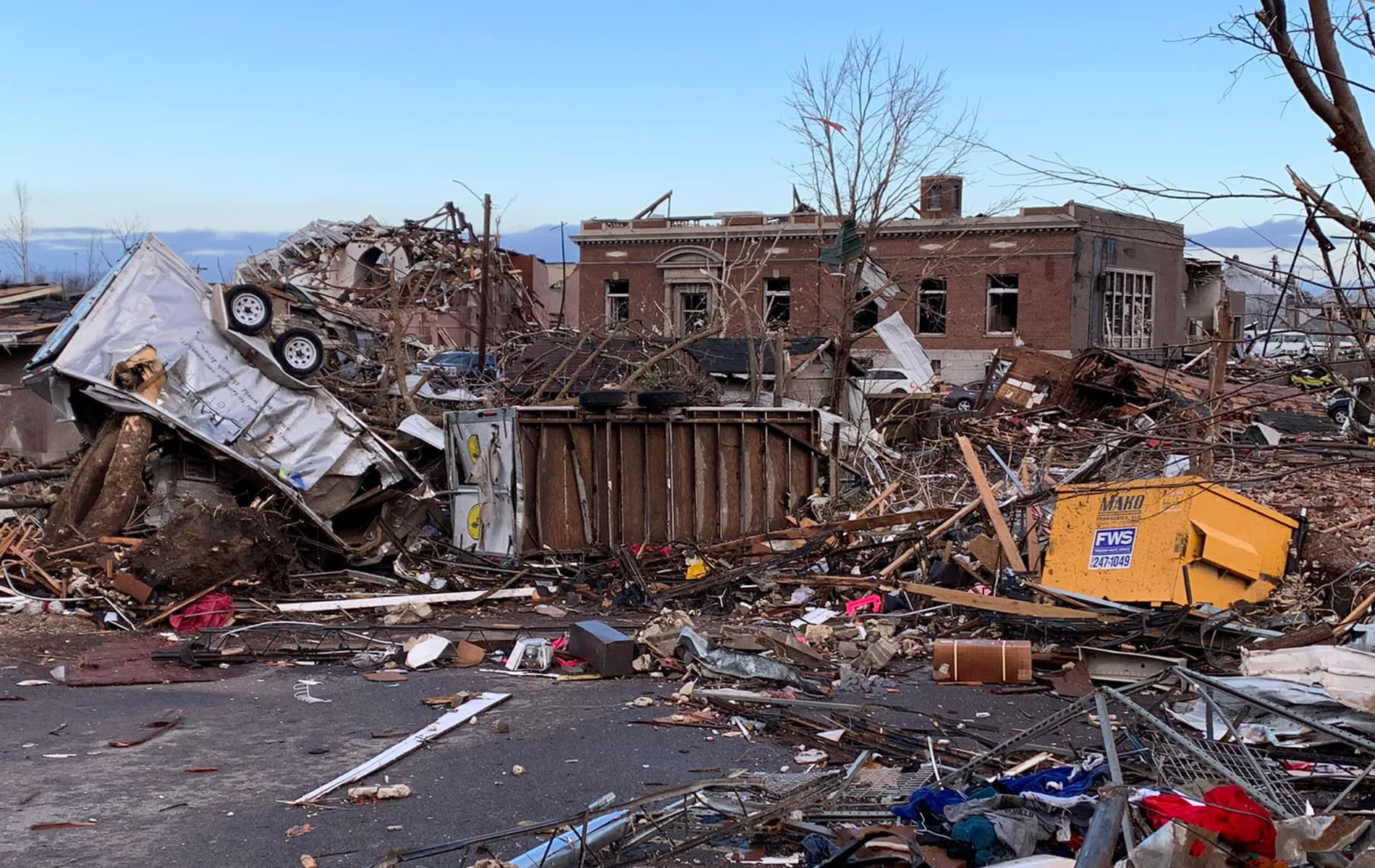 Debris is piled up in the parking lot of First Baptist Church Mayfield, Kentucky. The church building sustained significant damage in the small town where dozens were killed as tornadoes swept across six states in the wee hours of Saturday morning. (Photo from Baptist Press)

Illinois Baptist churches seeking to aid victims of a devastating swarm of tornadoes are urged to give to Illinois Baptist Disaster Relief (IBDR). Three teams of IBDR volunteers arrived Sunday in Benton, Kentucky near Mayfield, where the highest number of casualties is reported. An Incident Command Center was established at Zion’s Call Baptist Church in Benton. Two Illinois chainsaw teams and support personnel will operate out of that center.

At least 64 people are confirmed dead in Mayfield, the scene of tremendous devastation that claimed the town center, including its downtown churches. And at least 1,000 homes were destroyed in and around the town of 10,000 people. Kentucky governor Andy Beshear says the death toll is likely to go higher.

The Saline Baptist Association and Franklin Baptist Association in southern Illinois are the first units to go, sending chainsaw teams to clear debris. IBDR will also assist with leadership for chaplains and assessors at the Incident Command Center.

The best assistance for Illinois churches to offer at this time is financial support that covers IBDR expenses for transporting volunteer teams and the purchase of specific supplies on site. A special link for online giving is posted on the Association’s website, IBSA.org. Churches may also purchase Walmart gift cards sent to the donation center at Community Fellowship Baptist Church, 90 State Route 408 W., Hickory, KY 42051.

Some Southern Illinois churches have collected goods to transport to Kentucky. For material items, state DR director Butch Porter reports the greatest need is for hygiene kits in 5-gallon buckets with items such as toothpaste, soaps, diapers, shaving items, or new undergarments. They are not in need of bottled water or clothing. And in general, Disaster Relief leaders say cash donations allow them to help families with the items they really need, and without the burden of unnecessary goods.

Six people died in Illinois in the destruction of an Amazon fulfillment center, a giant warehouse in Edwardsville. No Disaster Relief recovery teams were required at the commercial property, however several pastors and DR chaplains who serve in Madison County were on scene shortly after a twister ripped through the warehouse.

Pastor Chris Sedabres of Second Baptist Church in Granite City said the ministry team, which included pastors from Wood Ridge and five women from Granite City, responded immediately. They met with workers who were rescued from the collapsed structure and families of the workers who died there. And they will follow-up later.

“Chaplains are there to offer the ministry of presence,” Sedabres said. “In that situation we need to listen and be led by the Spirit.”

Sedabres was away at the time of the tornado. As a former Amazon employee at a facility across from the warehouse, Sedabres began calling former coworkers. “Many people in this situation will have survivors’ remorse, wondering why others died but they escaped.” Some who ministered Friday night returned for a news conference on Monday, where Amazon managers and Illinois Gov. J.B. Pritzker expressed gratitude for their service.

Sedabres said the chaplains were trained by IBDR and were part of a First Responders support team that developed after the flood in Granite City in 2019.

Illinois Baptist Disaster Relief is a ministry of the Illinois Baptist State Association, with approximately 900 trained volunteers from across the state, serving with chainsaw and flood recovery teams, chaplaincy, childcare for families seeking assistance, mobile kitchens, and mobile laundry and shower units. IBDR is part of the Send Relief Network, a compassion ministry of the Southern Baptist Convention. Send Relief is the third largest disaster relief agency in the United States, behind the American Red Cross and the Salvation Army.