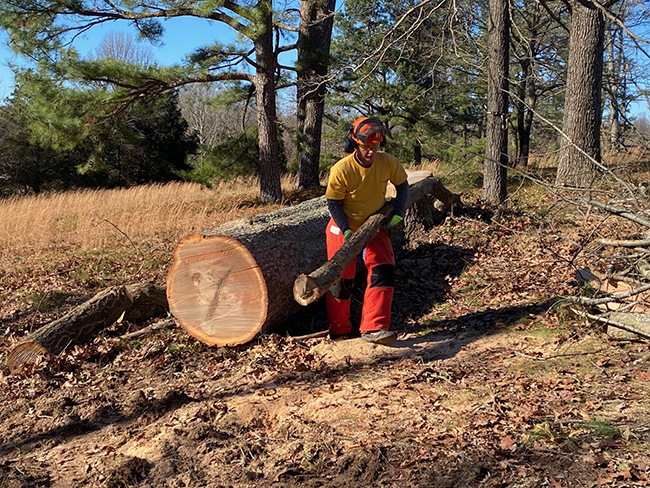 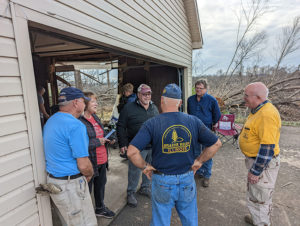 Approaching two weeks after massive tornadoes destroyed much of Mayfield, Kentucky, and other communities and left 78 dead, Illinois Baptist Disaster Relief (IBDR) volunteers remained on scene, providing assistance to victims and families. Three units responded immediately, and since then have been reenforced or replaced by additional units from Illinois. Some 90 volunteers from Illinois have been deployed.

IBDR state director Butch Porter reports the units hope to complete their work by Friday, December 24, however “rain has delayed our work, and some of our teams may need to return in the week between Christmas and New Year,” he said. “We’ll be there if we’re needed.” On December 18, Porter issued another call out for additional chaplains to reach a neighborhood that had not yet received recovery support.

Illinois chainsaw teams were first to arrive a string of storms swept the area on December 10, clearing blocked properties and roadways. Other volunteers manned the Incident Command center at Benton, Kentucky, near Mayfield, providing chaplains and assessors. And more recently, Illinois volunteers have joined Kentucky DR workers in operating their feeding units and mobile shower unit, under the direction of Incident Commander John Blasdel.

Porter says a volunteer unit from Illinois Rotary Club is expected to join IBDR workers in Benton on Monday, and a tarping unit from Indiana will arrive next week as well, to put tarps on roofs of exposed but salvageable buildings.

While traveling to Benton on Thursday, a DR trailer being towed by a pick-up truck flipped on the highway and landed upside down in a ditch. The trailer was damaged, but no injuries to volunteers were reported. The trailer was insured, but Metro East Baptist Association would welcome donations to cover replacement of materials they would have used on scene.

“The Gospel impact of relief is amazing because satisfying an immediate need helps to open the heart,” Litton told Baptist Press. “This is something we’re proud of as Southern Baptists, in the right sense, and we should be…This is our life together as Southern Baptists at its best,” Litton said. “Out here everyone knows we need each other from the associational, state level to the national level.” 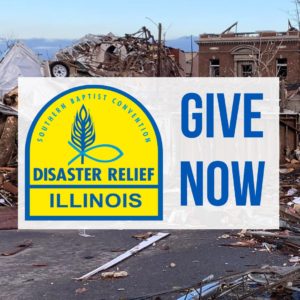 Click on the image above to donate to Illinois Baptist Disaster Relief.

Litton urged continued giving by Southern Baptists to support the volunteer relief ministry and storm victims. In Illinois, donations may be given through Illinois Baptist Disaster Relief. A link and explanation are on the Illinois Baptist State Association website main page, IBSA.org.

Southern Baptist Disaster Relief is the third largest relief agency in the nation. IBDR has approximately 900 trained volunteers who specialize in storm and flood recovery, support for feeding and shower/laundry units, childcare, and chaplaincy for spiritual and emotional support.