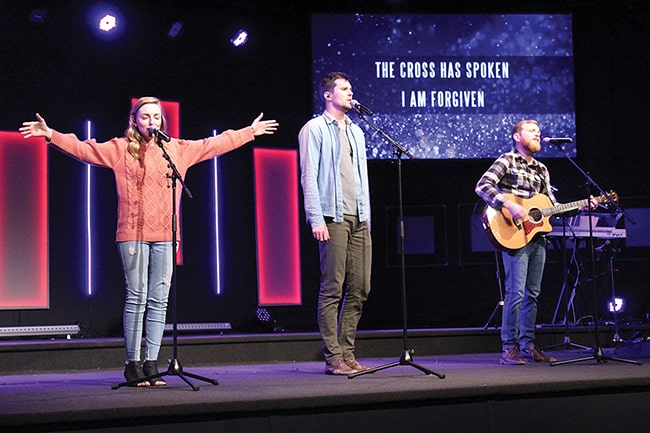 Across the country, the numbers are sobering. At least 80% of American churches are plateaued or declining, and many leaders are struggling to know what steps to take to revitalize flagging ministries.

“We need a new wave of church revitalization to sweep across America,” Rob Peters said at the Illinois Baptist State Association’s Annual Meeting Nov. 7 in Marion. At the 113th annual gathering of Illinois Baptists, messengers adopted resolutions, elected new officers, and approved a 2020 budget. Under the theme “ReFocus,” just over 500 messengers and guests in attendance also heard the call to renewed commitment to effective, sacrificial ministry to meet the great spiritual need in Illinois, where more than 8 million people do not know Christ.

In messages from the podium and corporate prayer times, Illinois Baptists were reminded of the true source of revitalized ministry.

“We need to see something in God’s churches that we haven’t seen in our lifetimes,” said Peters, founder of a revitalization-focused ministry called Corpus Vitae. “And that is a renewal and revival that only God’s Spirit can do.”

Despite nationwide downward trends in religious affiliation and worship attendance, IBSA churches have seen bright spots over the past year. IBSA Executive Director Nate Adams noted encouraging increases in missions giving and baptisms, as well as an uptick in churches affiliating with IBSA.

Still, Adams said, quoting a 19th century hymn, “Mercy drops ‘round us are falling.” His voice broke as he finished the line. “But for the showers we plead.”

Peters said the need for revitalized churches is becoming more urgent. If 80% of American churches are in some stage of decline or plateau, that means around 38,000 Southern Baptist churches fall into that category. At the same time, he added, the population is growing by about 10% every 10 years. Even though more potential churchgoers now live in America, the church participation rate continues to shrink. Every week, Peters said, 70 churches close their doors, never to open again.

In response to the trends, Southern Baptists have asked in recent years whether the denomination ought to focus on church planting or church revitalization. The answer, Peters said, is that while church planting plays an important role in building the Kingdom, it can’t be the only strategy.

“Church revitalization must be an essential part of our strategy,” Peters said. And it can’t just be a one-time occurrence. “Every local church needs to come to a place of perpetual revitalization. Jesus is always calling us as his people to new steps of faith and obedience.”

In the coming year, IBSA churches will engage in a ReFocus process designed to assess their place in God’s mission in their community, and any changes or new plans that are needed to better position the church to meet our state’s urgent spiritual need. IBSA has also created a new Revitalization Team that will be led by Scott Foshie, who previously pastored Steeleville Baptist Church.

On abuse: ‘We have to do better’

The sexual abuse crisis in the Southern Baptist Convention was a key focus of the meeting in Marion, as messengers heard how the denomination and IBSA are moving forward to prevent abuse and care well for survivors, even as new allegations of abuse continue to arise.

Outgoing IBSA President Adron Robinson, also a member of the SBC Executive Committee, noted that only a small fraction of Southern Baptist churches have signed up for the Caring Well Challenge, a Convention-wide effort to respond to the crisis uncovered in a newspaper report in February of this year.

“We have to do better, pastors,” Robinson said in a report on the abuse crisis Wednesday afternoon. “Our actions still say we think it can’t happen at my church. That’s why we have to sign up. The stories of abuse involving SBC churches tell us it can happen anywhere.”

Earlier this year, IBSA joined fellow Baptist state conventions in committing to address sexual abuse issues, care for survivors, and continue to prepare for abuse prevention. In Marion, messengers (or voters) approved a resolution condemning sexual abuse, along with measures on the sanctity of life and LGBTQ counseling. The slate of six resolutions also included appreciation of the Annual Meeting host church and small churches across Illinois, as well as a resolution encouraging pastors and congregations to engage in intentional, spiritual processes of church revitalization.

In other business, messengers adopted a 2020 IBSA budget with a Cooperative Program goal of $6.3 million. Of gifts received, 43.5% will be forwarded to the SBC Executive Committee and 56.5% will remain in Illinois to support state missions and ministry.

At the start of Wednesday evening’s worship service, IBSA welcomed 16 new churches into affiliation with the Association, and also heard from church planters working across the state. The planters represent about 70 new churches currently being planted in Illinois.

The 2020 IBSA Annual Meeting is Nov. 4-5 at the Crowne Plaza Hotel in Springfield.