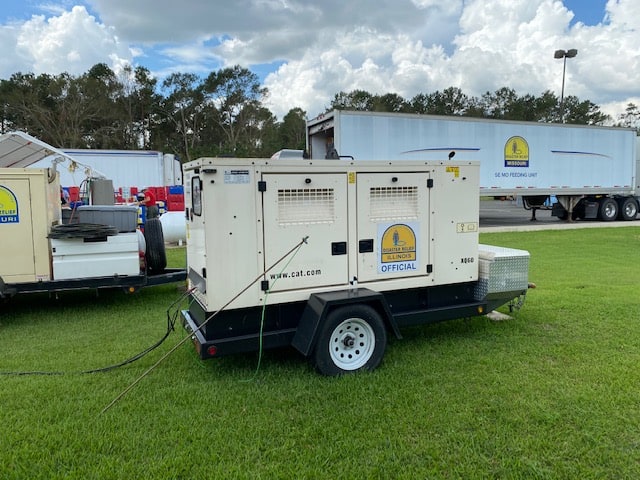 DeRidder, La. | Sharon and Glen Carty got to Louisiana on Labor Day. When they left two weeks later, they were hauling a generator that helped served nearly 80,000 meals to residents affected by Hurricane Laura. The generator, shared by several states and housed in Illinois, powered a mobile kitchen unit in DeRidder, La. It is a picture of the partnership between state Disaster Relief ministries that was on display in Louisiana, volunteers said.

The mass feeding ministry has ended in DeRidder, but Illinois Baptist Disaster Relief teams are still on the ground assisting with a massive callout that has involved several states. Sharon Carty said teams working in DeRidder had taken in 654 jobs, and people are still coming in for assistance. She estimated more than 20 groups from Illinois have been part of the response.

The callout to Louisiana has been the largest she’s ever been part of, Carty said. “We were all very touched by the complexity of this storm. We live in the Midwest, we don’t see trees the size of mobile homes.” In DeRidder, some of those trees are on top of homes. Volunteers cut down one tree that was 40 inches in diameter.

Teams are also dealing with more storms—Hurricane Sally sent home Florida volunteers serving in Louisiana, and Tropical Storm Beta has brought torrential rains to DeRidder. The conditions are difficult, Carty said. Volunteers prepared meals under a tent all day in 100-plus degree weather. Utilities have been iffy due to the storms. But there have been victories, too, including some who have come to know Christ.

“As of yesterday, we had six salvations at our site,” Carty said. “That’s the best part.” One of the salvation stories was a 12-year-old girl named Laci. Volunteer and chaplain Jan Kragness posted on Facebook, asking for prayer for Laci and follow-up for discipleship.