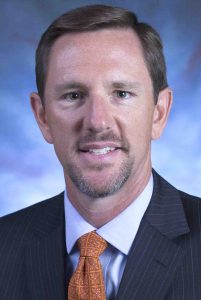 The International Mission Board trustees’ presidential search committee announced Nov. 6 that the committee will recommend Paul Chitwood, 48, to be elected as the 173-year-old entity’s 13th president.

The vote to elect Chitwood is scheduled for the Nov. 15 plenary session during their IMB board meeting in Richmond.

A former chairman of IMB’s board of trustees, Chitwood currently serves as executive director of the Kentucky Baptist Convention, the state’s largest religious organization with 750,000 members in 2,400 churches and 70 associations. He has served in the role since 2011.

During his pastorates, he served as chairman of the IMB trustees from 2008-10, part of his tenure as an IMB trustee from 2002-10. His overseas short-term mission involvement includes work in Brazil, Peru, India, China, South Africa, Niger, Nigeria, Senegal, Kenya, England, Spain, Germany, and Haiti.

“A decade ago, I had the privilege of working with IMB President Jerry Rankin, Clyde Meador, Tom Elliff, and David Steverson to pen the IMB’s vision statement,” Chitwood said. “While the wording was and is important, it simply captures the vision God has graciously given us in His Word. It’s His vision, and the culmination of the work that He has been doing through His church and, since 1845, through Southern Baptists. Our vision is unchanged: a multitude from every language, people, tribe and nation knowing and worshiping our Lord Jesus Christ.”

“It is so obvious that God has been preparing Paul for this role in so many ways,” said Rick Dunbar, chairman of IMB’s trustees and a member of the search committee from Madison, Miss. “Examine his work history, denominational experience, trustee background, educational history, leadership and team-building history; hear his heart for missions and the Lord, to be shared with the entire world; listen to his wife as she eagerly anticipates this role — and I think you will agree: We need him.”

Dunbar said the more the search committee talked, prayed and thought about Chitwood, “the more the entire committee has come together united in knowing he is God’s choice for our next president. He has the biblical foundation, a heart for missions and a proven track record of leading a big organization.”

“Little did the presidential search committee anticipate the meandering path that would be this search,” Pourciau said. “There were many twists and turns, but our commitment remained singular. It didn’t matter what path we took as long as we ended up in the right place. The right place is to locate and recommend to the trustees the person God had already chosen as the next leader of the International Mission Board.

“We are unanimously agreed that we have done just that in recommending to the IMB trustees Dr. Paul Chitwood as our next president,” Pourciau noted. “Dr. Chitwood is uniquely qualified to lead us into the next era of Southern Baptists reaching the nations. His missions heart and leadership acumen will serve us well in the years to come. I am eager to watch God work through him as he leads our international missions efforts. Yes, brothers and sisters, we did indeed arrive at the right place, and that right place is Dr. Paul Chitwood.”