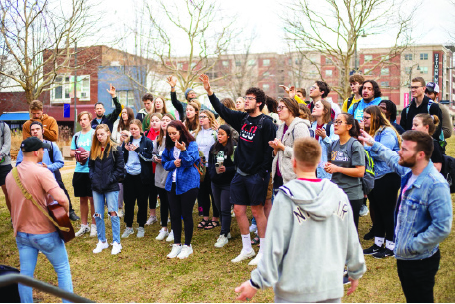 24,000. That’s the number of students on three college campuses in Bloomington-Normal who need to be reached for Jesus. Jonah Christiansen estimates that many students are not attending a local church. Christiansen is part of a team from Ankeny, Iowa that is planting Salt Church near the campus of Illinois State University (ISU) this fall.

Planting Pastor Daniel Nemmers admits the number and the life stage are daunting. “It’s the first time college students are independent and thinking about what they believe. They’re at a crossroads of tons of cultures on a university campus, and it’s a secular culture. People are telling you that the world and sin is actually going to satisfy you. So most people do what sinful people do, they choose the world.”

Nemmers has a passion to see the church reach lost college students. He also wants to ignite a spark in students who grew up in church but are in danger of dropping out once they leave home. “We spend two decades pouring into them from birth to 18, and the second they’re 19, they’re not in church anymore.”

According to a 2019 Barna Research study, two-thirds of 18- to 29-year-olds who were active as children and teens dropped out of church once they reached college age. That number has been growing for decades, seeing a five percent increase since 2011.

“If the church had grabbed the baton when they were 18, they would have created a disciple for a lifetime,” Nemmers said.

These two energetic church planters want to see God birth a vibrant church at ISU. They’ve seen it in their own church in Ankeny, Iowa. They have faith God will do the same here, so much faith that they will uproot their young families and bring them to Illinois.

During two days in March, Christiansen and Nemmers led a group of nearly 60 college students in outreach efforts at ISU. Their mission was to connect with students and invite them to a preview worship service at ISU’s Bones Center.

On an unseasonably warm Thursday afternoon at an intersection of sidewalks in front of Jesse Fell Hall, the team chatted with students passing by their white pop-up tent emblazoned “The Salt Company.” Some students kicked a soccer ball around in the grass while music played in the background. Others handed out packs of gum with a QR code linked to the church plant’s Instagram account, featuring information about the preview service that night. If it happened.

As the team talked with students, Christiansen worked the phones. ISU’s approval to hold the preview service on campus hit a snag. Permits submitted weeks earlier now required additional documentation and review. “This could have been really emotional,” said Nemmers. “To hear back on the ‘morning of’ that it might not happen.” They pleaded for grace and prayed for approval.

This service was the primary reason the team of 60 traveled from Iowa, to give ISU students a taste of what Salt Church was all about. The student team came from six different colleges in Kansas and Iowa. Each had given up their spring break to serve the church. Each had a Salt Network church plant as part of their discipleship story.

Salt Network is a Baptist collegiate church planting ministry working in strategic partnership with the North American Mission Board and Baptist state associations, including IBSA. Their goal is to see “churches planted, communities strengthened, and gospel witness extended to the ends of the earth,” starting with the 400 major university campuses in North America.

IBSA’s Kevin Jones (left) talks with Christiansen and a member of the student planting team from Iowa.

That emphasis on the multi-generational local church extends to their work with existing local churches.“One of the first things I did when Salt Church  came to Bloomington the first time was try to connect them with other churches and pastors in the area,” said IBSA Church Planting Director Kevin Jones, who focuses on collegiate ministry. “I knew how important that would be and how much they wanted those connections.”

Journey Church in Normal is one of those churches, serving as local sponsor for the church plant at ISU. Executive Pastor Clark Killingsworth said they have been in connection with Nemmers for over a year. Journey Church has provided prayer and encouragement, as well as help for planting team members looking for homes and jobs.

The local cooperation also extends to East Central Illinois Baptist Association. ECIBA is providing support through their Kingdom Growth Fund. Killingsworth, who also heads the association’s Lead Team, said this two- to three-year partnership has been a real blessing to Nemmers and the planting team.

“Almost 90 students came that night,” Nemmers said. “Then two students placed their faith in Christ after the message. We got over 100 students’ info who were interested in Salt Church. Looks like God answered our prayer for momentum leading up to this fall.”

Jones said he prays that God does big things on campus in Bloomington, and that God will repeat it on college campuses across Illinois.