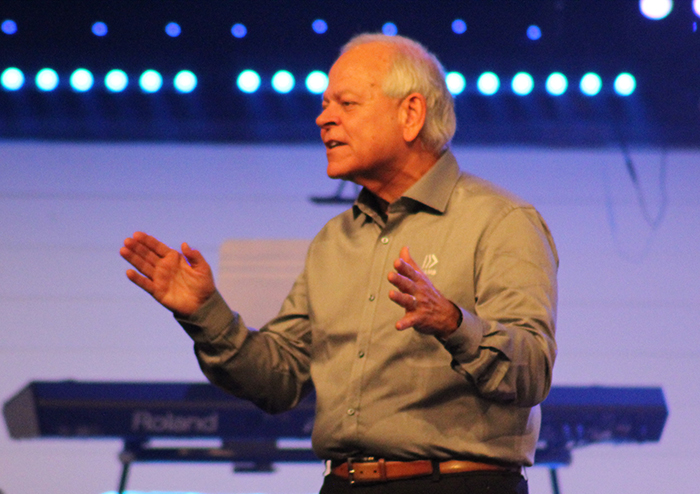 Johnny Hunt, NAMB’s Vice President for Evangelism, led a worship rally at First Baptist Church of O’Fallon as part of a two-day “Who’s Your One?” evangelism workshop March 6-7.

We must believe God can save people, if we are to witness to them, Johnny Hunt told evangelism leaders in Illinois Sunday night. “The reason we don’t witness is because we see people in actuality instead of possibility,” he said. Hunt led a worship rally at First Baptist Church of O’Fallon as part of a two-day “Who’s Your One?” evangelism workshop. His message was pointed: “Do we still believe that apart from Jesus, people who die spend eternity in hell?”

The North American Mission Board’s tour bought pastors and church leaders together for inspiration and equipping. FBC O’Fallon’s music team led worship, and Hunt preached from John 1. The Georgia pastor and now NAMB’s Vice President for Evangelism quickly focused on the necessity of person-to-person invitation to faith. A personal invitation from a friend, family member, or neighbor has always been the most effective way to win people to Christ.

“Somebody told me,” Hunt said, “and I’ve never gotten over wanting to tell somebody else what God has done in my life.”

With a witnessing plan originated by former SBC President J. D. Greear, the tour inspires people to pray for and invite at least one person to church consistently, until that person comes to faith in Jesus. It begins with committing to that one name–your “one.”

IBSA Evangelism Director Scott Harris said Hunt’s personal story and strategy can inspire Illinoisans to share their faith. “So many of the people our churches need to reach are just like Johnny before he came to faith,” Harris said.

Hunt told the congregation how he, as a high school dropout, descended into alcoholism. He managed a pool hall and worked part-time at a hardware store. At that job, his boss asked him to come to church. Hunt repeatedly said no, but the man persisted. Hunt finally said yes, and eventually came to faith in Christ.

Harris has partnered with NAMB to bring the “Who’s Your One?” tour back to Illinois with a stop in Chicago in 2023.

Harris initiated a similar two-day event in Illinois last year, with regional versions starting next month.  IBSA’s Ignite Evangelism Conference will equip leaders and churches to reach their communities for Christ. This series of Sunday night rallies and Monday morning workshops kicks off April 3 at Logan Street Baptist Church in Mt. Vernon. To learn more and to register, go to IBSA.org.