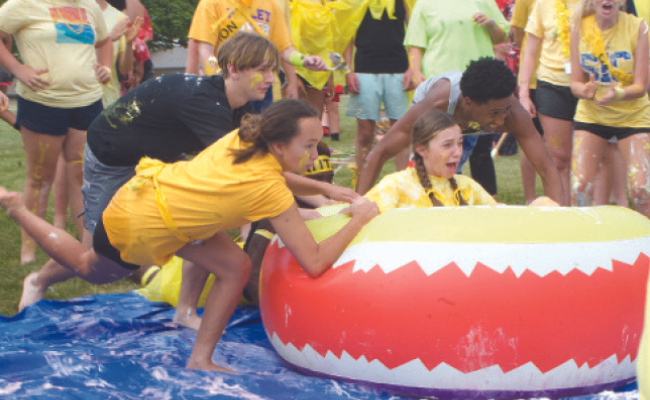 Tubing on a water slide becomes an exercise in team building and leader development. And it’s fun!

Do you want help?” Becky Byars says as she steps toward the nervous seventh grader. The student has just been called on to pray out loud in front of her purple school peers, the youngest group at IBSA’s Super Summer discipleship week.

Byars, a leader from First Baptist Church in McLeansboro, supplies the first line of a prayer and the teen takes over from there, boosted by the assist. Across the Hannibal-LaGrange University campus, 175 Super Summer students experience this mix of challenge and encouragement, independence and guidance.

The week isn’t billed as a traditional camp. Instead, the focus is on discipleship, leadership, and growing deeper as a follower of Christ. Students are grouped by age into color-coded schools, each with a different focus for the week—salvation, identity, community, apologetics, kingdom living, foundational beliefs, and outreach. 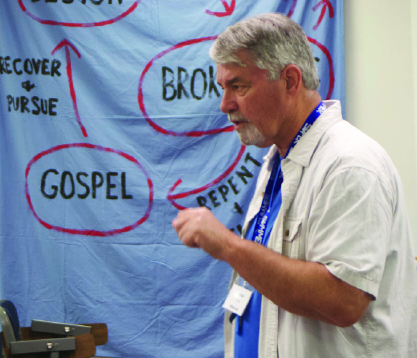 Lonnie Trembly has served at Super
Summer since 1997. Here he teaches the 3 Circles method
of faith sharing.

“We’re pressing hard to get them step into leadership and ministry, whatever it might be,” said Lonnie Trembly, dean of the blue school for incoming freshmen. Trembly retired this summer after 14 years as student pastor at First Baptist Church in Columbia. But he isn’t ruling out a return to Super Summer, where he has served every year since 1997.

“I think all the leadership that comes here has been coming here for years, as much as they can make it, because of the results that we see,” he said. Trembly’s voice breaks when he talks about how many students he’s known over the years whose lives have changed because of this week.

“Super Summer put them in the right place.”

Trembly doesn’t shy away from challenging students. On mission trips, students are expected to lead devotions and are ready to share their faith. At Super Summer, he starts school sessions by asking a few students to share their personal testimonies.

“I don’t believe in teenagers,” he said. “I believe in adults-in-training.” Expectations are high during this discipleship week, with several leaders over the years echoing a similar refrain: students aren’t the future of the church. They’re the church right now.

“We ask them to unplug from the world and, as a Christian, go deep,” Trembly said. “Put aside everything that’s possible to put aside. Do everything you can to hold onto Christ, for the sake of your own soul.” Super Summer is designed for students who are already growing in their faith, but for some, Trembly said, it’s the first step. “We see a lot of kids that come to salvation because they’re good church kids, they’ve got all the answers, but the Holy Spirit of God has never lit them up.”

In purple school, Trembly’s son, Matt, is leading the youngest Super Summer participants in learning the basics of the Christian faith. The progression from school to school is designed to help students build onto a firm foundation, said Matt, who has been part of Super Summer as many years as his dad.

“Super Summer is about discipleship. It’s not your typical summer camp where you go canoeing and swim in the lake and have worship services at night so you can check off the church box.” In addition to twice-daily school sessions, students choose “intensives” on topics including reading the Bible, biblical manhood and womanhood, and intro to guitar.

“It’s an intensive discipleship week, and we don’t just spend time talking at students,” said the younger Trembly, who takes time off from his IT job to serve at Super Summer. “We’re involving them and challenging them.”

Down in the blue school room, students take notes while Lonnie Trembly teaches, looking up occasionally to answer the questions he asks. He gives students responsibility and expects them to be respectful, Trembly said.

“Generally, I find, they step up to the plate.” 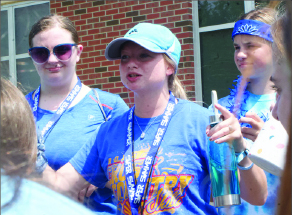 As an adult, Alexis Fromme now leads students in Super Summer which she attended since junior high.

Alexis Fromme stands in a circle of blue school students, delivering a pep talk before the upcoming all-school recreation tournament. In a few minutes, the high school freshmen she’s helped lead this week will slip and slide through a chaotic series of relay events. Right now, they listen as Super Summer veteran Fromme encourages them to do their best and be vocal with their encouragement of other teams. (It earns you extra points for the final tally.)

“I have attended Super Summer every single year since I could!” said Fromme, an engineer and student ministry leader from First Baptist in Bethalto. There wasn’t a purple school when she started but she worked her way through the others—red, blue, orange, yellow, and green—until ending up in the grey school led by Phil Nelson, pastor of Lakeland Baptist Church in Carbondale.

That final year was pivotal, Fromme said. As Nelson reminded them this was their last year as Super Summer students, she realized she didn’t want to leave for college and fall away from her faith. Buoyed by accountability from her local church and Super Summer friends, she started the school year instead with a new commitment to read the Bible. She started writing out Scripture passages, a method suggested by one of her grey school leaders.

“God really used Phil and the other grey school leaders to motivate me to do better in my walk with Christ,” Fromme said. “It’s a true joy to be able to still serve with people who were leaders when I was a student and with those who were students with me at Super Summer.”

For some like Fromme, Super Summer is a step toward maturity in their relationship with Christ. For others, it’s the beginning. 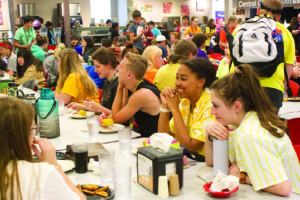 Students gather to enjoy a meal in the cafeteria.

Austin Luebbers has been attending church regularly since some friends invited him six months ago. He traveled to Hannibal for his first Super Summer with the group from FBC Columbia. Luebbers was a student in grey school, led again by Phil Nelson. He was tired during the first school session after a day of travel. But things changed when Nelson told students the main question Paul asked the Colossians: Is Jesus enough?

“That really opened up my eyes that he was enough,” Luebbers said. Through the week, the love of God in light of Luebbers’s own imperfections came more into focus, he said. And on Thursday, Luebbers approached Trembly after the group from FBC Columbia met to close out the day. They prayed together, and Luebbers decided to follow Jesus.

The young man uses the imagery of eyes being opened often when describing his week at Super Summer. Life back at home has been pretty normal, he said, except he’s looking at things with a new point of view and a new sense of accountability. Luebbers and two of his friends are committed to meet together for Bible study once a week.

“Students accept Christ at this camp,” Fromme said. “They rededicate their lives to the Lord. They realize that now is the time to become serious in their faith, and nothing is better than walking alongside them as the Holy Spirit works in their lives.”

Lindsay Wineinger wasn’t a Super Summer student in high school, but she’s long been involved in its leadership. “When you see God moving, you go,” said next year’s Super Summer director and current president of Illinois WMU.

“It’s beautiful to see kids coming in right out of sixth grade, and being with the organization long enough where I’ve seen some of my seventh and eighth graders go through all of the different school levels and graduate out, and then come back and be leaders for those schools.

“It’s a beautiful picture of what true discipleship is as well.”

As dedicated as Super Summer students are—to their schools and to the intense discipleship process found here—the commitment of its leaders is arguably even stronger. Their desire for the next generation of Christians to grow as disciples is clear. And they’re seeing real results.

“It’s not just a place for students,” said Lonnie Trembly. “I think all the leadership that comes here has been coming here for years, as much as they can make it, because of the results that we see.”

As director, Wineinger hopes to visit sixth graders at IBSA’s summer camps and share with them the opportunities coming their way to participate in Super Summer. This year’s Super Summer theme, “Influencer,” reflects that way of thinking: one generation passing down a legacy of faith to the next.

“It’s a beautiful depiction that no matter what age you are, you are an influencer of the next group,” she said. For students and leaders at Super Summer, the legacy is one of God at work. He goes above and beyond every year, she said, from students who aren’t expecting to have their lives changed, to long-time leaders who say this was the best year yet.

“God shows up in big ways, and I think a lot of us come back because we just get so excited for what God has for the next year.”