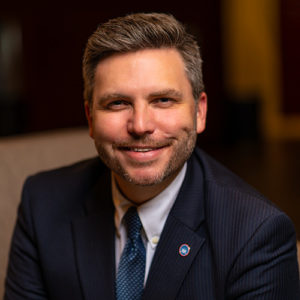 Brent Leatherwood was elected by unanimous vote to head the Southern Baptist Convention’s Ethics and Religious Liberty Commission at the ERLC Trustees fall meeting in Nashville, Tennessee on Tuesday. His nomination and approval by secret ballot came a year after he was named Acting President following the resignation of Russell Moore who had opposed leaders of the SBC Executive Committee (EC) over their handling of claims of sexual abuse in SBC churches and for their lack of support for abuse survivors.

Leatherwood came to the ERLC staff in 2017 after four years as Executive Director of the Tennessee Republican Party. He was first Director of Strategic Partnerships, then Vice President of External Affairs and Chief of Staff under Moore.

Leatherwood’s election to the ERLC presidency was welcomed by leaders in Illinois and in the national SBC, but his year as Acting President has not been without controversy.

“Southern Baptists need a biblically grounded, winsome, effective ERLC in these challenging times,” ERLC trustee Scott Foshie from Illinois said, “I believe Brent is the leader that God has called to lead in carrying out this exciting ministry assignment that is also fraught with challenge.”

In a news released posted by ERLC moments after the election, Leatherwood received ringing endorsements from national SBC leaders and the governor of Tennessee.

“Brent has led wisely and courageously as the interim president during what can only be described as a tumultuous and strident period in our nation and our convention,” the first President of the ERLC, Richard Land, said. “Southern Baptists and America both desperately need the information, inspiration, and guidance the ERLC can provide under Brent Leatherwood’s leadership.”

Leatherwood’s stance on abortion angered some Southern Baptists who favor a hard line and demanded criminal punishment for women who terminate a pregnancy. That included SBC Presidential candidate Tom Ascol, who called for Leatherwood’s dismissal as Acting President.

Ahead of the U.S. Supreme Court ruling overturning Roe v. Wade, Leatherwood signed an open letter drafted by the National Right to Life Committee, along with 75 other evangelical leaders, that urged compassion for women who have had abortions, calling them “victims of abortion.” Ascol tweeted in response, “the SBC has a rogue entity in the ERLC” and urged the firing of Leatherwood. Ascol holds a “no compromise” position on abortion, which does not support any legislation short of a total ban.

Leatherwood’s actions as interim leader have been better received by many connected to the ERLC. While Moore’s eight-year tenure was marked by conflict over political positions, particularly those involving immigration and the Trump administration and resulting in withdrawal of support from some large deep-South churches, the Acting President has mostly stayed away from national politics and issues that seemed to distance ERLC from grassroots Southern Baptists. ERLC has spoken to pro-life issues, defended crisis pregnancy centers, and raised funds to place ultrasound machines in those centers through its Psalm 139 project.

Leatherwood has not appeared frequently on national news programs this year or written editorial opinions for newspapers as Moore did, or as ERLC’s first President Richard Land did before him.

Within weeks of assuming temporary leadership, Leatherwood enabled interaction among ERLC trustees and supported moves to better inform the board of actions by the staff and senior elected officers, a complaint that was leveled against Moore especially as his administration became embroiled in controversy in his later years. Leatherwood’s actions drew good reviews.

“Over the last year, Brent has worked to develop processes to enhance communication and transparency for our board,” said Foshie, former pastor of Steeleville Baptist Church and presently Health Team Leader for the Illinois Baptist State Association. “This leads us to have a high level of trust and optimism as we think about the future of the ERLC under Brent’s leadership.”

It was Leatherwood who asked messengers at the Anaheim convention to turn aside an effort to defund the ERLC, thereby abolishing it. Instead, he pointed to a renewed mission post-Roe to have impact on pro-life legislation on the state level, where the abortion argument is now located.

“That is exactly what we have been doing at the federal level, and we look forward to doing it at the state level, as well as to defend religious liberty and, of course, spread the gospel of Jesus Christ,” Leatherwood said. Foshie, among others, hailed the state-by-state strategy Leatherwood has implemented.

On his professional biography at LinkedIn.com, Leatherwood calls himself “a bridge-builder who values the importance of institutions in our nation’s civic life.” What became clear in the last two years is the considerable bridge-building that must be done by ERLC within the denomination and with the people in the pews.

“I have found Brent to be a winsome leader who serves Southern Baptists with skill, passion, and humility,” Foshie said, as he urged prayer for the new ERLC President.

Leatherwood is a 2003 graduate of the University of Central Florida. He served as a legislative aide to Florida congressman Connie Mack on Capitol Hill, among other political and campaign positions. He and his wife, Meredith, have three children. They live in Nashville.