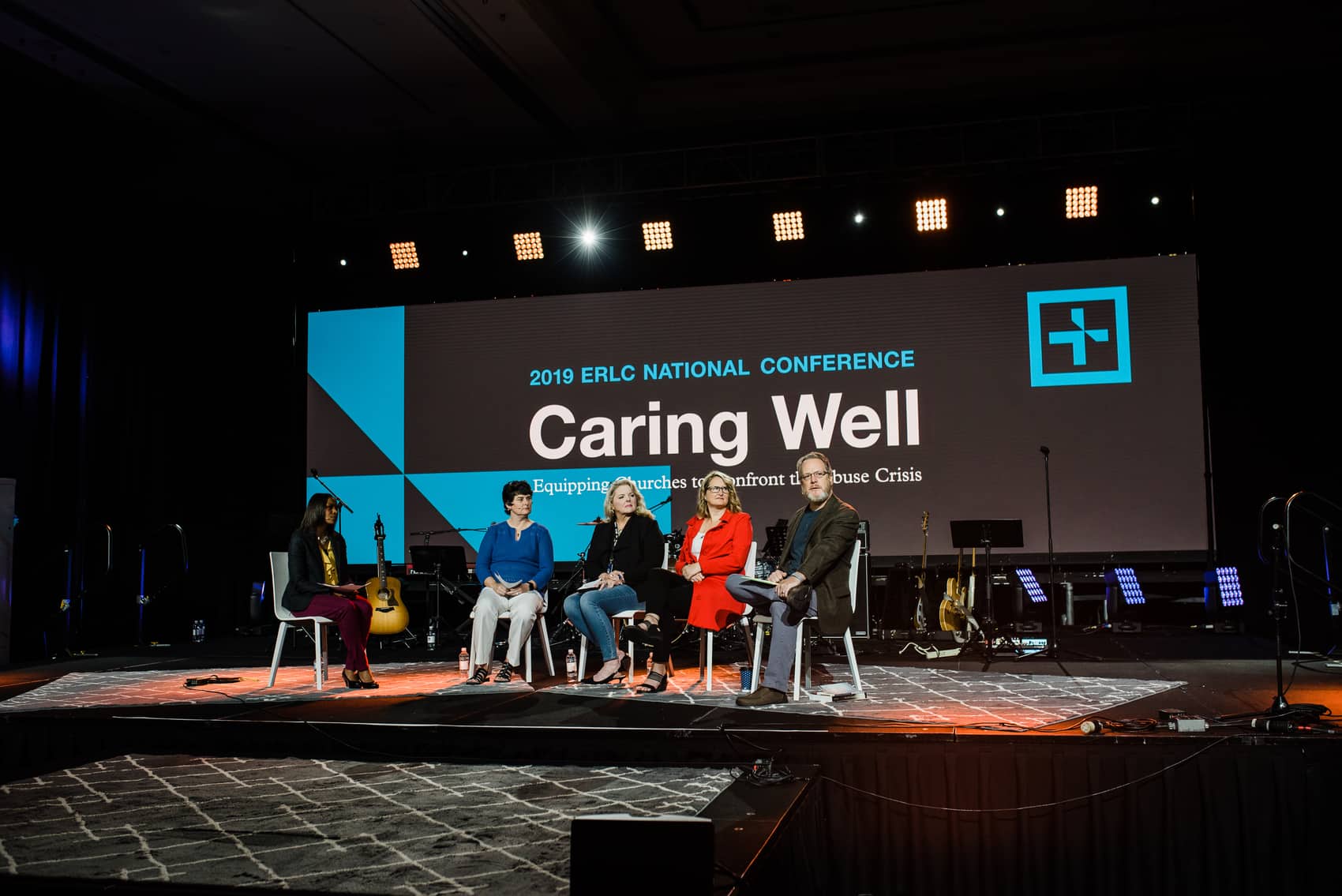 Sarah Bordewick left Texas resolved to do some things differently at her central Illinois church. The director of family ministry at First Baptist Church in Mt. Zion usually attends a kids’ ministry conference in the fall; this year, she chose one on preventing sexual abuse.

In February, a report in the Houston Chronicle uncovered more than 700 victims of sexual abuse in Southern Baptist churches and ministries. The multi-part series of articles shone a spotlight on the tendency of some churches and leaders to turn a blind eye to abuse, silencing victims and, in some cases, allowing perpetrators to move on to other churches and leadership roles.

In response, the SBC launched the Caring Well Challenge, calling churches to take responsibility for preventing sexual abuse and caring for survivors inside and outside the church. The Caring Well Conference Oct. 3-5 was a training ground for church leaders hoping to protect kids in their ministries and to help heal the wounds of those who have suffered abuse.

In the spring, the Ethics and Religious Liberty Commission changed the topic of their annual national conference to Caring Well. Bordewick modified her usual conference plans too.

“The statistics show that so many people have experienced this,” she said. “It’s so prevalent that we have to be talking about this.”

Repenting from silence
The Caring Well process in the SBC has revealed that not talking about abuse has long been the norm in many churches. The silence has been devastating to survivors already reeling from the trauma of abuse.

In Dallas, survivor advocates, psychologists, and church leaders called Southern Baptist churches to be accountable—to listen, to report, to prevent, to care—on the difficult, messy road to healing after sexual abuse.

“Only the work is going to work,” Beth Moore said in her keynote address in Dallas. The SBC has earned distrust; now we must earn back trust with humility, said the author and Bible teacher, calling churches to resist defensiveness and deflection. “Take care of the sheep,” Moore said, “and learn how to smell a wolf.”

Over the past several months, survivors of sexual abuse have come forward to share their stories. In Dallas, the audience listened with rapt attention as leaders like Mary DeMuth talked about unthinkable, almost unspeakable abuse.

“I’m tired,” said DeMuth from the platform. “I’ve been talking about this issue for decades, often in empty rooms.” In Dallas, though, a capacity crowd of more than 1,650 registered attendees listened to the author share her story of sexual abuse that, while not occurring in a church setting, has implications for ministry. As a 5-year-old, DeMuth was pushed out the door by a babysitter into the care of teenage boys who raped her.

She eventually told the babysitter, who said she’d tell her mother. The next day, though, the babysitter again let the boys take her away. “There is not one human being on this earth who will protect me,” DeMuth remembers thinking. Her babysitter preferred complacency to decency, she said, and the church does the same today.

The Caring Well Challenge, an 8-step process for churches toward abuse prevention and care for survivors, kicked off in August in a relatively small number of SBC churches. Baptist Press reported just ahead of the Aug. 25 launch that about 750 churches (of more than 47,000 in the SBC) had signed up.

SBC President J.D. Greear has made abuse prevention and survivor care the major theme of his presidency, appointing an advisory team that has created for churches a new training curriculum on abuse. Greear spoke quietly but insistently in Dallas, calling church leaders to look beyond the myths surrounding abuse toward better, more sacrificial treatment of the people in their care.

Greear called by name several abuse survivors, including DeMuth, whose words he said have been mischaracterized as “attacks from adversaries instead of warnings from friends.” It’s wrong to label them as merely bitter, said Greear. When their warnings weren’t heeded, their anger was an appropriate response—and a biblical one.

If that frustration was part of the conversation in Dallas, it was the main headline online. Twitter users posting under #CaringWell called for more action (and less talk) from the Southern Baptist Convention on the topic of abuse, including the creation of a registry of SBC abusers. The concept of an offender database has long been a flashpoint in the discussion around abuse because it comes into conflict with the Baptist doctrine of church autonomy. Without a central governing body handing down policy to individual churches, what does a unified response to abuse look like in the SBC?

Amy Whitfield, a newly appointed associate vice president at the SBC Executive Committee, gave one answer during a panel discussion in Dallas. “Autonomy does not absolve us from accountability,” Whitfield said. “We need to be really clear on that.”

Helping ‘prickly people’
The sexual abuse Andrew Schmutzer experienced as a child didn’t ultimately drive him away from the church. But he did have to rebuild his faith from the ground up. His abuser was his father—a pastor. Schmutzer, a professor at Moody Bible Institute, shared his survival story in Dallas. He spoke with the Illinois Baptist after the Caring Well conference about how churches can care for people in the aftermath of abuse.

“Their pain makes them prickly people,” he said. “If we don’t rescue them in their woundedness, they will turn to society. They will find meaning for their pain, whether it’s with a disorganized sexuality, with a very confused sense of self, and God too, probably.”

Schmutzer described a survivor’s likely thought process about God in heart-wrenching detail: Where was God? If he can count the hairs on my head, or catch a sparrow before it falls, why didn’t he stop my abuser?

Survivors not only wrestle with complex questions about God and faith, he said, they also often suffer in difficult marriages, disoriented sexual identity, substance abuse, mental illness, and the list goes on. Such a multi-layered problem doesn’t have a simple, “confess it to Jesus” and move on solution, Schmutzer said. Rather, he advised several strategies to churches looking to care well:

Schmutzer noted there are a surprising number of biblical texts that identify abuse, rape, or sexual exploitation. “It’s time to pony up here, and start preaching the hard stuff,” he said. “If we as leaders don’t name it, we are forcing that 12-year-old boy or girl to ‘out’ their own story.” Preaching difficult texts gives abuse victims an “on-ramp,” he said, to grieving abuse and healing from it.

Saying nothing is an answer too, and not a helpful one, Schmutzer said. “When it comes to abuse, silence will always help the abuser, not the victim.”

Better ‘wolf’ detection
Carol Hogue remembers feeling “creeped out” by the man hired as organist at the church her husband pastored. But the couple grew to know the man, a retired YMCA director, and adopted him into their family. On a Sunday evening, though, the Hogues’ son told them he had been sexually abused by the man.

“When we hired this man to be our organist, it was through the ‘good ole boy’ system,” Hogue said in Dallas, nearly 20 years later. “That’s a dangerous, dangerous system. We didn’t even have this guy’s resume.”

The family went through a long, difficult, public process, resulting in Hogue’s work with Darkness to Light, a child abuse prevention agency dedicated to educating adults. In their current church, Hogue said, “We’ve been able to do it the right way.”

“You have to pay attention to the details,” she advised church leaders at Caring Well. “No one is exempt from any sort of training or any sort of background check. You don’t let anybody slip through.” Everybody should be subject to the same policies, Hogue said. “It doesn’t matter if they’ve been there a hundred years or not.

“That’s going to ruffle some feathers.”

Illinois’ Bordewick acknowledged that introducing new policies, like an application and interview process for volunteers, could be met with pushback because of the extra work required, or the belief that “it can’t happen here.” There can be tension between recruiting and keeping much-needed volunteers, and implementing best practices for keeping kids safe.

But, Bordewick said, “If we can’t keep our kids safe, we don’t need the volunteers.”

Child sexual abuse continues to be a problem, Love said, because we don’t understand it, and therefore our efforts aren’t related to the risk. In Love’s words, “We’re building the wrong fence.” The most common protective measures are designed around “stranger danger”—teaching children to avoid people they don’t know. But the vast majority of victims are abused by people they know and trust.

Love and Norris aid churches in building fences to keep out the largest percentage of abusers—those who target specific genders and ages of children.

“Effective screening keeps wolves out of the sheep pen,” Norris said. But the number-one practice churches have in place to protect children isn’t enough, she added. Fewer than 10% of abusers ever encounter the criminal justice system, which means a criminal background check will not flag a large majority of abusers.

Instead of relying solely on background checks, Norris urged churches toward a multi-step screening system that understands the grooming process by which abusers identify and target potential victims. She said screening should include an application, interview, references that are checked, a criminal background check, and access to past employment and volunteer history.

In Mt. Zion, Bordewick plans to implement an interview process for volunteers, and to be more proactive about calling references. Her church already uses a check-in and check-out system for children, and background checks for volunteers who work with kids and teens.