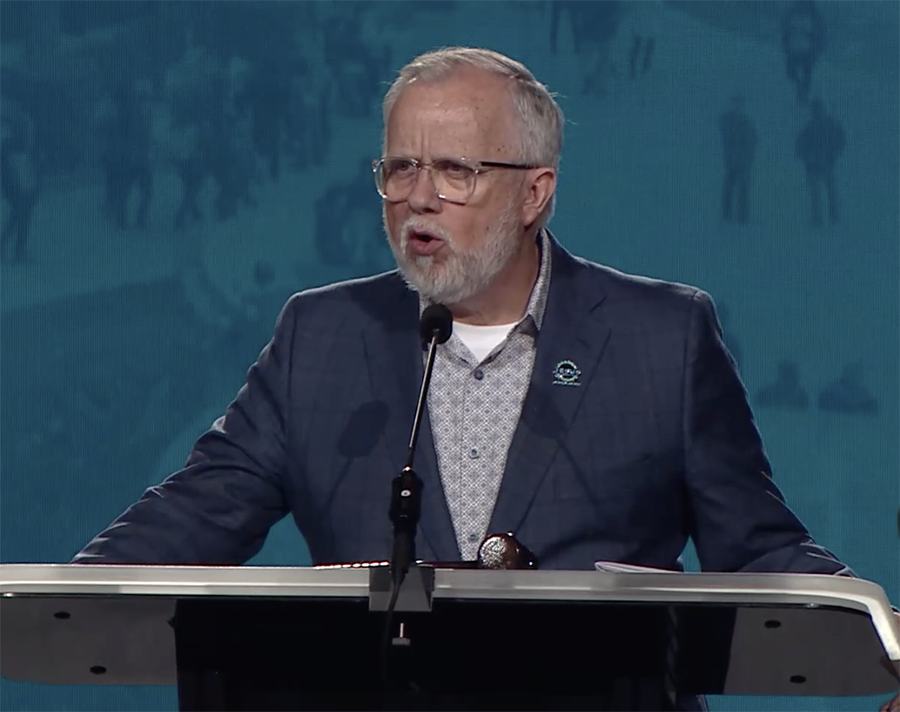 “I believe this is a ‘come to Jesus’ moment for us as Southern Baptists, outgoing SBC President Ed Litton told more than 7,500 messengers in the opening session of the 2022 Annual Meeting. Messengers came to the convention center across the street from Disneyland to act on recommendations from the specially appointed Sexual Abuse Task Force, to elect a new president to replace Litton who chose not to run for a second term, and to bring a raft of motions.

Some 23 motions were proposed in the morning session alone, many advocating transparency in SBC Entities, the North American Mission Board in particular. One advocated a renewed boycott of Disney following the release of an LGBTQ line of toys.

The morning session ran an hour over time, as messengers heard a recommendation to study the meaning of “pastor” in SBC churches, as part of a motion last year to disfellowship Saddleback Church for ordination of women to pastoral positions. Debate over amendments to the motion to form a study group drew motions from the floor from two seminary presidents on opposite sides. Southern’s Al Mohler was against it, Southwestern’s Adam Greenway for it with amendments. An inconclusive vote by raised hands on an amendment required a ballot vote and delayed continuation of the debate until a later session.

Similarly, presentation of resolutions brought motions for amendments and a string of comments from messengers at the microphones and slowed action.

For outside observers, the tense and sometimes argumentative tenor of the morning session raised questions about pending messenger response to the SATF report and its recommendations in the afternoon session.

Before that began, Litton spent most of his one sermon as SBC president calling for compassion—for survivors and for lost people in the world. “We can’t say we’re the greatest mission-sending body in the world and have a heart that lacks Jesus’ compassion,” Litton said.

He pointed to the Greek word for compassion often attributed to Jesus and translated it as “gut punch.” Then he applied the concept to the report on abuse in the SBC.

“There’s no doubt in my mind that when you read the report, you felt a gut punch,” he said. “This is our gut punch, because we didn’t see what we saw, but once we see it, we need to feel it.”

Litton repeated an apology to abuse survivors and challenged fellow Southern Baptists. “Some of you are battered and bruised…worn out either because of a sinful condition or the sin of others…. If we are not moved to action, we will become indifferent.”