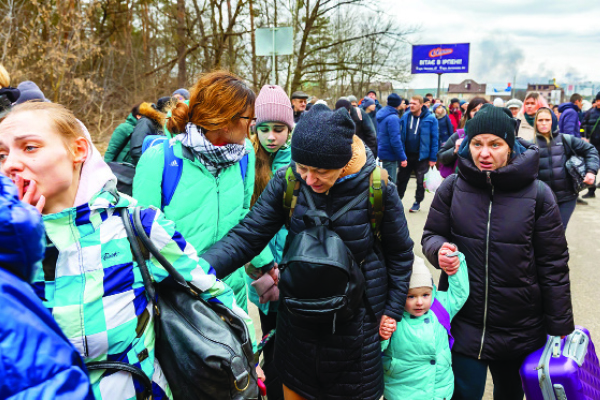 14 million people have fled their homes in war-torn Ukraine, and 6.5 million of them have left for neighboring countries. 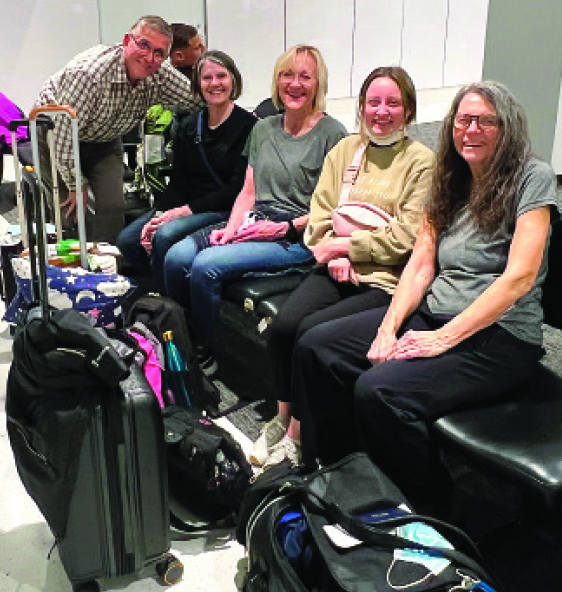 Waiting for their flight at O’Hare Airport in Chicago, Dr. Randy Oliver (left) and Tam Foster (right) met up with nurse practitioners from Georgia and Iowa and a nurse from Missouri who completed their team.

When Randy Oliver saw news of the Russian invasion of Ukraine, the doctor from Southern Illinois knew he would be going to the region again. And when he received notice from the International Mission Board that Ukrainian refugees were flooding into nearby countries, the family physician quickly joined a five-person medical mission team that included himself and Tam Foster who serves as their pharmacy tech.

Oliver and Foster are both members of First Baptist Church of Metropolis. Like many from the church, they are globetrotting missions volunteers.

The doctor knows the area well. Oliver has served on teams in Ukraine, focusing on the Donbas region in the eastern third of the nation. “The church was alive and well in the Donbas,” he said, before the invasion.

Donbas has been a major target for the Russian army. A large portion of the 14 million people who have been displaced come from there. Over 6 million have left the country and flooded into nearby Poland, Romania, and Moldova.

“We were at a children’s camp where the refugees were housed,” Foster said of their trip to Moldova in April. “We heard a lot of sad stories, of course, of leaving home and family members who didn’t want to leave.

“It was heartbreaking, what the churches, pastors, and missionaries that we knew are going through,” Foster said.

Most of the medical care for refugees was supplying medications and tending to emotional distress. “We were able to share the gospel and try to offer some assurance,” she said.

Sharing the gospel is the reason for their medical trips, Foster said. “Dr. Oliver says anybody can go help people physically, but we have to help them spiritually. He says if we can’t share the gospel, he won’t go.”

Oliver remembers an elderly woman from Odessa who had a shrapnel wound. “She and her husband were working in their garden when the mortar round came in.”

She dragged her husband to their house, then transported him to the hospital. After two operations, he died on the third day. “She lost her husband of 47 years, her home, and was afraid to stay in the town where she lived her whole life,” Oliver said. She cried much of her time with the team, he said.

“I can treat your wound and give you medication and talk about your anxiety,” he said to the woman, “But I can tell you that when bad things happen, God is there. He loves you, so much so that he gave his Son for you.

“I could tell her about the gospel,” Oliver said, “and I did.”

Both Oliver and Foster credit Pastor Joe Buchanan and Associate Pastor Cliff Easter for the missions movement that began at FBC Metropolis church more than a decade ago. And Nelda Smothers, a retired teacher, is a fixture on mission trips and encouraging missions.

The list of places where the church has served reads like a geography category on Jeopardy! Foster names Czech Republic, Brazil, Ecuador, Kenya, Niger, and Uganda off the top of her head.

“Covid shut us down that one summer, and everybody was about to have a fit because we couldn’t go!” Foster said.

A student group will head to Spain this summer to help church planters make contacts with residents in Madrid. The students will also participate in GO Chicago in July, returning to the city to work with IBSA and church planters.

The medical team will travel to the Yucatan in Mexico in early June for a trip combining medical missions, construction, and ministry to children.

They’re definitely on the go.