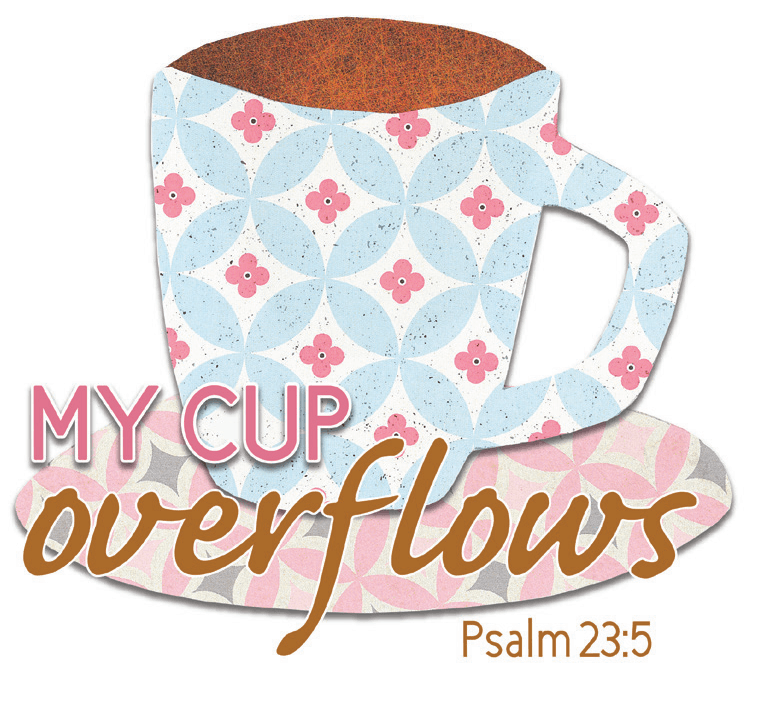 “My Cup Overflows” based on Psalm 23:5 is the theme of the annual IBSA Ministers’ Wives Luncheon. They’ll meet Wednesday, November 3 at the IBSA Building starting at 8:30 a.m. and conclude with lunch.

“God led me to the theme because I know from talking to ministers’ wives that ministry can be awesome,” said Jeanette Cloyd, “but it can also cause a bit of stress and anxiety. No matter what life is like in the places we are, we can see God at work. Our cups truly overflow with his goodness.”

Cloyd is president of the Ministers’ Wives Fellowship and the wife of Brent Cloyd, Associational Mission Strategist at Greater Wabash Baptist Association. Cloyd’s husband has also pastored eight churches—three in Missouri and five in Illinois—giving her plenty of experience as a minister’s wife.

The keynote speaker for the event is Tzigane Monda, another minister’s wife and mom to six children.

Cloyd said she chose Monda as the speaker at God’s leading, feeling “she would be a perfect fit.” Cloyd described Monda as a minister’s wife whose life is overflowing with abundance. “Tzigane’s a busy woman with several children, from toddlers to a daughter who is in her 20’s. She serves in many roles, both locally and in the state. I knew life wasn’t always easy, but she always had a can-do spirit and the joy of the Lord.”

Monda was modest when asked about herself, but she described an overflowing similar to the meeting theme. “I can say that ever since I was little and before ever having a relationship with Christ, I’ve really only ever wanted to be a mom and wife. I am so thankful that God has fulfilled the desire that placed in me.”

She admitted the kids “keep us busy, that’s for sure.”

She and husband, Josh, have been married 25 years. In that time, she has served alongside him as he pastored churches in Illinois, Missouri, and Pennsylvania.

Cloyd said it is her “hope and prayer ministers’ wives will attend the luncheon to learn from the Lord, to fellowship with one another, and to meet friends and make new friends.”

She said the luncheon will begin with a time of fellowship and “overflowing cups of our favorite beverages.” Cloyd also promised a “delicious lunch and some swag, too.”

The best part she said, is “we will go away knowing that we are not alone in ministry. There are other ministers’ wives who are also wanting an abundance of God’s overflowing joy in ministry.”

The cost to attend the luncheon is $20 per person. Participants may register and pay by debit or credit card at IBSAannualmeeting.org/registration. Or, checks may be made payable to Ministers Wives Fellowship and mailed to:
Treasurer Melissa Carruthers
324 Sandusky Street
Jacksonville, IL 62650