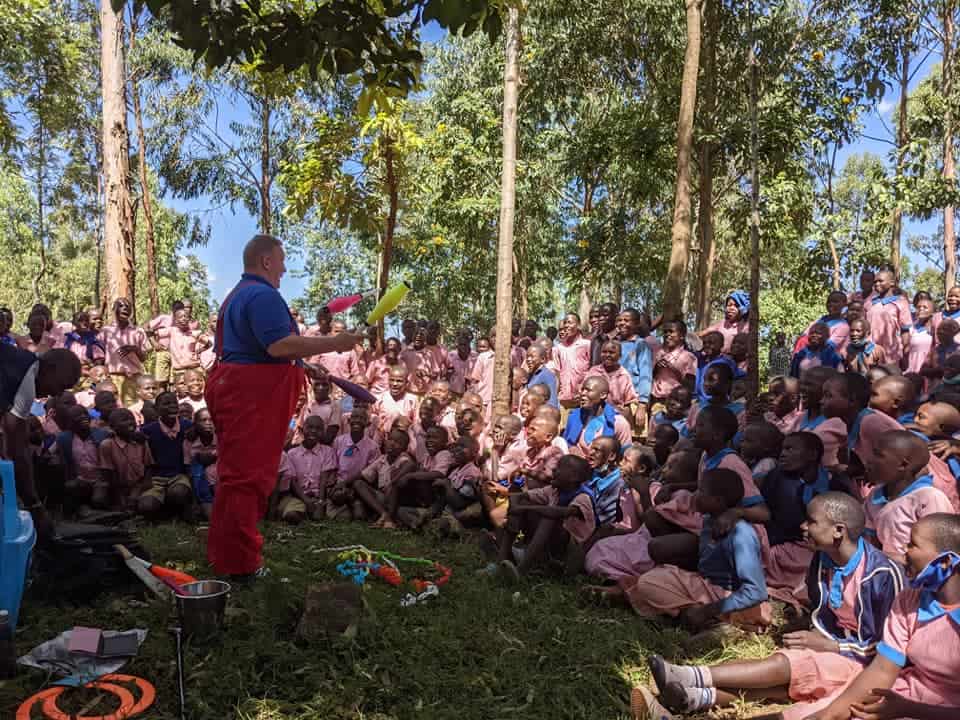 Ken Schultz hadn’t performed in nearly a year when he dusted off his suspenders for a mission trip to Africa. The pastor of Crosswinds Church in Plainfield and long-time entertainer recently traveled to Kenya with a mission team to share the gospel with schoolkids. Schultz wowed the crowd with juggling feats and sleight of hand while also telling stories from the Bible.

His team included several members of his church, including a couple that facilitates ministry in several African countries. The team had planned to go to Kenya in 2020, but the trip was postponed during the COVID-19 pandemic.

“There’s very much an openness to the gospel in Kenya,” he said. On the March trip, Schultz performed a 40-minute set for 10 different school groups. During the opening juggling bit, there was no language barrier, the pastor said, and the kids ate it up. He moved into a gospel presentation, juggling and performing various tricks to portray several parables from Luke 15. With the help of a translator, Schultz talked about lost sheep, lost coins, and a lost son. At the end, students were invited to accept Jesus.

Before their trip, Crosswinds volunteers had also collected yarn donated by local churches to be made into blankets and other handcrafts by widows in Kenya. “We took down as much as we could carry,” Schultz said, “huge duffel bags full of yarn and took that to the widows, who promptly starting crocheting it.”

The team also made daily visits to an orphanage run by Hands On Africa, the ministry they worked with while in Kenya. One young boy living there was very sick, Schultz said, and the team prayed fervently for him. By the end of the trip, he was much better. It’s not often a mission team sees the influence they have on people they serve, Schultz said. “We really saw a dramatic change in him.” 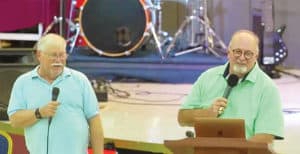 Across the Atlantic, Bob and Carol Evaul also traveled on a mission trip several months after they were originally scheduled to go. The southern Illinois couple had canceled a trip to Bolivia planned for last August. But in February, they returned to the country where they spent 18 years as missionaries. Bob ministered to Bolivian pastors by translating training led by Illinois Baptist volunteers. Carol worked with pastors’ wives and taught on dealing with difficulty and loss.

Like many churches in Illinois, Bob said, churches in Bolivia are seeking revitalization and renewal. Working toward that goal, IBSA Revitalization Director Scott Foshie met for six weeks over Zoom with a cohort of Bolivian pastors prior to the team’s trip to the country. Once there, Foshie facilitated training sessions attended by around 100 pastors gathered in person or online. Wes Hahn, pastor of Shiloh Baptist Church in Bridgeport, trained the pastors in discipleship.

Like countries all over the world, Bolivia has felt the effects of the pandemic. But the nation is also starting to recover, the Evauls said. They’re planning to send another team of Illinois Baptists to Bolivia this summer.

“There were a lot of tears because we had losses right in the room,” Carol said of her meetings with pastors’ wives. During one session, she led them in a painting project and taught about loss, death, and faith.

“I said, ‘This is your chance in this community to be a light,’” she recounted. “We don’t grieve the way people who don’t have faith grieve. We have a living hope.”

Photo at top: Pastor Ken Schultz entertained children in Kenya and shared Jesus’ parables during a mission trip to Kenya in March. Their trip to Kenya was postponed last year, but Schultz’s Crosswinds Church in Plainfield was finally able to send a volunteer team to the country this spring. Photo by Hands On Africa