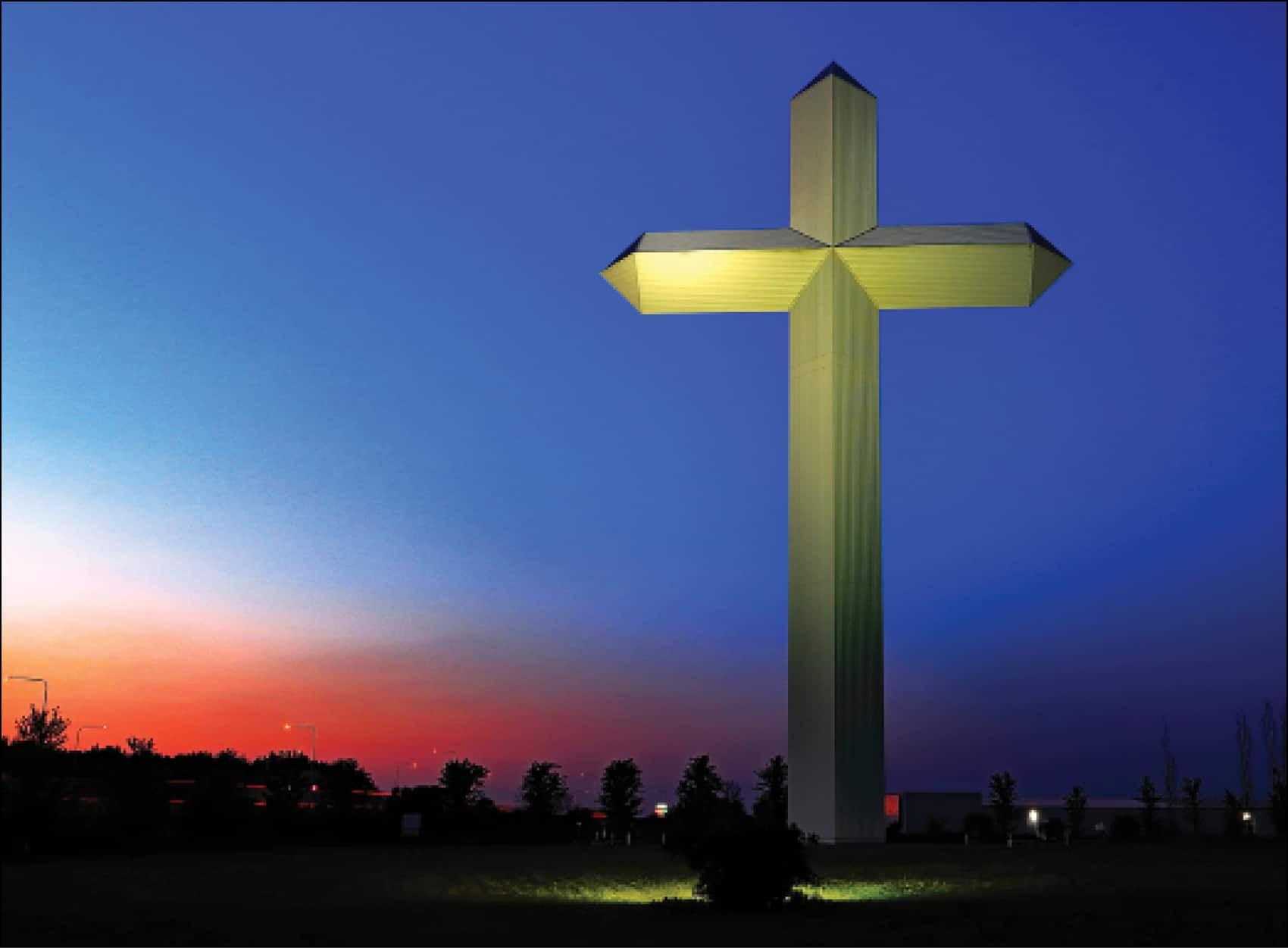 Rounding the bend where I-57 meets I-70 at Effingham, there rises on the east side of the highway the largest cross you may ever have seen. In fact, it’s the largest cross in the United States. Bud Althoff wanted it to be so.

The Effingham resident had seen a similar cross while passing through Groom, Texas, on vacation and wanted one in Illinois—a bigger one. It’s two feet taller at 198 feet, but under the 200-foot limit which would have required a red light on top to alert airplanes. Starting in 1998, Althoff secured acreage adjacent to the Interstate, created the Cross Foundation, and gave millions to build the massive monument (pictured above).

The Cross at the Crossroads is not without controversy. The usual cadre of atheists and First Amendment protestors have objected to the cross and to its depiction on artworks about Effingham. As recently as January 2020, a group threatened suit against the city because of the cross’s inclusion on a public mural of local sites. But the cross has popular support.

“Everybody knows about the cross,” county resident Clara Brown told a central Illinois television station. “You always know you’re at Effingham because there’s the big cross sitting out there….When you sit in the stadium and look at a football game, you see the cross anyway, and it’s just a natural part of the Effingham landscape.”

Bud Althoff died in 2016 at age 97, but the cross remains, just as he had hoped: a witness to the 20 million people who drive by it annually. The cross was erected just three months before the 2001 terrorist attacks. Since then, it has served as comfort in crisis. As a nearby billboard says, “In these trying times, a sign—God is in control.”

More than jewelry
When Jesus told his disciples that they would have to take up their cross daily if they wanted to follow him, the admonition must have sounded strange to them. None of them were criminals convicted of capital offenses. None of them would have considered himself worthy of execution. None of them had a clue their beloved rabbi was himself headed to such an ignominious death on a cross. And to be associated every day with that instrument of debasement would not only have been inconceivable, but offensive.

“What could Jesus mean by that?” they would have asked (as they often did). And in our time, the question echoes. Jesus wants me to “take up my cross,” but what does that mean, and how can I do it? Wouldn’t it be easier to erect a giant monument and let people debate it?

Easier, perhaps, but effective? How much greater is the witness of millions—each carrying his own cross to a world that desperately needs its message.

Carbondale pastor Phil Nelson took the call literally a few years ago. He journeyed to Chicago and walked across much of the city carrying a seven-foot cross. Nelson had a burden for the city, particularly as a southern Illinoisan reaching out to needful Chicago. People were open to him. The conversations were frequent and gospel-focused, as his intent was made obvious by the big wooden cross propped on his shoulder. There was no doubting what Pastor Phil was all about—he was there to talk about Jesus.

But for everyday Christians, our outgoing message may not be so evident—unless we do what Jesus said. And even more important, do what Jesus did.

“Adopt the same attitude as that of Christ Jesus,” Paul urges in Philippians 2,
“who, existing in the form of God,
did not consider equality with God
as something to be exploited.
Instead he emptied himself
by assuming the form of a servant,
taking on the likeness of humanity.
And when he had come as a man,
he humbled himself by becoming obedient
to the point of death—
even to death on a cross.”

To take up your cross means first to assume a lifestyle of humility. Identifying with the cross requires that we intentionally adopt the stance of the lowly in our society. From ministry among sinners and publicans, Jesus took further steps downward and let himself be marked by the device that defined the vilest criminals.

And he did so willingly. The God-Man did not clutch at his rights to throne and exaltation and worship. He got down in the mire with his own creation, we who are made from dirt. He subjected himself to this degradation that we might be saved from our own degradation. That is what the cross on a gold chain means. Its wearer is descending to the lowest place to help the lowest people.

To take up the cross means to embrace the symbolism of sacrifice. Jesus was about his father’s business and his holy mission at all conceivable cost to himself. How many of his followers can honestly say we have surrendered everything in order to become a sacrifice for the sake of others? Yet, that’s what the cross represents.

“When Christ calls a man, he bids him come and die,” theologian and martyr Dietrich Bonhoeffer said, describing not the end of the cross-defined life, but its beginning. To choose to follow Christ is the choice to lay down everything else. But our age is not one of self-denial. Quite the opposite, we live in the era of self and our culture worships at the temple etched overhead with its own name.

Following Jesus instantly puts us at odds with the values of our time. We may not dress like Old Order Amish or segregate ourselves like Hassidic Jews, but faithful followers of Christ will be just as out of step with the world as the more obviously religious. Carrying the cross has that effect.

Without the cross, there is no hope for lost humanity. As cross bearers, our message is the clarion call to salvation in Jesus Christ. It is not our own message. It brings us no followers. It brings us no personal glory. Choosing to shoulder the cross means bringing the gospel message for the remainder of our lives, at the cost of personal achievement, applause, or pleasure. Taking up the cross changes what we are about—day in and day out—both at the core of our being and at the extent of our reach.

We are not allowed to take up the cross one day and prop it in the corner the next, when humility, sacrifice, witness, and surrender seem too much to ask. Every day, every morning, the call remains. If you want to follow Jesus, that’s the requirement.

Take up your cross. Do it again. Do it today.

And do it wherever it leads.

Jesus’ cross led him down the Via Dolorosa, the way of suffering, to the killing ground outside of town. The GPS of his cross is set to Calvary, and Calvary is the place of death. The disciples did not know that when Jesus issued the call to follow him as carriers of the cross. It would be made plain in great spatters of blood on a dark Friday just before Passover when Jesus became the lamb of sacrifice John the Baptist had declared him to be three years earlier. And for his circle of followers, identifying with the cross of Christ would result in their own deaths—for all but one, martyrdom after years as itinerant missionaries, preachers, church planters, and founders of the Christian faith.

Put simply
Songwriter B. B. McKinney was at dinner with a missionary friend of his in 1936. At the time, McKinney was the leader of the music department for the Alabama Baptist convention. He was leading the worship sessions at a statewide meeting, and his friend was the speaker.

The missionary had learned that he would not be returning to Brazil where he had served because of health problems. As he told the story at the table, McKinney asked about his plans. “I don’t know,” the missionary said, “but wherever he leads, I’ll go.”

By the time of the evening session, McKinney had turned this simple declaration into a song. McKinney linked these twin concepts of taking up the cross and following the Lord’s leadership, just as Jesus had said. That night he led the congregation in all four verses with music and a chorus: