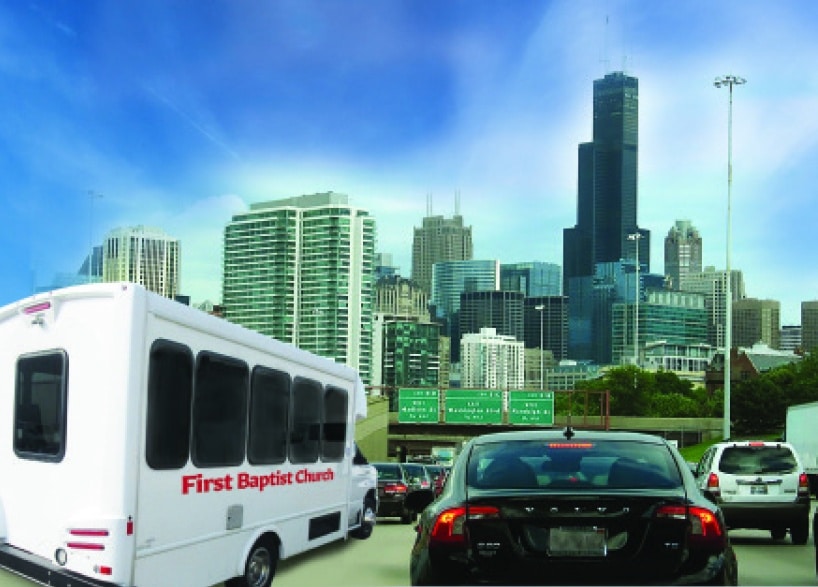 “I remember attending an IBSA Annual Meeting several years ago in Chicago,” Sammy Simmons said. “After the meeting I took a small vision tour that afternoon with a church planter catalyst…. That vision tour touched my heart for the struggles of our church plants and the need for more churches in Illinois’ largest city.”

At the time, Simmons was pastor of Immanuel Baptist Church of Benton. He began exploring ways to help support church planting work in Chicagoland. Today Simmons lives in metro Atlanta. He is National Project Coordinator for Send Relief, a joint ministry of Southern Baptists’ North American Mission Board (NAMB) and International Mission Board (IMB).

Scroll down to read, “Five ready fields: Plan your church’s missions for 2023 & beyond”

And right now, he’s neck deep in plans to bring the Send Relief Serve Tour, the SBC’s newest hands-on mission venture, to northern Illinois. “Our heart is to partner with IBSA, Chicagoland Association, and local pastors in a way that blesses residents of Chicago” through compassion ministry of volunteer mission teams, the NAMB missionary said.

“We would love to have every Illinois church say, ‘Let’s go!’” said IBSA Missions Director Shannon Ford. Together with a coalition of Chicago leaders on the ground led by project manager and church planter “Q” Mahmud of Reborn Ministries, the mission partners are organizing the August 4-5 event that will target multiple hands-on projects. The Serve Tour will start at one of four hub locations in Chicago and disperse across the area. The goal is to open doors and to create partnerships in places where Southern Baptists have struggled to keep a foothold.

“We hope the timing of the event—before school starts—will allow people to use some of their summer vacation to come to the city and make an impact for the gospel,” Ford said.

The key to this event is involvement of churches from across Illinois and the U.S.

“If I’m honest, I was hopeful Chicago could be included in the cities chosen last year. I am very excited to partner with IBSA for Serve Chicago for 2023,” Simmons said. “I am hopeful that many churches in Southern and Central Illinois come alongside their brothers and sisters in Chicago to serve the city and shine the light of the gospel together.”

Chicago is “an important city for the gospel,” Simmons said. “You literally can reach the nations right in Chicago.”

And it’s an important opportunity for partnership among Southern Baptists in Illinois. “IBSA, NAMB, and the local association are synergizing in new ways,” said Nathan Carter, who assumed leadership of a church plant 18 years ago. In 2022 he added Chicagoland Baptist Associational Mission Strategist to his responsibilities. “This Serve Tour will help us keep the momentum going forward as it brings churches together around a common goal and opens up more doors for the gospel here,” Carter said.

So far, more than 750 people from 40 churches have expressed interest in coming to Chicago in August. Simmons has seen strong partnerships develop from the interaction between churches and the teams of volunteers who come to serve with them.

In Memphis, for example, partnerships were intentionally across racial lines. A project leader from suburban megachurch Bellevue connected his groups with an inner-city congregation. Participants “paired up with another person from the other group to spend time in prayer and service together,” he reported. “They wanted to show the love and reconciliation of Christ tangibly.”

For those who are reached by the service projects, the ministry can be lifechanging. The 2022 Serve Tours blessed 17,000 people directly and reported 363 salvations. The 2023 slate includes eight cities, with focus on northern and international destinations. Chicago and Philadelphia join New Orleans, Owensboro (KY), and Montgomery (AL), along with Athens (Greece), Nairobi (Kenya), and Bangkok (Thailand).

As a former pastor in Southern Illinois, Simmons was candid about the challenge a mission trip to Chicago represents for some people. Simmons said he hopes participants “will put aside their politics and fears” for the sake of the gospel.

“I believe that we are at our finest when we partner together to meet needs, share the gospel, and see lives changed,” Simmons said.

Leaders from interested churches can complete early access registration at servetour.org. Look for the box marked “Chicago.” Hotel recommendations will be sent to those churches in mid-spring, Simmons said, along with cheaper housing options. On June 19, registration will open for churches and individuals to pick their exact projects based on their skillsets and passions.