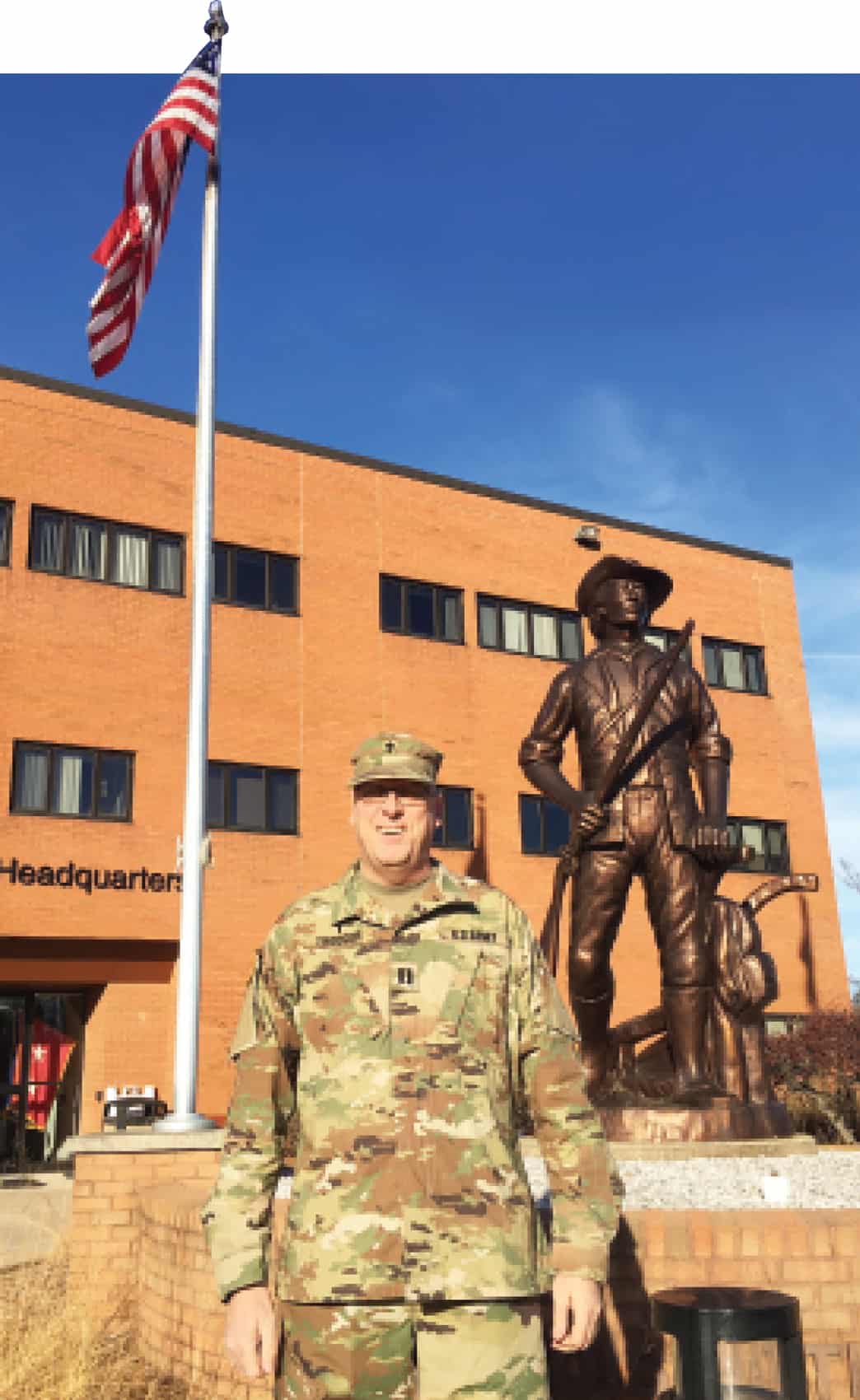 Pastor Kip Troeger and his church are in uncharted territory. They’re also on different continents.

Troeger, a chaplain with the Army National Guard, deploys this month for a year of service in Afghanistan. Many pastor/chaplains called to long deployments resign from their churches. Troeger’s church, First Baptist in Riverton, fully expects him to return as pastor after his time in Afghanistan.

“Why wouldn’t we?” is deacon Mark Barber’s simple response to how the church decided to keep Troeger as pastor. The congregation will be led by a long-term intentional interim pastor until Troeger is back in Illinois. “Pastor Kip’s going to be deployed,” Barber said, “but we’re deployed to do various things here in the community to build the church.”

Troeger’s church commissioned him as a missionary Jan. 5, praying over him and his wife, Barb. The chaplain gets emotional at the memory of the send-off. “I think we’re both on this parallel journey, both going towards the Lord,” Troeger said of himself and his church. “And when we do get the chance for a reunion, they’re going to reap the benefits of having a pastor on the mission field for a year. And I’m going reap the benefits of new growth and leadership and direction under the interim pastor’s leadership.

“I think it’s going to be a really powerful thing for both of us.”

(In the interest of full disclosure, we should say that Troeger’s wife, Barb, is executive administrative assistant with IBSA, and the interim pastor will be Eric Reed, editor of the Illinois Baptist. “We are so impressed with Kip’s service as a military chaplain and bivocational pastor, and the church’s commitment to his ministry through the military, that we would have shared their story here even if we didn’t have direct connections to it,” Reed said. “Being ‘deployed’ is a model for us all.”)

Boots on the ground
The Troegers both say Kip’s military career has been orchestrated by God from the beginning. He had long sensed a call to ministry, Barb said, and the couple served in children’s ministry in their home state of Wisconsin as well as at Living Faith Baptist Church in Sherman.

He had already passed the traditional age cutoff when he began pursuing a career in the Army. But he felt called, and God opened doors, the Troegers said. Troeger was inducted into the National Guard Chaplain Corps in 2013 and endorsed as a chaplain by the SBC’s North American Mission Board. Then in 2017, he also became pastor in Riverton.

Over the years, Troeger has volunteered for deployments that didn’t work out. “The minute I finally said, ‘OK Lord, whatever,’ this one came through,” he said of his current assignment. And with an added bonus: he will deploy with soldiers from the unit he has served with for almost three years.

After a January departure, he’ll spend time training at Ft. Bliss in Texas. Some of his training will be alongside the soldiers in his unit, but Troeger will also have a chaplain-specific list of tasks to check off, including counseling techniques, sermon preparation, and running a chapel.
Once in Afghanistan, he’ll facilitate services, counsel soldiers, and provide much-needed spiritual support. Soldiers face the same life issues as civilians, but separation can make things more difficult. “The military is a huge mission field,” Barb said. “I’m hoping God’s going to use him in a mighty way. We’re praying for baptisms. We’re praying for lots of salvations.”

Chaplain Troeger sees his deployment as a missions assignment to share the truth of Jesus Christ. “My ultimate goal is to share the gospel. If you can keep one guy out of hell…” Troeger’s voice trails off as he chokes up.

He won’t carry a weapon in Afghanistan (no chaplains do), but he will be assigned a chaplain’s assistant who would take control in a combat situation. Troeger said the prospect of combat isn’t frightening because of his eternal perspective. “If you really buy into the one hundred percent lordship of Jesus Christ—it’s his show and it’s his game—all of a sudden, the prospect of maybe getting killed isn’t a scary thing.”

During his time away, the church in Riverton will be praying for their pastor—both “wholesale” prayers for protection, Barber said, and for specific needs. His two years pastoring the church have prepared him for this new venture, Troeger said. He’s had experience working with different groups of people. His computer holds two years of sermons.

“I can look back and see how God worked all this out. Before my experience as a pastor, I don’t think I would have been nearly as prepared as I am now,” Troeger said.

“I think in the Lord’s perfect plan, he did that intentionally.”