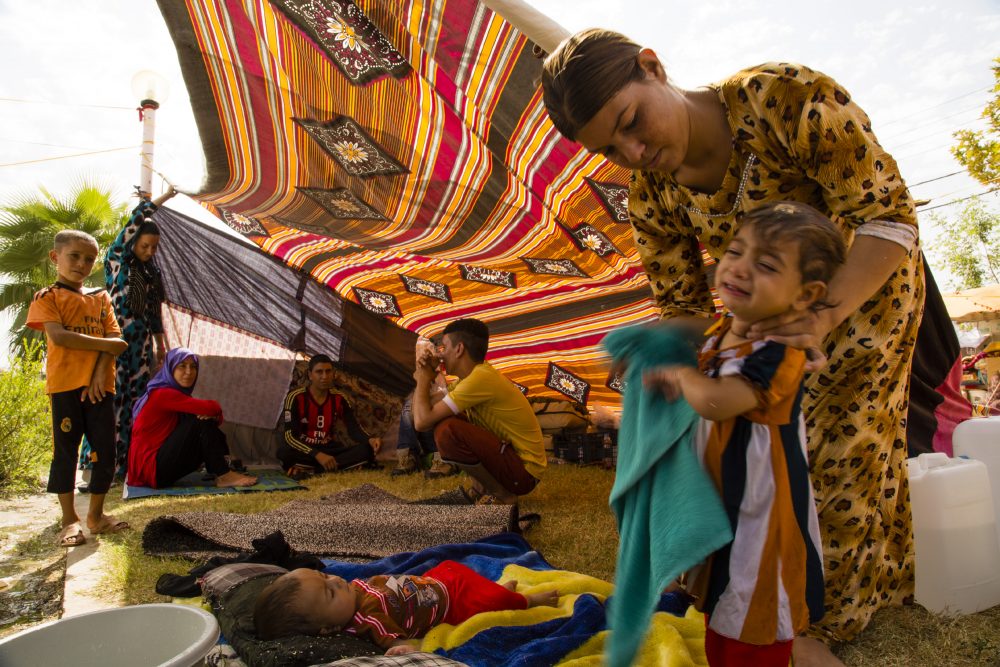 A camp of more than 500 Yazidi Kurds in a city in northern Iraq. A woman washes off a sick toddler, who had just thrown up. (IMB photo by Joseph Rose)

St. Louis | Phil Nelson, pastor of Lakeland Baptist Church in Carbondale, came to the 2016 Southern Baptist Convention in St. Louis and brought with him three young men from his church, Dalton Sharrow, Sean Morecraft, and Brandon McNeely. Of all the actions the messengers considered, it was Resolution 12 on assisting refugees that caught their attention.

“We saw the resolutions and we saw what’s going on with the Confederate flag and some others, and we thought that’s awesome the walls have come down,” Nelson said, “but we need to communicate to the world outside the ports of America that when our government and society is saying, ‘No, don’t come,’ we represent a different Kingdom.”

Together, the four wrote and proposed an amendment to further strengthen the resolution. Their amendment encouraged “Southern Baptist churches and families to welcome and adopt refugees into their churches and homes as a means to demonstrate to the nations that our God longs for every tribe, tongue, and nation to be welcomed at His Throne…”

According to the resolution, the world is currently experiencing its largest refugee crisis since WWII with more than 60 million people displaced. The majority of these refugees come from the Middle East and Africa and are Muslim. The movement of more than 350,000 Syrians into Europe has been especially problematic.

President Barack Obama pledged to bring 85,000 refugees to the United States last September, with 10,000 coming from Syria. Some Southern Baptists spoke to the migration at the time, but couldn’t take up the issue as a body until the annual meeting held in June.

“Resolution 12: On Refugee Ministry” acknowledged the suffering refugees endure and Baptists’ historical role in refugee care, calling upon Baptists to “minister care, compassion, and the Gospel to refugees who come to the United States.”

The resolution also called on the government to “implement the strictest security measures possible in the refugee screening and selection process.”

Refugee care is already part of missions-minded ministry in some churches. Members of Johnson Ferry Baptist Church in Marietta, Georgia, pastored by former SBC president Bryant Wright, have been hosting Syrian refugee families. “It was just so heartbreaking to see the humanitarian disaster that is occurring because of the war in Syria,” Wright told the Atlanta Journal-Constitution. “Knowing the United States was going to be taking on more Syrian refugees, we just wanted to be stepping up to minister with the love of Christ to these folks who have often lost everything.”

Shortly after the amended resolution was approved, Nelson told the Illinois Baptist, “Our citizenship is in a different place. We want to communicate clearly we belong to a different Kingdom. It’s not an American Kingdom, it’s the Kingdom of God.  We want to tell all those who are orphans and refugees, you’re welcome here. I don’t care what religion, what background, you’re welcome because we believe the gospel can rescue and save everyone.

“When we first heard David Platt give his story about the refugee issues in Somalia and Syria and other places, I couldn’t stop weeping,” Nelson said, his voice breaking. “I started seeing the kids that had no place to go. All of a sudden I thought, we have 46,000 Southern Baptist churches, what would happen if each one of those churches said we’ll take a refugee. We’ll take a family.”

Nelson shared how another Southern Baptist pastor was part of their inspiration. As they were writing the amendment, a friend of Nelson’s who is originally from India stopped to say hello. The friend, now a pastor in South Carolina, “came over here in 1990 as a Hindu, had his gods in a suitcase.”

“A Baptist family that adopted him,” Nelson explained, “let him come and live with them, where he saw the gospel lived out, and as a result gave up his Hindu background, gave up his Hindu gods. Now he’s going back to India every year planting churches.

“I thought if we’re going to reach the nations, and we’re going to convince the world that the gospel is for everybody, we’ve got to set the standard and say, ‘Y’all come.’”