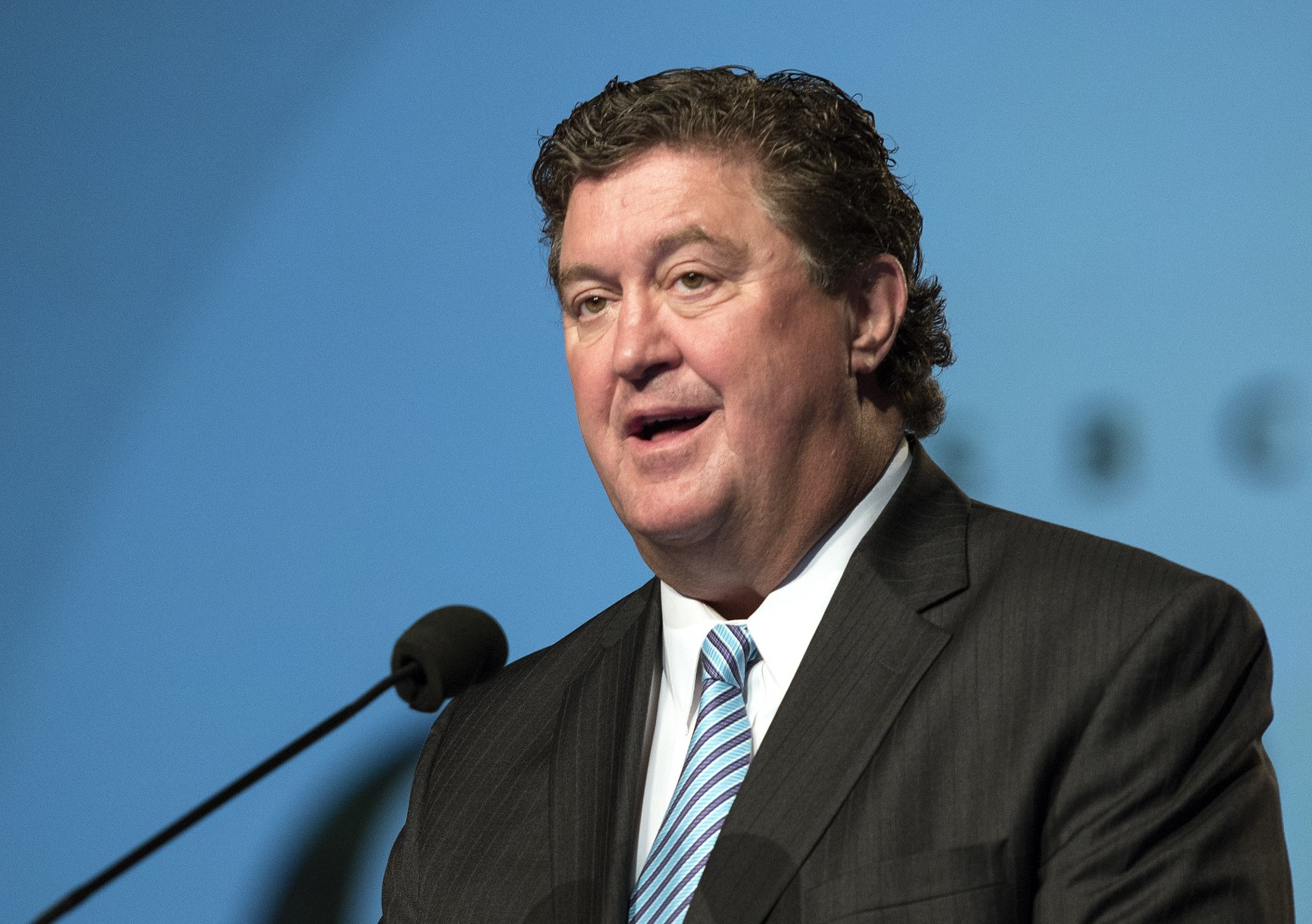 Steve Gaines, pastor of Bellevue Baptist Church in Cordova, Tenn., and chairman of the Committee on Resolutions, gives a report during the June 16 afternoon session of the Southern Baptist Convention annual meeting at the Greater Columbus Convention Center in Columbus, Ohio. Photo by Paul W. Lee

Memphis, Tenn. | Steve Gaines will preside over a convention that may take up several recent controversies in denominational life, including the perceived disconnect between the actions of the Ethics & Religious Liberty Commission and the views in the pews on the Trump candidacy. Or it may turn its attention to prayer.

Gaines is hoping for the latter.

The pastor of Memphis-area megachurch Bellevue is wrapping up his first one-year term as president of the Southern Baptist Convention. In an e-mail exchange with Kyle Gulledge, editor of the blog, SBC Today, Gaines said he has spent the past year preaching to the leaders of SBC entities and students and faculty of five of the six SBC seminaries. Here are excerpts of the interview.

Kyle Gulledge: What has been your biggest surprise about being President of the Southern Baptist Convention?

Steve Gaines: I am surprised that the Southern Baptist Convention can be so large and effective even though it is not a hierarchical, top-down organization. No national or state entity can tell any churches what to do. Yet we voluntarily choose to work together….

I am overwhelmed with all that the Lord is doing in and through Southern Baptists. Through NAMB, we are seeking to plant one hundred new churches every month in our largest cities across North America. The gospel will change countless lives as those new works are launched. I am also grateful that the IMB has become stronger fiscally, and that we are once again beginning to add to the number of full-time missionaries that we are sending oversees.

Gulledge: What is your greatest concern facing the Southern Baptist Convention?

Sometimes I think Christians in general in America are much more focused horizontally than vertically. We are often more focused on e-mails, texts, phone calls, and social media than we are on reading our Bible and talking with God in prayer.

If Southern Baptists would pray more, God would work in and through us more than he is currently.

Gulledge: Relating to the Calvinist/Traditionalist issue, do you think that the division will ever be bridged?

Gaines: Without question, Calvinism is increasing in the SBC. How will that affect the SBC in the years to come? I don’t know. I am not a Calvinist. I believe God loves everybody the same, Jesus died for everybody the same, and that anyone can be saved…. If someone hears the gospel and is not saved, it is because they chose to reject Christ, not because God chose not elect them to salvation.

Many Calvinists would have a problem with what I just said. Yet, I am convinced that what I just said represents the prevailing theological beliefs of the majority of Southern Baptist laypeople. Most Southern Baptists believe that Jesus died for all people and that anyone can choose to receive or reject Jesus as their Lord and Savior.

It certainly appears that the SBC will become more Calvinistic in the years ahead, but how long that trend will last is uncertain…. If Calvinistic soteriology becomes the predominant view taught at all of our seminaries, that would be a tragedy resulting in major division.

Gulledge: There seems to be a real issue with regard to SBC entity heads not responding to or being held accountable to the grass-roots, mom-and-pop Southern Baptist church members. How can that be fixed?

Gaines: If “the grass-roots, mom-and- pop Southern Baptist members” want their voice to be heard, they need to elect SBC presidents that will appoint SBC Committee on Committee members who will appoint people who share their convictions… That is the best way the common folk can be heard. Complaining after the fact regarding various Convention matters might resonate with some and stir a few emotions. But real change occurs only by electing an SBC president that represents a person’s theological viewpoint.

Gulledge: What is the one thing you would like for Southern Baptist historians to remember about you?

Gaines: The primary call of my life is prayer. I desire that the SBC will become a house of prayer. I pray that when people say “Southern Baptists,” the first thing that comes to their mind will be: “Those are the people that pray fervently, frequently, and in faith.” If we will pray, God will bless exponentially. But if we choose not to pray, God might move on to another group that makes prayer their priority.