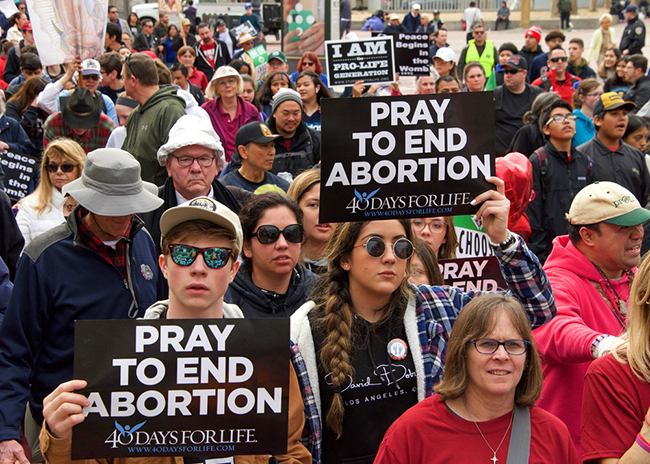 The May 2 leak of a draft U.S. Supreme Court decision in Dobbs v. Jackson that would overturn Roe v. Wade continues to reverberate across the country. In Illinois, a state where abortion has been codified into law, elected officials have reacted strongly even though abortion’s legality would remain the status quo. But pro-life leaders are pledging even stronger efforts to end abortion in Illinois.

“Our ultimate goal is to see abortion ended in Illinois,” said Molly Malone, assistant legislative chair at Illinois Right to Life. “I think it can be done and I think it’s only a matter of time until it is done.”

Malone bases this on her belief that Illinoisans “are realizing just how extreme this legislation is that they’ve [lawmakers] passed in the last few years.”

The morning after the draft was leaked, Illinois Governor J.B. Pritzker held a press conference on the possible reversal where he was joined by nearly 30 other Democrat members of the General Assembly.

Alluding to the state’s pro-abortion stance and using one the morning’s many mixed metaphors referring to the gloomy weather and light and darkness, Pritzker called Illinois “a beacon of hope in an increasingly dark world.”

Warning the Court could take away same-sex marriage and other LGBTQ+ “rights,” Pritzker declared he and the assembled lawmakers would fight not “just for the women of Illinois, but for every person in our state and every person across the nation who believes not in limiting civil rights and human rights, but in expanding them.”

Malone said she found their stance “ironic” when “nearly every piece of legislation they passed put women in danger.”

One piece she cited was the Reproductive Health Act enacted in 2019, which “removed abortion clinic licensing and inspection requirements.” Malone said it also “prohibited coroners from doing preliminary investigation if woman dies at abortions.”

Another was the repeal of the state’s last remaining pro-life law which will officially cease June 1. In December 2021, the governor signed the repeal of the Parental Notification of Abortion Act which required minor females to notify a parent or guardian prior to undergoing an abortion. Malone said the Parental Notification Act had helped provide protection to “minor girls who were victims of human trafficking.”

House Bill (HB) 1464 was an amendment to the Illinois Insurance Code to prohibit the revocation or suspension of the license of a nurse or physician in Illinois if another State suspended that license for a reason related to an abortion. While passed it in the House in March, it failed to move out of committee in the Senate but can be brought back in the fall session.

“It’s concerning,” said Malone, “that they would allow a doctor to come here and continue to practice even though they show a complete disregard for the law in their own state.”

Illinois House Speaker Emanuel “Chris” Welch took the microphone at Pritzker’s press conference to call the Court’s draft decision a threat to women and their fundamental right to privacy.

Speaking directly to the author of the draft decision, Speaker Welch said, “Justice [Samuel] Alito, Mother Nature is weeping! Because it’s raining hard! Today is dark day in history. …It’s a dark day, but the sun will shine again, because we will march.”

Some in the General Assembly see the state as an “abortion sanctuary” or “haven” and work with like-minded groups to further that aim. In 2020, 9,686 out-of-state women traveled to Illinois to terminate a pregnancy. That’s up 29% over the previous year. Over 36,000 women received an abortion in Illinois in 2020, 21% of those were from out-of-state. These numbers are expected to rise as more states strengthen their pro-life laws.

At the end of March, the Illinois House passed Resolution (HR) 790 declaring a commitment to abortion through “reproductive health” in Illinois. It condemned “the efforts of those in Illinois and in other states, including Missouri, Texas, and Florida” who would undermine those efforts. The three states named are among those that have some of the most pro-life laws in the nation.

Some point to public opinion polls and cite strong support for abortion with the voting public. But there is some ambiguity in those numbers. A Pew survey from May 2021 found 59% of Americans believe abortion “should be legal in all or most cases” while 39% think it should be illegal. However, 57% think abortion should be banned after 20 weeks’ gestation.

President Joe Biden released a statement calling a woman’s right to abortion “fundamental.” After almost 50 years, he said the “basic fairness and the stability of our law demand that it not be overturned.”

An estimated more than 63 million pre-born infants have been aborted in the U.S. since Roe v. Wade became law Jan. 22, 1973.

“My administration argued strongly before the Court in defense of Roe v. Wade,” Biden said. “We said that Roe is based on ‘a long line of precedent recognizing ‘the Fourteenth Amendment’s concept of personal liberty … against government interference with intensely personal decisions.’”

In February, the U.S. Senate failed to pass the Women’s Health Protection Act (WHPA), which would have codified abortion into federal law. It fell short of the 50 votes needed for passage and the needed 60 votes to overcome a filibuster. The WHPA passed in the House last fall.

Should the Court overturn Roe v. Wade, abortion would become illegal in 24 states, including nearby states Indiana, Kentucky, Michigan, Missouri, and Wisconsin.

Malone said she does “have great hope that the Court will officially overturn Roe” while knowing “our work in Illinois is just beginning because it will become ground zero.”