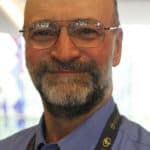 Illinois Baptist Messianic Jewish believer Ric Worshill is receiving prayer requests from those in danger as fighting continues between Israel and Hamas.

“Some of our friends and SBC missionaries over there actually had to leave,” Worshill said. “One of them left, with the neighbors upstairs, and just as they left the rockets started coming again. They’ll go back and they won’t know if their homes are there.”

Worshill, a Chicago-area police chaplain who serves as executive director of the 350-member Southern Baptist Messianic Fellowship (SBMF), is among many urging prayer.

“I’ve been getting emails asking for prayer,” Worshill said. “We need to be praying. As a people of prayer, we Southern Baptists need to be praying for the peace of Jerusalem and for the salvation of those who are not yet believers.”