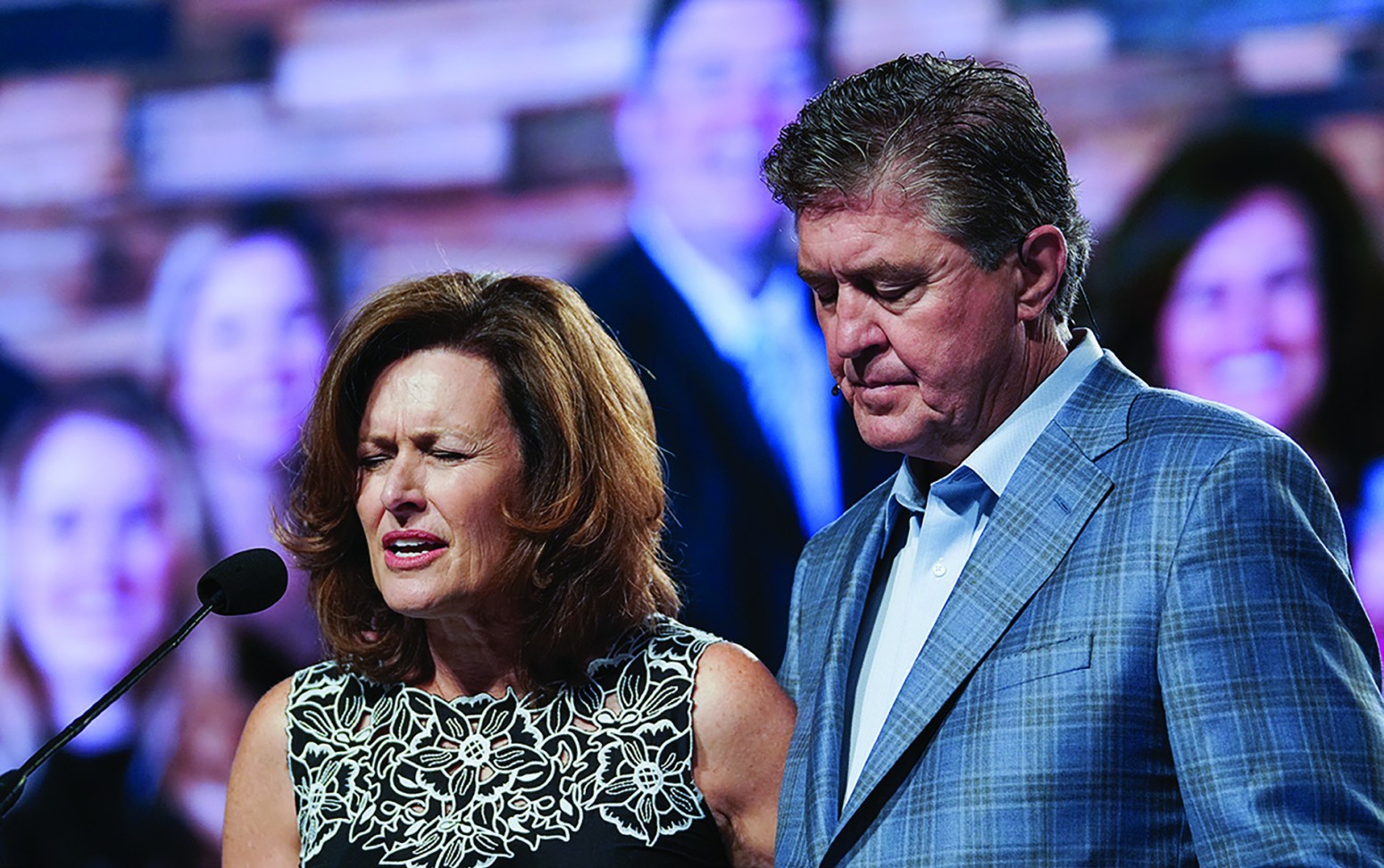 PRAYER TEAM – Donna Gaines prays fervently for her husband, SBC President Steve Gaines, just before he preaches during the opening session of the Annual Meeting. Gaines made prayer the focus of his first one-year term, and announced evangelism as the emphasis of his second term.

Phoenix | Debate over a resolution condemning “alt-right racism” took the spotlight, but lesser reported actions at the 2017 Southern Baptist Convention will address another serious issue facing the denomination, an ongoing decline in baptisms and membership. And a matter some anticipated would make headlines failed to produce debate, complaints against leadership of the SBC’s Ethics & Religious Liberty Commission.

SBC President Steve Gaines announced plans for a year-long study on evangelism in the denomination, and the presentation of a plan for more effective soul-winning by SBC churches and pastors. Gaines’ effort comes after another year of baptism declines and a decade of shrinking SBC church membership. (See story on page 4).

“I was not prompted by any man to get this done,” Gaines said in Phoenix, “but the Lord laid this on my heart to emphasize prayer last year, and to emphasize evangelism this year.”

The Memphis-area pastor, who was re-elected to a second one-year term, named 19 pastors, professors, and seminary presidents to a task force, which will bring recommendations at the 2018 convention in Dallas. Southwestern Seminary President Paige Patterson, a proponent of traditional personal evangelism, will chair the panel. And Illinois’ Doug Munton, pastor of First Baptist Church of O’Fallon will also serve.

Gaines asked North American Mission Board President Kevin Ezell to present the motion creating the task force. Ezell outlined the troubling situation among SBC churches: The SBC has seen a steady decline in baptisms since 1980; 80% of SBC churches baptized 9 or fewer people in the most recent report of Annual Church Profiles, 50% reported two or fewer baptisms, and 25% baptized no one.

“I don’t think any pastor in the room would say they don’t have a passion for the lost, but I do think there is a practice problem,” Ezell said.

After the Phoenix meeting, Gaines urged continued prayer for renewal in our churches. “We must make prayer, evangelism and discipleship the priorities of our lives. We must jettison our selfish agendas and focus on Christ’s Great Commission,” Gaines said.

An anticipated debate over the ERLC did not materialize at the convention. Leaders had worked since January to heal strained relations between ERLC President Russell Moore and some pastors who objected to his comments about candidate Donald Trump last year, and also to his stance on a controversial religious liberty case involving construction of a mosque in New Jersey.

Moore would not comment on recent published reports that characterized the conflict as unresolved, positioning it as a generational tug-of-war between older Southern Baptists and younger leaders new to their positions. One report also said the ERLC is having difficulty accessing the Trump administration. Southern Baptists have been represented by Texas pastors Robert Jeffress and Jack Graham at recent White House functions involving religious freedoms.

Moore told the Illinois Baptist at a news conference that he saw the annual meeting as a “family reunion” of people who together advance the gospel.

The ERLC report was the last item on the convention agenda, when attendance in the hall is usually low and time for questions is limited. One motion to defund the ERLC was ruled out of order, as the SBC budget had been approved early in the opening session.

Moore restated the ERLC’s commitment to represent Southern Baptists on issues of marriage and family, sanctity of life, and religious liberty. “We are committed to be the Paul Revere, going ahead, speaking to churches, speaking to the officials, speaking to the public square… speaking to the watching world with a different word,” Moore said.

Moore interviewed Chicago pastor Nathan Carter about his church’s lawsuit against the city, which has blocked their purchase of a building in the University District because of parking rules. (See story on page 9.)

‘Alt-right’ and other resolutions

Moore was at the table at a news conference on the first day of the convention, when the chair of the Resolutions Committee, former ERLC Vice President Barrett Duke explained why the panel did not bring the proposed resolution on racism and the alt-right supremacy movement to the floor for a vote. (See story on page 1.) Moore was reportedly involved in the late-night writing session that produced a new resolution on the issue. And he addressed the proposal as a messenger from the floor.

“Southern Baptists were right to speak clearly and definitely that ‘alt-right’ white nationalism is not just a sociological movement,” Moore later said, “but a work of the devil.”

The resolution “on the anti-gospel of alt-right white supremacy” urged messengers to “earnestly pray, both for those who advocate racist ideologies and those who are thereby deceived, that they may see their error through the light of the Gospel, repent of these hatreds, and come to know the peace and love of Christ through redeemed fellowship in the Kingdom of God, which is established from every nation, tribe, people, and language.”

The resolution urged messengers to pray “that God will help us and all our fellow citizens to embrace the biblical moral values that will honor our creation in God’s image and bring God’s blessing on our nation.”

Ten resolutions in all were passed.

The Executive Committee brought a $192-million Cooperative Program allocation budget for next year. Messengers approved it. They also granted permission for the EC to sell its current building in downtown Nashville, should they receive a good offer. A building boom in the city has made the property very valuable, as was the case with the massive LifeWay publisher’s facilities which were sold last year in order to downsize. Proceeds after relocation would go to missions, EC President and CEO Frank Page said.

Another motion brought more Midwest representation to the Executive Committee. Four regions were given representation, even though they have too few church members to apply under the provisions of SBC Bylaw 30. The recommendation amended Bylaw 18 to list the Dakotas, Iowa, Minnesota-Wisconsin and Montana conventions as each being entitled to a single EC representative.

With this Annual Meeting, Illinois representative Wilma Booth completed two four-year terms on the EC. She will be succeeded by Adron Robinson, pastor of Hillcrest Baptist Church in Country Club Hills. And Sharon Carty, member of Emmanuel Baptist Church in Carlinville, will replace Charles Boling of Marion.