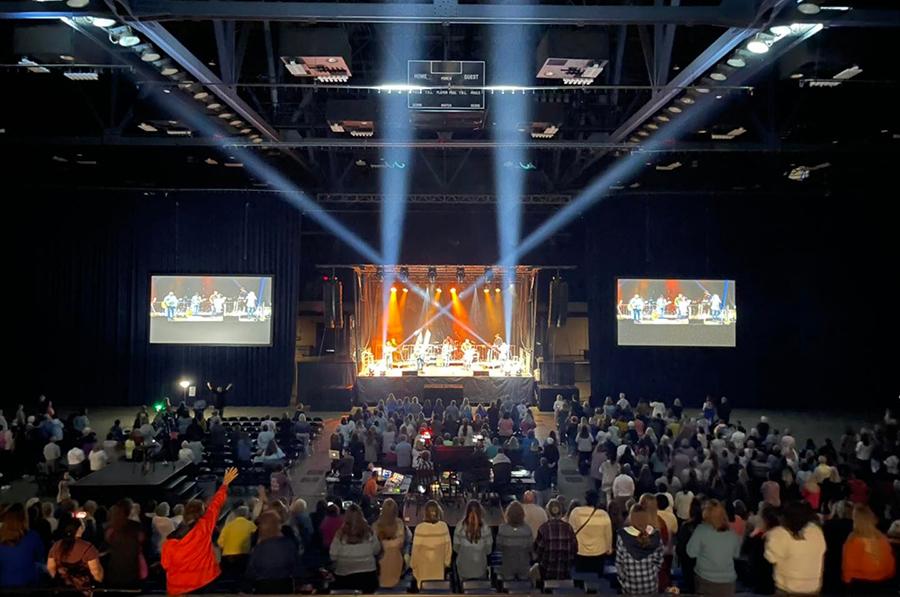 Almost 500 women gathered for the opening workshop sessions at the annual Priority Women’s Conference at the Bank of Springfield Center April 29-30. In addition, women in 28 churches attended online streaming of the general sessions Friday night and Saturday.

“There’s a wonderful spirit from the women who are here,” said lead organizer Carmen Halsey. “I’m hearing their excitement about being here, about the workshops, and about the opportunities for equipping for ministry and discipleship when they get home.”

Halsey is one of IBSA’s Leadership Development Directors. She developed the multi-site approach to the annual women’s conference during the pandemic. This year, there were 50 workshops in ten tracks, including a first-time track for writers. The keynote speakers in three general sessions were spiritual leadership expert Richard Blackaby, leadership coach Kim Hardy, and storyteller Kimberly Sowell. They spoke on the theme “transforming grace.” Praise in the plenary sessions was led by the worship team from First Baptist Church of O’Fallon.

Much of the buzz on the first day was in the exhibit hall, anchored by a Lifeway pop-up store and about two dozen ministry exhibitors and partners. The room smelled of salted caramel popcorn. And women representing churches from Chicago to Carmi chatted in small groups between breakout conferences.

“I definitely have found my tribe,” said Ruth Billings of Net Church in Staunton. “I learned of Priority through my church, but I saw the info on the writer’s workshop only last night. God called me here.”

Tracy Munoz attended with women from a friend’s church, First Baptist Church Royalton. “I came last year for the first time with my friend’s church. I loved it and wanted to come again.” 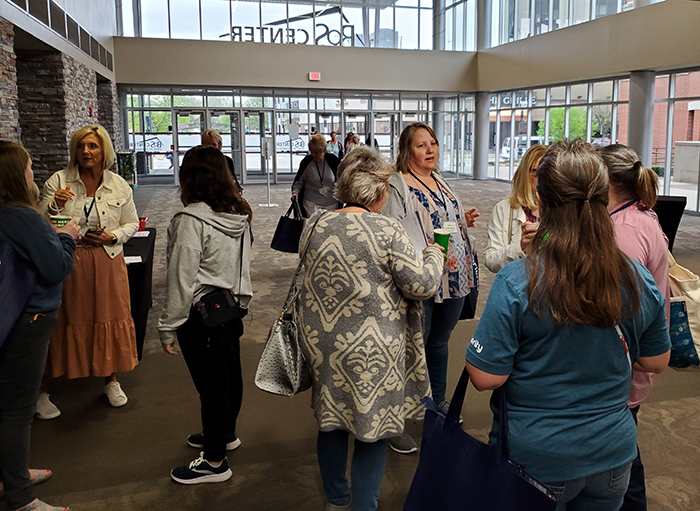 Women gather in the Bank of Springfield Center before the start of Priority 2022.

Kim Hardy on grace after failure

Hardy, an author, speaker, and leadership coach, kicked off the worship sessions with a message on grace. “It’s Gods unmerited favor,” she said. “We couldn’t earn it, we didn’t deserve it, but God still gave it to us.”

She recalled her first experience with grace as a 12-year-old when she answered a knock at the door of her family home. Three women and one man from a local church stood outside the door and one of the women said they had come to share some good news. Her mother said to invite them in, and they both became Christians that night. However, she and her mother didn’t stay in church, so they weren’t discipled.

As she grew, Hardy said she “created her own script for her life” which included her own picture of success. She got married and her husband was called into ministry, went to seminary, and became a pastor. Hardy received the invitation to her 10-year class reunion and realized her life hadn’t gone according to the script she’d written. “I’ve got six-months to do this,” Hardy said. Her husband supported her as she started her own business, but within a few years her business started to fail, she ran up credit card debt, and even owed $5,000 to check cashing businesses. It all came to a head when the bookkeeper of their church, called her husband—the pastor—to tell him his tithe check had bounced. “He was an accountant before became a pastor,” Hardy said.

He was in a state of disbelief and went to bank. Then he went home to wait for her. “I’ve never seen my husband so broken,” said Hardy.

“They were going to take me to jail because I couldn’t pay back $5,000 to check cashing places… I’m thinking what kind of pastor’s wife does this?” Her husband took a job delivering phone books to earn extra to keep her from going to jail.

At that point Hardy said she was functionally depressed and “so far from God that she was going to end it.” She told God her life was ruined, “I can’t do anything for you.”

But God reminded her of his promise in Philippians 4:13, “I can do all things through Christ.”

She still held out hope that God might somehow salvage her business, but as she was driving down the interstate her business van caught fire. As she sat by the side of the road crying, someone asked why she was crying. “You’ve got insurance don’t you?”

“Certain things in your life are going to have to burn up,” she said, “before God can do what he wants to do.”

Then Hardy cautioned, “Satan wants to take away your impact. He wants you to be so concerned about what people think about you, that you don’t do what you’re supposed to do.”

Blackaby, author and president of Blackaby Ministries, taught on the seasons of life. Far from occurring just once in our lives, he said “the seasons come and go.” Referencing Ecclesiastes 3:1, Blackaby said we must learn to live our lives “where you embrace your life as seasons come.”

He told the story of a 66-year-old woman, Nell, who had never shared Christ with anyone. Left unable to walk after a car accident and soon widowed, she sensed God telling her he wanted to “start something new in her life.” Soon, she began attending evangelistic witnessing classes taught by her pastor. The first person she shared Christ with was a 15-year-old girl.

Nell told Blackaby she was so nervous she left some things out and shared some of the Bible verses out of order. But it didn’t matter, God honored what she shared, and the teen accepted Christ! When Blackaby visited Nell 14 years later, she showed him the journal where she recorded the names of the people she witnessed to who then accepted Christ. There were 3,147 names in Nell’s journal. “Spring comes in the life of seniors,” Blackaby said.

No matter your age he told the ladies gathered, “You may be wondering if God’s got anything more for you. He always does. Handle this season well to prepare for the next season.”

Kimberly Sowell on the worship test

Sowell, head of Kingdom Heart Ministries, wrapped up the conference Saturday afternoon by inviting attendees to “revisit when you knew you were in love with Jesus” based on 1 Kings 18:20-40.

Elijah had called on the people to choose if the Lord is God or Baal.  “It is beautiful, strategic, and purposeful that this test of ‘who is God’ is a test of worship,” said Sowell. “If God receives this worship, we can know he is still God.”

“It is beautiful, strategic, and purposeful that this test of ‘who is God’ is a test of worship,” she said. “If God receives this worship, we can know he is still God.”

After witnessing that miracle, the people abandoned their false gods to run to Yahweh, the true God. “If you’ve met God, you know who he is and you know he’s faithful,” Sowell said. “They have revisited their first love and God is real to them once again.”

Priority is produced each spring by the Illinois Baptist State Association. Next year’s conference is scheduled to take place April 28-29.