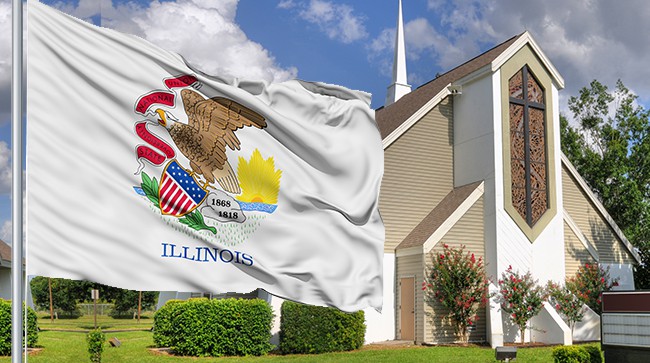 Gov. J.B. Pritzker said gatherings of 10 people or fewer are still recommended for churches. But as the state moves into phase 3 of the reopening plan, congregations have recommended guidelines to follow, rather than restrictions.

Speaking one day after multiple media outlets reported looser guidelines for Illinois churches, Pritzker encouraged faith leaders to follow new guidelines designed to keep parishioners safe and healthy. At his daily press briefing May 29, Pritzker was asked if he “caved” by relaxing restrictions on religious gatherings.

“From the very beginning, I have said the most important thing that houses of worship can do and faith leaders can do is to keep their parishioners safe,” Pritzker said, “and that’s why we put out guidelines even in phase 3, recommending to people that they have services that are either online, or drive-up services, or in groups of 10 or less, because that’s the safety guidelines that have been recommended by the experts.

“And all along I have followed that science, those recommendations, and I would recommend that every faith leader do that.”

During his press briefing May 28, Pritzker had announced the new guidelines for churches, framing them as guidance, rather than mandatory restrictions. Under the previous stay-at-home order, church gatherings were limited to 10 people or fewer. The new guidelines encourage the same limit, stating that “the safest course of action is to congregate outdoors and/or in small groups of less than 10 people.”

“Where the 10-person limit cannot be followed in places of worship,” the guidelines recommend churches “set a capacity limit for the place of worship that allows for extensive social distancing (six feet or more) between congregants. Consider limiting attendance to 25% of building capacity or a maximum of 100 attendees, whichever is lower.”

Throughout the afternoon and evening May 28, several media outlets reported the restrictions on churches had been lifted, quoting Capitol News Service. Later, the Chicago Tribune reported on the state’s response to an appeal to the U.S. Supreme Court from two churches seeking emergency relief from Pritzker’s order. “In its Supreme Court filing,” the Tribune reported, “the state argues that the churches’ request is moot because Pritzker ‘has announced that after that date religious gatherings will no longer be subject to mandatory restrictions.’”

Pritzker was asked May 29 if the new guidelines were in response to the lawsuit. He noted industry-by-industry guidelines the administration has put forth in phase 3, as well as guidance for outdoor activities. The guidance for houses of worship, he said, “wouldn’t be as comprehensive as it was if it was just something that was done on the fly.”

Pritzker’s statements May 28 and 29 were welcomed by some as freedom to worship, with many churches planning to open soon. A survey of IBSA pastors conducted in May showed 55% plan to reopen in June or July. The Diocese of Springfield announced public masses can begin as soon as June 6, at 25% capacity.

The apparent shift on Illinois church gatherings came almost a week after U.S. President Donald Trump declared churches are essential and urged them to reopen for worship immediately. Additionally, multiple churches launched legal challenges to the previous stay-at-home order, including the two Chicago churches that appealed to the U.S. Supreme Court.

Under the state’s “Restore Illinois” reopening plan, all regions of the state moved into phase 3 May 29 with Pritzker’s new executive order.

Other guidance for churches holding in-person services includes multiple small services instead of one large gathering, and considering details like how attenders will enter and exit the building. The guidance also encourages churches to avoid what it calls the “riskiest activities,” including singing, food and beverages, and person-to-person contact, like handshakes or hugs. Face coverings, temperature screenings, and pre-packaged communion servings are among the many precautions encouraged in the guidelines.

The Illinois Baptist State Association held the second of two May town hall meetings shortly after the new guidelines were announced. As five pastor panelists from across the state shared their reopening plans, it was clear that geography plays a key role in the process. In hard-hit Chicago, for example, Pastor Ron Gray and Connection Community Church don’t yet have a definite reopening date. “We want to err on the side of extreme caution,” said Gray. “I want to get back more than anyone else, but I’m more concerned about our safety.”

In other parts of the state with vastly fewer cases of COVID-19, though, churches are already meeting in-person or preparing to do so in the next few weeks. Pastor Dennis Seidel’s church is meeting in-person, and taking temperatures as people enter. The food pantry at Northside Missionary Baptist Church in Grayville offers curbside service, as does the church’s monthly community meal.

Nate Adams, executive director of IBSA, noted that the loosening of limits on gatherings creates breathing space for churches to create responsible plans for reopening. The complexities of those plans were evident as panelists shared how they’re preparing for services.

In Benton, Pastor Sammy Simmons and his church will launch in-person worship June 7, moving from two services to three, and shortening them to allow for cleaning time in between. Simmons, who also serves as president of IBSA, said the church will seat attenders at 33% capacity, and plan for overflow space where the service will be livestreamed.

IBSA is hosting weekly webinars to help churches navigate issues related to COVID-19. Past webinars, along with dozens of resources on reopening, virtual ministry, shepherding from a distance, and the financial implications of the pandemic, are available at IBSA.org/church-helps.